ATLANTA — After record turnout flipped Georgia blue for the first time in decades, Republicans who control the state Legislature are moving swiftly to implement a raft of new restrictions on voting access, mounting one of the biggest challenges to voting rights in a major battleground state following the 2020 election.

Two bills, one passed by the House on Monday and another that could pass the Senate this week, seek to alter foundational elements of voting in Georgia, which supported President Biden in November and a pair of Democratic senators in January — narrow victories attributable in part to the array of voting options in the state.

The Republican legislation would undermine pillars of voting access by ending automatic voter registration, banning drop boxes for mail ballots and eliminating the broad availability of absentee voting. The bills would restrict early voting on the weekends, limiting the longstanding civic tradition of “Souls to the Polls” in which Black voters cast ballots on Sunday after church services.

Taken together, the new barriers would have an outsize impact on Black voters, who make up roughly one-third of the state’s population and vote overwhelmingly Democratic.

Democrats say that Republicans are effectively returning to one of the ugliest tactics in the state’s history — oppressive laws aimed at disenfranchising voters.

“Rather than grappling with whether their ideology is causing them to fail, they are instead relying on what has worked in the past,” Stacey Abrams, the voting rights activist, said, referring to what she said were laws designed to suppress votes. “Instead of winning new voters, you rig the system against their participation, and you steal the right to vote.”

The Georgia effort comes as former President Donald J. Trump continues to publicly promote the lie that the election was stolen from him, which has swayed millions of Republican voters. It has also put further pressure on Republican state legislatures across the country to continue drafting new legislation aimed at restricting voting rights under the banner of “election integrity” as a way of appeasing the former president and his loyal base.

New restrictions on voting have already passed in Iowa, and multiple other states are lining up similar efforts, while the Supreme Court is hearing oral arguments this week on another challenge to the Voting Rights Act. Should the high court make changes to Section 2 of the act, which allows after-the-fact challenges to voting restrictions that may disproportionately affect member of minority groups, Democrats and voting rights groups could be left without one of their most essential tools to challenge new laws. 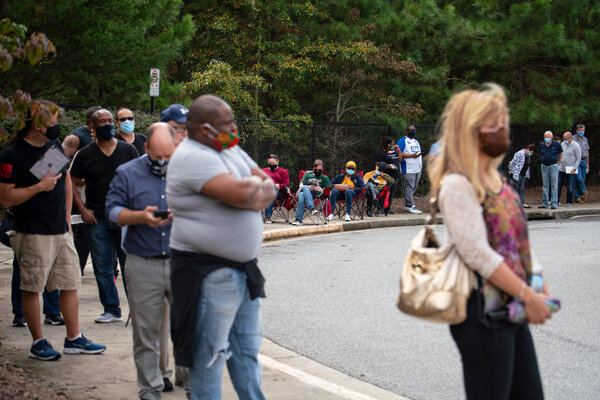 Justice Elena Kagan, in her questioning on Tuesday, appeared to allude to Georgia’s proposed limitations on Sunday voting.

“If a state has long had two weeks of early voting and then the state decides that it is going to get rid of Sunday voting on those two weeks, leave everything else in place, and Black voters vote on Sunday 10 times more than white voters, is that system equally open?” Justice Kagan asked.

For decades, Georgia has been at the center of the voting rights battle, with Democrats and advocacy groups fighting back against repeated efforts to disenfranchise Black voters in the state.

As recently as 2018, Georgians faced hourslong lines to vote in many majority-Black neighborhoods, and thousands of Black voters were purged from the voting rolls before the election. Now Democrats and voting rights groups are alarmed that Republicans are again trying to change the state’s voting laws ahead of critical Senate and governor’s races in 2022.

Though the bills in the Legislature have not been finalized, it is expected they will eventually reach the desk of Gov. Brian Kemp, a Republican. Mr. Kemp has not explicitly backed either bill, but he said on Tuesday morning that he was in favor of efforts “to further secure the vote.”

“I’m supportive of putting the photo ID requirement on absentee ballots by mail and other things, making sure that there’s a fair process to observe,” Mr. Kemp told the radio host Hugh Hewitt. He said his decision on the bills would depend on “what it is and what’s in it.”

Democrats, shut out of power in the Statehouse despite holding both United States Senate seats, are relatively powerless in the legislative process to stop the bills, though they do have avenues through the courts to challenge any final bill signed.

In an interview on Tuesday, Ms. Abrams, the former Democratic minority leader in the Georgia House of Representatives, called Monday’s House vote “a sign of fear” over Republicans’ failure to win support from young and minority voters, two of the fastest-growing sectors of the state’s electorate.

She added that the measure was also potentially self-defeating for the G.O.P. in that large percentages of rural white voters, a traditionally Republican-leaning bloc, could also be impeded by laws that make it harder for citizens to cast absentee ballots and vote by mail.

Asked about restrictions to Sunday voting, Ms. Abrams cited a study by the Center for New Data, a nonprofit group, that found Black voters were more likely to vote on weekends than white voters in 107 of Georgia’s 159 counties. Over all, 11.8 percent of Black voters voted on weekends compared with 8.6 percent of white voters, according to the study.

“We know that some version of this bill is likely to pass because Republicans face an existential crisis in Georgia,” Mr. Abrams said, portraying the party as shortsighted in refusing to address the factors that have put its traditional demographic advantages at risk in recent elections.

Among the most pressing concerns for Georgia Democrats is the possibility that the House’s bill, H.B. 531, might be amended in the Senate to include provisions that put an end to automatic voter registration and a vote-by-mail system known as “no excuse,” which allows any voters to cast mail ballots if they choose. These proposals were included in a bill that passed out of a Senate committee last week.

The automatic registration system, which registers voters when they apply for or renew a driver’s license, was put in place in 2016 under the Republican governor at the time, Nathan Deal.

Georgia’s secretary of state, Brad Raffensperger, another Republican, has credited the system with drastically increasing voter registration numbers, and Republicans have cited such figures to push back against charges leveled by Ms. Abrams and others that Georgia Republicans want to suppress votes.

Mr. Raffensperger took that stance even as he defended Georgia’s electoral system against accusations by Mr. Trump that the election was somehow rigged; his refusal to support the former president’s baseless claims earned him the enmity of Mr. Trump and Georgia Republicans allied with him.

Mr. Raffensperger’s office did not respond to a request for comment Tuesday on the current legislative efforts in the Legislature, including the House bill, which would remove the secretary of state from his role as chair of the State Elections Board.

Cody Hall, a spokesman for Mr. Kemp, repeated an oft-used phrase of his, saying that the governor wanted to make it “easy to vote and hard to cheat” in Georgia.

Kasey Carpenter, a Republican state representative whose district is a conservative swath of Northwest Georgia, said the House bill included a number of common-sense provisions that Democrats would be supporting if it were not for the intense partisan nature of the times. Changes to mail-in procedures, he said, were particularly important given the sharp increase in people who chose to vote that way because of the restrictions of the pandemic.

“I think what you’re seeing is a measured approach,” he said.

For example, Mr. Carpenter said, the bill requires voters to put the number of their driver’s license or state identification card on applications for a mail-in ballot, and requires photocopies to be sent in only if the voter is using alternative forms of identification.

If a highly restrictive bill ends up on Mr. Kemp’s desk, he will be faced with a complicated dilemma.

On the one hand, the governor must show his Trump-loyal Republican base that he has heard and responded to their concerns about election integrity. Doing so will be particularly important if Mr. Trump, who was incensed that Mr. Kemp did not take steps to overturn his electoral defeat in Georgia, carries out his threat to back a primary challenger on Mr. Kemp’s right flank.

On the other hand, if Ms. Abrams chooses to engage Mr. Kemp in a rematch of their 2018 contest, she and her allies are likely to once again make allegations of voter suppression one of their most forceful and incessant attack lines against Mr. Kemp.

In an electorate still reeling from the two-month effort to subvert the election result by Mr. Trump, and the rash of lawsuits attacking voting before and after the election, the bills in Georgia have quickly attracted national attention. More Than a Vote, a group founded by LeBron James, the basketball superstar, has vowed to draw attention to the issue during the N.B.A. All-Star game this weekend in Atlanta; his pledge was first reported by The Atlanta Journal-Constitution.

Voting rights groups note that the severe limitations put on early voting could also have a cascading effect: By limiting the number of hours available for in-person voting, the bottlenecks created during high-volume times and on Election Day would very likely lead to more hourslong lines, like the waits that plagued the Georgia primary in June.

“They’re creating a line management problem,” said Aunna Dennis, the executive director of Common Cause Georgia, a voting rights group. In the primary, she noted, “we saw people in line for over six hours. Just imagine if we were losing 108 hours of early voting time, of Sunday voting, access to the drop box, how many of those people are now going to have to wait in line?”