Her measured performance reflects the way many Democrats view the battle for the Supreme Court: a fight they will lose in service of one they might win. 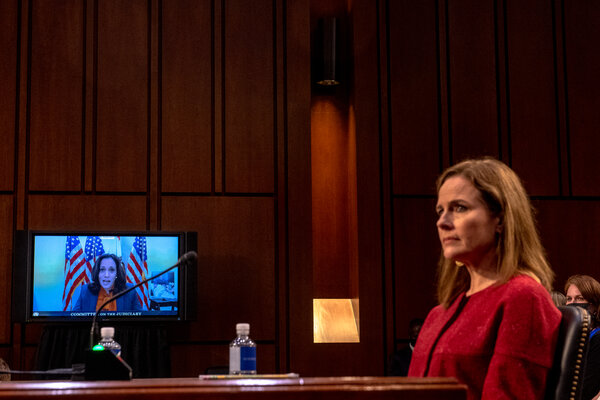 By Sydney Ember and Lisa Lerer

The line was familiar. The follow up was not.

Senator Kamala Harris came ready to press her case against Judge Amy Coney Barrett on the second day of this week’s Supreme Court confirmation hearings, asking if she had been aware of President Trump’s promise to nominate judges who would repeal former President Barack Obama’s signature health care law.

The question concluded with one of Ms. Harris’s characteristic refrains, one she memorably leveled against Justice Brett M. Kavanaugh two years ago: “I’d appreciate a yes-or-no answer, please.”

But unlike then, Ms. Harris let Judge Barrett’s tentative answer slide, hinting at what could become her new professional reality as a No. 2 to the most powerful man in politics.

Before joining the Democratic ticket as Joseph R. Biden Jr.’s running mate, Ms. Harris was known as a politician with a withering prosecutorial style and a skill for crafting viral clips. She built her national brand on high-stakes moments — judiciary hearings, the Democratic primary debate stage — that she molded to her advantage, her years as a district attorney on display as she grilled adversaries.

Now she is trying to balance her penchant for forceful exchanges with her duties as the vice-presidential nominee. After all, being vice president means checking your ego at the Oval Office door.

From her opening remarks to her questioning on Wednesday, she cut a more restrained profile, using her platform at the confirmation hearings to amplify Mr. Biden’s message while studiously avoiding any maneuvers that could jeopardize his lead in the polls. Even her decision to monitor the proceedings from her Senate office rather than in person because of the dangers posed by the coronavirus reinforced Mr. Biden’s case that his administration would be a more responsible steward of public health than Mr. Trump’s.