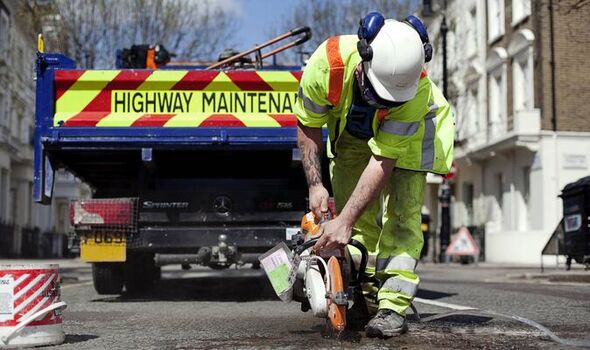 The crackdown will make it easier for authorities to punish Gas, electricity, water and communications companies if they leave highways in a shoddy state.

Companies in England already face fines, court action and bans from future work if they fail to restore roads properly.

The Department for Transport said that new standards will be introduced to force contractors to make sure surfaces do not crumble soon after work is completed.

Concerns have been growing about the state of local roads with some 1.7 million potholes filled in by councils in England and Wales last year.

According to the Asphalt Industry Alliance councils spend almost £100 million filling potholes, which also risk injuries to cyclists and cause damage to cars.

Critics say that roads have been left in a poor state by years of underfunding and pressure on council budgets.

It is expected the new law change could prevent thousands of potholes being left behind by utility companies nationwide and will ensure more roads are resurfaced to a high standard.

A new performance-based inspections regime will be introduced, where the worst performing utility companies whose road works fail to meet strict standards will face financial penalties.

These companies will go on to be inspected more regularly by local authorities to ensure their work meets rigorous criteria and they leave roads in a good condition.

While the majority of companies carry out street works to a high standard and pass inspections, utility companies are on average failing 9 per cent of the inspections that are carried out.

The worst performing utility company is failing a significant 63 per cent of its inspections.

Transport Secretary Grant Shapps said: “The plague of potholes is the menace of our roads. That’s why I’m ensuring companies who create them and leave roads in a poor state can be held to account more easily – protecting drivers from unfair repair costs.

“We’ve already invested billions of pounds into roads maintenance, helping local authorities keep their highways well maintained, and I’ll continue working to make sure all road-users around the country can enjoy the safe, world-class infrastructure they deserve.”

The move follows the Government investing more than £5 billion over 2020-2025 into highways maintenance, including the Potholes Fund announced at Budget 2020.

This funding settlement allows local authorities to plan effectively for managing their roads and is enough to fill millions of potholes a year, repair dozens of bridges, and resurface roads up and down the country.

The measures will also help to ease congestion on roads up and down the country.

Companies will now be required to provide local authorities and the Department for Transport’s street manager service with more up to date and accurate data on live road works.

This will update sat navs and other apps so motorists are aware of where road works are happening and can avoid those areas – preventing traffic from building up.

Plans will also help speed up broadband rollout across the country, through exemptions to restrictions on works for new customer connections.

One third of all road works are carried out by telecoms operators.

The Government will allow exemptions to restrictions which prevent or slow down these companies applying to carry out necessary works.