Sky News’ James Matthews quizzed Cabinet Secretary for Health and Sport Jeane Freeman as she held the Friday Scottish Covid briefing. Mr Matthews questioned whether SNP leader Nicola Sturgeon should resign if it is found that she did mislead Parliament. Ms Freeman sharply snapped at the journalist and insisted that she would not be commenting.

While saying she would not comment on the issue, Ms Freeman did go on to say that she still believed Ms Sturgeon did not mislead Parliament and that she should not resign.

Mr Matthews said: “Should the First Minister resign after being found to have misled Parliament?

“If Nicola Sturgeon so instantly and quickly dismisses that finding by the harassment committee, what was the point of the enquiry in the first place?

Ms Freeman replied: “Before I say anything I must say that this is a Covid briefing and that is what I am here to answer questions on. 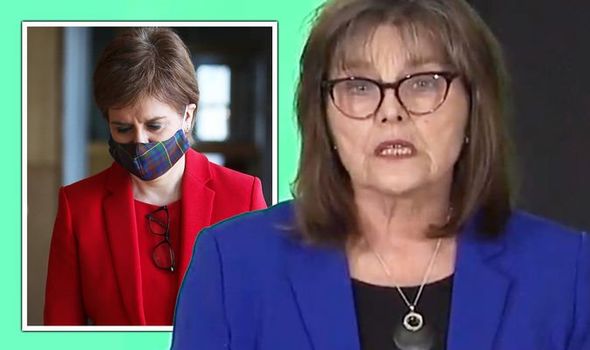 “I am not going to comment on unattributed things about a report that has not yet been published.”

Ms Freeman then cut to ITV journalist Peter Smith who also asked a question regarding the resignation of Ms Sturgeon.

He said: “Further to that point, the Parliamentary enquiry was set up to try and get to the bottom of this.

“Then if we can’t have faith in the Parliamentary enquiry and our First Minister has misled Parliament what faith can Scotland have in our democratic institutions?

Ms Freeman then reiterated her previous comment to Mr Matthews.

She said: “Peter, let me repeat that this is Covid briefing and I am the Health Secretary.

“I am not dismissing anything, what I am saying to you is that the report has not yet been published.

“I am saying that I am not going to comment on unpublished reports or unattributed briefings on anything.

“What I am here to do is talk to people who are watching about where we are on one of the most important things in their lives and mine.”