The 53-year-old Welshman who regularly berates MPs outside the House of Commons has become notorious post the 2016 Brexit referendum. Dubbed the “stop Brexit man” for his repeated jeers over a megaphone, for many, Mr Bray has become an unwelcome feature of Westminster in recent years.

And in an extraordinary admission, he now says his protest is even getting on his nerves.

Speaking about his regularly loudly played parody song “Bye Bye Boris”, the public nuisance told The Guardian: “I’ve played it so much it’s driving me nuts.”

“We’re about getting the message out,” he said.

“I know how much money the European Union had put into Port Talbot, one of the most deprived areas of the United Kingdom, and I was shocked at people there: that the majority voted to leave. Criticising the Vote Leave campaign, he added: “What they promised, I knew there was no way they could deliver it.

“I’m not an economist but I knew from the get-go it was all lies.

“Here we are, and it’s actually worse than I expected.”

The loudmouth campaigner has annoyed MPs and parliamentary staffers alike.

He regularly chastises politicians as he chases them down the street, videoing as he heckles them over the UK’s record outside of the EU bloc. 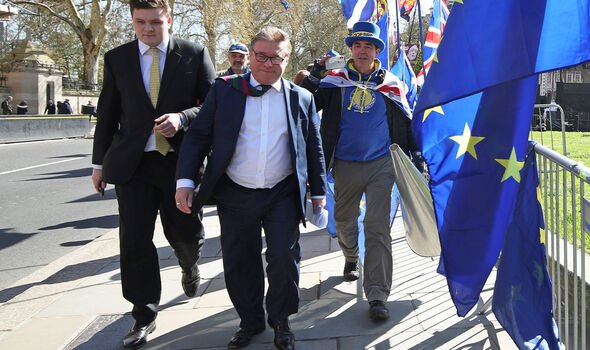 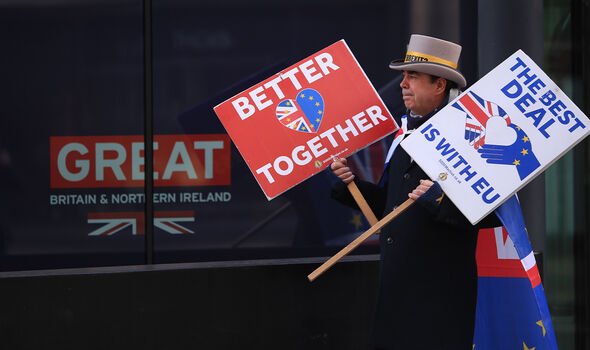 And researchers on the Westminster estate have moaned about difficulties concentrating at work.

Earlier this year, Dudley North MP Marco Longhi called for the police to finally put a stop to the endless protest.

Speaking in the House of Commons he said the noise from the protester had made “working here more bearable for our own staff, and myself and my colleagues”.

“There is a noisy man outside who dresses up as a clown, who harasses and chases members of parliament and our staff from his little camp on the crossing island on Parliament Street.

“He’s someone else who serves no public benefit whatsoever,” he said.

“I mean this when I say that my staff cannot hear distressed constituents on the phone through the awful racket he causes.

“All of our staff who have offices in One Parliament Street are caused considerable stress by the disruption he causes their and our work.

“And I have no doubt that staff in DCMS and HMRC – buildings opposite – would say anything different.”

Earlier this month the Met police seized Mr Bray’s amplifiers in a bid to dampen the intrusion the protest caused.

He returned again the next day with a new amp.