The latest Ipsos poll found Emmanuel Macron would lose his presidential seat to National Rally leader Marine Le Pen. The eurosceptic politician would beat the French President by 1.5 percent of the votes in the first round, at 26.5 percent.

Mr Macron would come second with 25 percent, followed by Bertrand, Jadot and Melenchon respectively placed with 15, 10 and 10 percent of the votes.

The right-wing nationalist was also poised to take a record-high share of the vote in a final-round presidential run-off, according to a survey by The Harris Interactive.

The poll put Ms Le Pen close on the heels of the French president with 48 percent of the vote if the election took place today while Mr Macron would be narrowly re-elected with 52 percent.

The worrying polling for Mr Macron comes as Ms Le Pen criticised him for not closing French borders quickly enough amid the coronavirus pandemic. 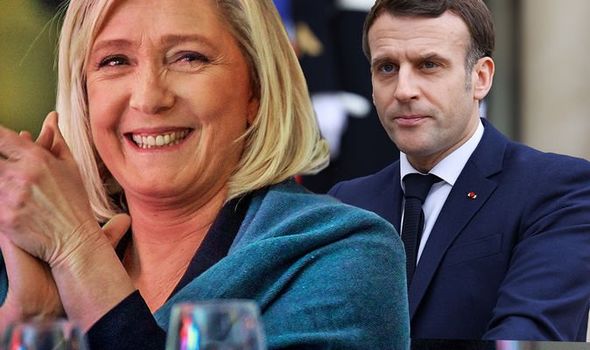 The two leaders in France are set for a long war of words ahead of the vote in 2022, but Mr Macron has also faced pressure from his own party in recent months.

In 2017, Mr Macron, who at the time was a debutant politician running as an independent candidate, crushed Ms Le Pen with 66 percent to her 34 percent.

The first round of the presidential election is due to take place in April 2022.

The second round is held two weeks later between the two candidates who receive the most votes.

During his presidency, Mr Macron has had to grapple with the coronavirus pandemic.

France has been one of the worst-hit countries, with the sixth-highest number of cases and seventh-highest death toll.

The movement started in November 2018 and has seen violent clashes between demonstrators and police.

The protests were sparked by fuel price rises but have since become a broader movement.