Attorney General Merrick B. Garland met with news media executives amid fallout over prosecutors’ seizures of records from phone and tech companies for leak inquiries. 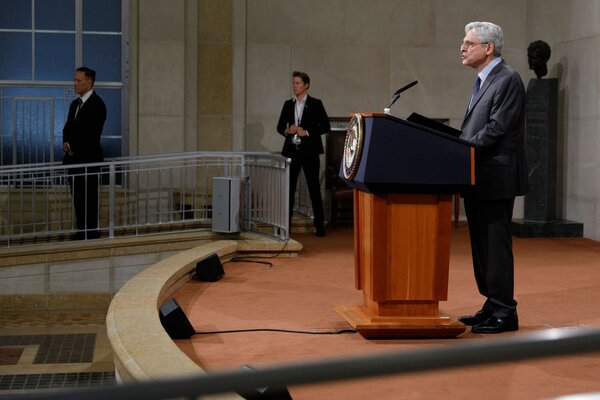 WASHINGTON — The Justice Department will tighten its rules for when law enforcement officials may seize information about members of Congress and their aides, Attorney General Merrick B. Garland said on Monday amid a backlash to the disclosure of a 2018 subpoena that swept in data from the Apple accounts of Democratic lawmakers and staff.

Later in the day, Mr. Garland also met with leaders of The New York Times, CNN and The Washington Post after the disclosure that the Trump Justice Department had secretly seized phone records of reporters at each outlet in search of their sources. President Biden and Mr. Garland have said that prosecutors will no longer be permitted to use that tactic.

The two events underscored how recent revelations displaying the power of prosecutors to secretly seize records from phone and technology companies for leak investigations has become a major political headache for the Biden-era Justice Department, even as many questions remain about the context.

David McCraw, a Times newsroom lawyer who attended the meeting with its publisher, A.G. Sulzberger, portrayed the discussion — about restricting the ability of leak hunters to go after reporters’ data — as positive. Under an agreement, news executives were permitted to disclose what they said, but Mr. Garland’s responses were off the record.

“We presented our case for why we needed accountability for what happened,” Mr. McCraw said. “We also pushed the idea that these changes, that the president and the attorney general have spoken of, become institutionalized. We were very encouraged by what we heard.”

The meeting came hours after Mr. Garland had addressed the political uproar over the subpoena for congressional information, which The Times reported last week. He said he had asked his deputy, Lisa O. Monaco, to review and toughen the department’s existing policies “for obtaining records of the legislative branch,” noting that she was “already working on surfacing potentially problematic matters deserving high-level review.”

Mr. Garland added: “Consistent with our commitment to the rule of law, we must ensure that full weight is accorded to separation-of-powers concerns moving forward.”