Chancellor Kwasi Kwarteng said plans to drop the tax rate was taking away from a “strong package” aimed at pursuing economic growth for the whole of the UK. Mr Kwarteng has been facing intense backlash over his mini-budget, with colleagues threatening to sink the policy in Parliament unless the Government agreed to a U-turn. The Chancellor proceeded to dismantle his own proposal as a “distraction”, with BBC Breakfast host Jon Kay questioning him over his credibility now he had been forced to change his mind.

“We talked to constituents, we were talking to a whole range of stakeholders and we felt the 45p issue was drowning out a strong package of intervention on energy, on tax cuts for people generally. And we decided not to proceed with getting rid of the 45p rate.”

But Mr Kay noted: “It’s hard to think of a U-turn on this scale in recent political history. Where does this leave your credibility as Chancellor?” 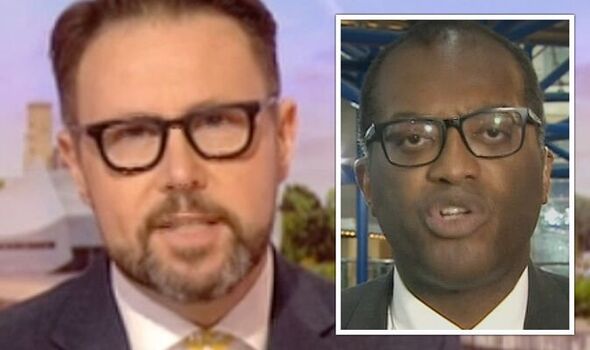 The Chancellor defended his position: “We’re 100 percent focussed on the growth plan.

“And I’ve been in Parliament 12 years, there’s been lots of policies which, when Government listens to people, they decided to change their minds.”

Mr Kwarteng suggested he told Prime Minister Liz Truss they needed to U-turn on the abolition of the top rate of income tax for the highest earners.

The Chancellor told Mr Kay “the Prime Minister decided not to proceed with the abolition of the rate”.

When pressed if it was her U-turn, he said: “No, we talked together, I said this is what I was minded to do and we decided together, we were in agreement that we wouldn’t proceed with the abolition of the rate”.

He later added: “The conversation about the 45p rate was this terrible distraction really from what was a very, very strong plan and I’m very pleased that we’ve decided not to proceed with that because it was drowning out the elements of an excellent plan.”

If Labour really has a 33-point lead, the Tories face total wipeout [INSIGHT]
Truss crisis as poll shows under-45s think Labour is more patriotic [REVEAL]
Have your say on whether Chancellor should cut tax for highest earners [REACT]