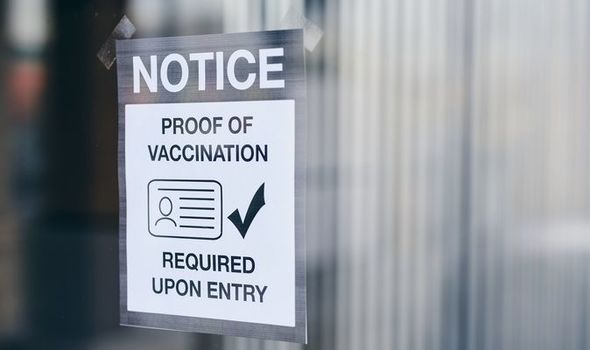 Robert Oulds is alarmed that European Commission president Ursula von der Leyen has said the EU must consider mandatory vaccination. Austria has announced that inoculations will be compulsory from February 1, and countries including Indonesia and Turkmenistan have made Covid-19 vaccinations mandatory. Greece is making the jabs compulsory for the over-60s and in Germany supporters of mandatory vaccination include former Chancellor Angela Merkel.

The Bruges Group’s Mr Oulds said: “Europe is now in real danger of sliding back to 1930s totalitarianism… Remainers in the EU referendum constantly told us that our human rights depended on Brussels.

“Well, thank goodness for Brexit. Although the UK Government has imposed various restrictions on liberty since the Covid outbreak last year, it has not threatened to force injections on British people. Perhaps we shall see an inflow of refugees from EU nations, as citizens try to avoid whatever punishments are meted out for failure to comply with [a] vaccination regime.”

Health Secretary Sajid Javid has said that mandatory vaccinations are “unethical” and “wouldn’t work”, although Boris Johnson triggered speculation that he could be open to a new approach to protecting people when he described the need for a “conversation about ways in which we deal with this pandemic”.

Former Olympic rower Alex Story, who now lives in Austria, warned that the “continent is fast sinking into a dystopian nightmare”.

Describing the impact of the planned mandatory vaccine in Austria, he said: “What happens though if one of member of your family, whom you love, is reluctant to take the vaccine and you are not? Both of you are ostracised.”

Urging Britain not to follow Austria’s example, he said: “For those who can see where this is going, they should do what they can to make sure that Britain remains the beacon of hope in an ever darkening world and avoid wielding the state’s hammer to smash our fragile freedoms.”

The prime minister’s official spokesman last week said he thought Mr Johnson has been “clear that he didn’t want us to have a society and culture where we forced people to get vaccinated”.

The European head of the World Health Organization has said that mandatory vaccinations should be an “absolute last resort”.