WASHINGTON — As federal investigators in Delaware were examining the finances of Hunter Biden during his father’s campaign for president, a similar inquiry ramped up this year in Pittsburgh, fueled by materials delivered by President Trump’s personal lawyer Rudolph W. Giuliani.

Attorney General William P. Barr had asked the top federal prosecutor in Pittsburgh, Scott W. Brady, to accept and vet any information that Mr. Giuliani had on the Biden family, including Hunter Biden. Mr. Brady hosted Mr. Giuliani for a nearly four-hour meeting in late January to discuss his materials.

The arrangement immediately raised alarms within the F.B.I. and the Justice Department. Mr. Giuliani had served as Mr. Trump’s attack dog during the Russia investigation before becoming the face of an effort to tarnish Hunter Biden during President-elect Joseph R. Biden Jr.’s campaign. If Mr. Brady’s investigation became public, the agents feared that the F.B.I. could be drawn into a politically toxic battle in the midst of the presidential election, just as it was in 2016.

The officials worried about how the Justice Department, which they saw as trying to placate the president, would handle the inquiry. Some prosecutors and agents in Pittsburgh regarded Mr. Brady as a Trump loyalist who was thought to be angling to run for office, and they expressed concern that Mr. Brady was wielding the F.B.I. as a weapon to damage Mr. Biden’s candidacy. At one point, Mr. Brady made clear that he wanted the U.S. attorney in Delaware, David C. Weiss, to continue his investigation, even though Mr. Brady is not authorized to direct other federal prosecutors’ offices.

This account is based on interviews with five current and former law enforcement officials and others with knowledge of F.B.I. interactions with the Justice Department. Most spoke on the condition of anonymity to discuss continuing federal investigations.

Mr. Giuliani himself was also the focus of a criminal investigation in New York over his dealings in Ukraine, including his effort to oust the American ambassador to the country, which was at the heart of the impeachment trial. And the Pittsburgh investigation appeared to be parallel to the existing inquiry in Delaware.

Mr. Brady has not brought any criminal charges, and Mr. Barr has not publicly discussed the investigation’s status since revealing in February that the department would accept Mr. Giuliani’s material.

Hunter Biden disclosed this week that prosecutors in Delaware were continuing to investigate him for possible federal tax crimes, serving multiple subpoenas on Tuesday to Mr. Biden and his business associates after apparently going dormant in the run-up to the election. The investigation appeared focused on his dealings with China and with Burisma Holdings, the Ukrainian gas company on whose board he served, according to people familiar with the matter.

Legal experts said that prosecutors could be examining how Mr. Biden obtained the money to pay hundreds of thousands of dollars in tax liens this year.

The president-elect is not under investigation. But the disclosure of a criminal inquiry into his son thrust Mr. Biden into a charged position as he prepares to take office. Republican senators called for an independent special counsel to investigate Hunter Biden, and Mr. Trump complained that the Delaware inquiry did not surface before the election.

The F.B.I. and the Justice Department declined to comment. Mr. Giuliani did not respond to a request for comment.

In 2018, the F.B.I. and the U.S. attorney’s office in Wilmington, Del., quietly began investigating whether Hunter Biden had violated money laundering laws, according to people with knowledge of the inquiry.

Investigators eventually determined that the money laundering aspect of the Hunter Biden inquiry was not going to lead to charges. But they had discovered potential tax law violations and felt they had the makings of a strong tax case against him, according to several people familiar with the matter. The inquiry came to involve I.R.S. agents.

Separately, Mr. Giuliani was collecting information in Ukraine that could benefit Mr. Trump by hurting his perceived rivals, including Mr. Biden. Mr. Giuliani had tried to promote scrutiny of Hunter Biden’s work for Burisma, which had been mired in a corruption scandal. He accused Joseph R. Biden Jr. of corruptly pushing for the ouster of Ukraine’s top prosecutor, who had been investigating Burisma, as a favor to his son while he was vice president. No evidence of wrongdoing by the president-elect has emerged.

Mr. Trump’s pressure campaign on the Ukrainian government to announce investigations that could help him politically was the focus of his impeachment. Mr. Giuliani sought during impeachment to equate his allegations about Hunter Biden with the accusations that Mr. Trump had abused his power.

He also continued to wage his campaign to further any investigations that could benefit Mr. Trump by damaging his opponents. Mr. Giuliani’s lawyer, Robert J. Costello, asked the Justice Department for a meeting to discuss what he felt was explosive information about Hunter Biden that he had gathered from people in Ukraine and elsewhere, according to a person with direct knowledge of the matter. 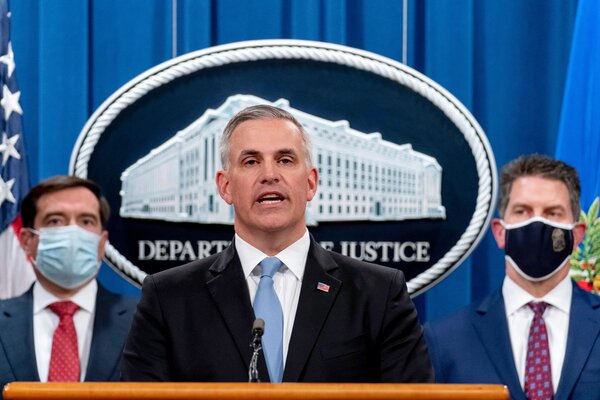 In response, Mr. Brady called Mr. Costello and offered to meet. Mr. Giuliani and Mr. Costello sent reams of documents to Pittsburgh, then traveled there on Jan. 29. They were picked up by F.B.I. agents and stopped for breakfast before meeting for nearly four hours at the local F.B.I. office with Mr. Brady and his top deputies on the inquiry, Stephen Kaufman and Ira Karoll, the person said.

Mr. Costello had several ensuing conversations with Mr. Brady’s office, including as recently as this summer, about the Bidens. Mr. Costello and Mr. Giuliani also recommended a handful of potential witnesses in the United States and Ukraine for the F.B.I. to interview, but Mr. Costello said the F.B.I. never followed through.

“The choice of which U.S. attorney’s office investigates a matter is left to the Justice Department, and not the F.B.I.,” Mr. Costello said, adding that no one from the F.B.I. or Mr. Brady’s office raised any concerns with them about their material on the Bidens. “It is inappropriate for the F.B.I. to question Justice’s decision.”

At a news conference about a week after the meeting, Mr. Barr announced that he had created an intake process for information about Ukraine to “assess its provenance and its credibility.”

He did not mention Pittsburgh, nor the meeting. Mr. Barr cautioned that investigators had to be careful about any information coming from Ukraine, including from Mr. Giuliani. “There are a lot of agendas in the Ukraine, a lot of crosscurrents,” Mr. Barr warned. “And we can’t take anything we received from Ukraine at face value.”

It was not clear why Mr. Barr assigned the task to Mr. Brady, but he has farmed out other politically sensitive investigations to trusted U.S. attorneys outside Washington.

Investigators considered Mr. Barr’s decision to empower Mr. Brady as highly unusual because prosecutors in Delaware had already been scrutinizing Hunter Biden for more than a year.

Colleagues saw Mr. Brady, whom Mr. Trump nominated to the post in 2017, as a deeply partisan leader. While an assistant prosecutor in the office during the George W. Bush administration, he said he would never serve a Democrat, and he left after former President Barack Obama was elected.

After he returned to lead the office, some prosecutors grumbled about his approach to prosecutions, including the Hunter Biden inquiry. Amid the discontent, Mr. Kaufman, the longtime career prosecutor who served as his top deputy, was marginalized after relaying objections to Mr. Brady. Mr. Karoll, a young lawyer who had joined the office in 2017 from the Jones Day law firm, was elevated.

The investigation in New York into Mr. Giuliani also

set up a potentially messy situation that might allow him to leverage the work in Pittsburgh — and his role as a potential witness in any case — against a prosecution in New York.

Federal law enforcement officials also feared that Mr. Giuliani was submitting questionable information to the Justice Department to make it seem more credible than it really was. They said that it was impossible to separate his efforts from his crusades on behalf of the president, and some told associates that he could damage the department’s credibility by forcing investigators to examine issues that seemed like nothing more than conspiracy theories.

The steps were outside “normal investigative procedures,” one former senior law enforcement official with knowledge of the events said, particularly in an election year; Justice Department policy typically forbids investigators from making aggressive moves before elections that could affect the outcome of the vote if they become public.

The Pittsburgh F.B.I. office refused to comply without the approval of David L. Bowdich, the F.B.I.’s deputy director, the former official said.

Mr. Brady’s demands soon prompted a tense confrontation with F.B.I. officials at the bureau’s headquarters in Washington. The meeting was mediated by Seth D. DuCharme, now the acting U.S. attorney in Brooklyn and at the time a trusted aide and ally of Mr. Barr’s at the Justice Department in Washington.

The F.B.I. viewed the investigative steps into Mr. Biden that Mr. Brady sought as unwarranted because the Delaware inquiry involving money laundering had fizzled out and because they were skeptical of Mr. Giuliani’s material. For example, they had already examined a laptop owned by Mr. Biden and an external hard drive that had been abandoned at a computer store in Wilmington and found nothing to advance the inquiry.

Investigators were also worried that the effort might become public — particularly any interviews of witnesses who were Mr. Giuliani’s sources of information — and could drag the F.B.I. back into presidential campaign politics, the same turbulent path it had stumbled down in 2016 with investigations into Hillary Clinton’s private email server and the Trump campaign’s ties to Russia.

Still, Mr. Brady pressed the F.B.I. to do more, officials said. The agents found ways to ostensibly satisfy Mr. Brady without upending the election. It is not clear how they compromised, but agents could have investigated more discreetly, like questioning witnesses they were confident would keep quiet or checking databases.