“The charges against them are illegitimate. They’re unfounded. Their incarceration is completely unacceptable, completely inappropriate.

“That is a completely separate issue to the legal dispute, which is still ongoing with Iran, this multi-decades long legal dispute. And Iran should absolutely not be linking the two.

“So we’re saying that the British Nationals should be released. And that is that and we are working through this historic legal dispute with Iran. And they are and they are separate issues, and Iran should not be trying to link the two.”

Ms Zaghari-Ratcliffe, 42, a charity worker from London, has been held in Iran since 2016.

She completed a five-year sentence for spying charges, which she has always denied, in March but last week was given an additional one-year jail term. 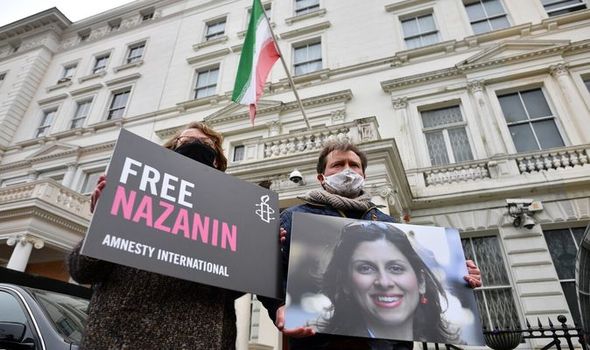 Hopes were raised that she would soon be freed when Iranian state TV reported that the UK had agreed to pay the £400 million to see the release of Ms Zaghari-Ratcliffe.

The legal dispute dates back to the 1970s when the then-shah of Iran paid the UK £400 million for 1,500 Chieftain tanks.

Britain refused to deliver the tanks to the new Islamic Republic when the shah was toppled in 1979, but kept the cash despite British courts accepting it should be repaid.

But Mr Cleverly said the Iranian regime uses “disinformation” and there had been “inaccurate reports coming out over the last couple of days”.

“On the one hand, they are saying that these proceedings are legitimate, we don’t agree with that at all, but then also saying that they are linked to this legal dispute – it can’t be both,” he added.