Nicola Sturgeon insisted Rishi Sunak has to “pay up” and show the UK Government is supporting Scotland through the pandemic. The Chancellor on Thursday announced a new series of job supporting schemes aimed at helping workers cope with the pressure of the tiered restrictions London has imposed across England.  But Ms Sturgeon insisted the nation as seen “not a penny so far” in support as he demanded further action to help Scotland face the financial consequences of the coronavirus pandemic.

As she announced new support measures for business, Ms Sturgeon said: “This support package matches that announced by the Chancellor for businesses in England. Businesses in Scotland deserve nothing less but there is one point I am duty-bound to make today.

“The Chancellor’s commitment to England was open-ended, he will pay whatever the demand for business is for as long as necessary.

“I think that’s right and proper. He’s able to do that because he can borrow the money to do it. The Scottish Government can’t do that.

“We have to rely on the Chancellor to provide the same funding guarantees to Scotland businesses has he already has for businesses in England.

JUST IN: France threatens EU27 WALKOUT in fury over more Brexit talks ‘October was the deadline!’ 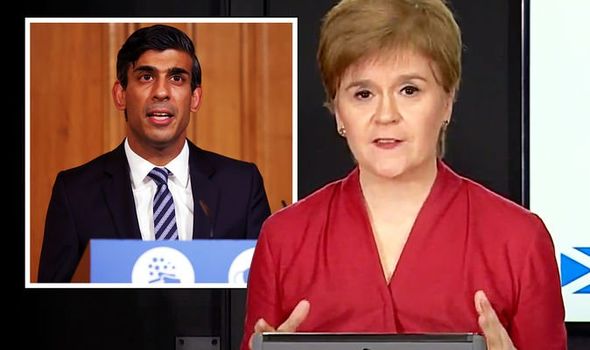 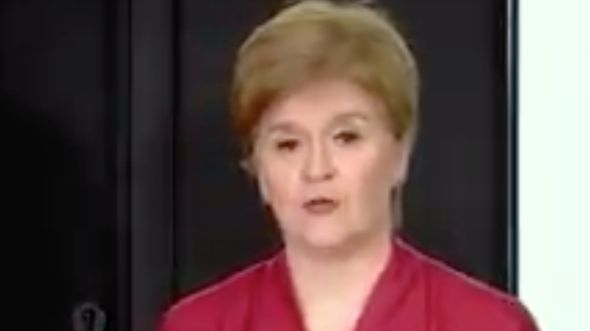 “So far he hasn’t been done, not a single penny of extra funding beyond that already allocated has been guaranteed to Scotland as a result of yesterday’s announcement.”

Under the Barnett formula, spending decisions announced across England trickle down to the devolved nations with the Treasure giving set shares to national parliaments to spend.

However, the rule applies in normal times and a total cost is usually available but not under Chancellor Sunak’s pledge to do “whatever it takes” to save British businesses.

The move has left Holyrood wondering how much Scotland will be effectively allocated, especially as the Treasury has insisted Edinburgh should fund its own grants through the £700 million in additional fundings announced in September.

The Scottish First Minister continued: “While I am not prepared to offer businesses here less funding than their counterparts in England will get, I have to be clear on this point.

“Without a resolution to the problem I’ve just highlighted, the money the Scottish Government has to pay for these grants will eventually run out.

“It’s not possible to fund indefinitely demand-led commitments out of a fine budget with no powers to borrow.”