Health departments scrambled to postpone vaccine clinics and rebook patients after the one-dose offering from Johnson & Johnson was sidelined. 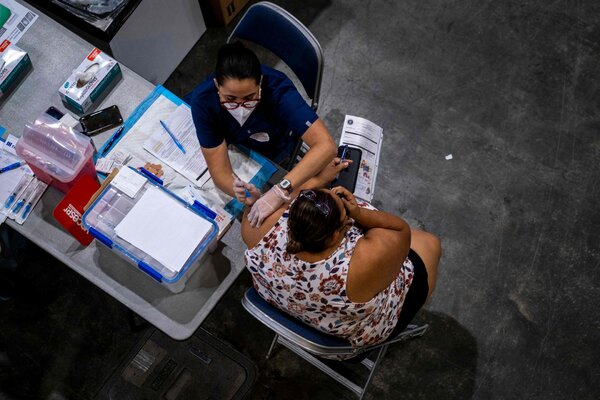 CHICAGO — The student union had been converted into a vaccination center. The doses had arrived on campus. The first appointments were minutes away. Then, at 7:23 a.m. on Tuesday, news of the pause in Johnson & Johnson vaccinations reached Youngstown State University.

“We were ready to go,” said Shannon Tirone, an associate vice president at the university, in eastern Ohio, who instead started calling students to tell them they would not be able to get the vaccine after all.

Similar scenes played out across the country as the abrupt halt in the use of the Johnson & Johnson vaccine because of concerns about potential blood clots upended plans to vaccinate some of the country’s hardest-to-reach populations.

In California, mobile vaccine clinics in rural areas were canceled. In Chicago, vaccination events for restaurant employees and aviation workers were postponed indefinitely. And at colleges in Ohio, New York and Tennessee, where the one-dose vaccine offered a chance to quickly inoculate students before they left campus for the summer, appointments were called off en masse.

“It really fit into this kind of tight deadline we were doing,” Ms. Tirone said of the Johnson & Johnson vaccine. She said she hoped to offer another on-campus clinic in Youngstown with one of the two-dose alternatives, but she worried that students would not be eligible for a second dose until finals week or later.

At the White House, Biden administration officials played down the effect of the Johnson & Johnson pause and pledged to help states with the logistics involved in rescheduling patients to receive shots from Pfizer and Moderna, the two other coronavirus vaccine manufacturers authorized by the Food and Drug Administration.