Penny Mordaunt has emerged as a top contender to take over the leadership of both the Conservative Party and the UK in the ongoing Tory leadership race to succeed Boris Johnson. However, former Brexit Secretary Lord Frost cast doubts about Ms Mordaunt’s suitability to lead as he discussed his personal experience working with the international trade minister. The peer said he had “great reservations” about her ability to “take tough decisions” as he questioned her record in the Brexit negotiations with the European Union.

Speaking to TalkTV, Lord Frost said: “I have worked with Penny. To be honest, I’m quite surprised she is where she is in this leadership race.

“She was my deputy, notionally more than really, in the Brexit talks last year. I felt she did not master the detail that was necessary in the negotiations.

“She wouldn’t always deliver tough messages to the European Union when that was necessary. I’m afraid she wasn’t fully accountable, fully visible.

“Sometimes I didn’t even know where she was and I’m afraid this became such a problem that after six months I had to ask the Prime Minister to move her on and find somebody else to support me.”

JUST IN: ‘Still trying to split the country!’ Ranvir Singh slapped down by Coffey over Brexit probe 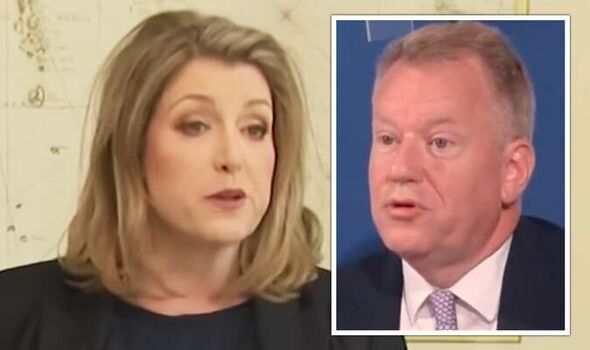 He continued: ” You have to remember this was a time when we were in a major confrontation over Northern Ireland, it was extremely difficult.

“I’m afraid we weren’t just getting what we needed.