The Prime Minister will go head to head with his political rival after Keir Starmer’s party unveiled its plan for Britain’s exit from the EU more than six months after he got into power. Speaking of the policy, Shadow Minister for the Cabinet Office Rachel Reeves said under a Labour government, the UK would have a “close relationship” with the bloc but finally admitted the nation would not return to the Union.

The Labour MP told Labour list: “Under a Labour government, we will have a close relationship with the EU but we won’t be back in the EU.

“I know that is something that is sad and difficult to come to terms with for a lot of us, but I think that is the reality we have to face up to.”

It comes as Mr Johnson prepares to unshackle the UK from the Brussels club in January after Britain’s standstill transition with the bloc ends on December 31. 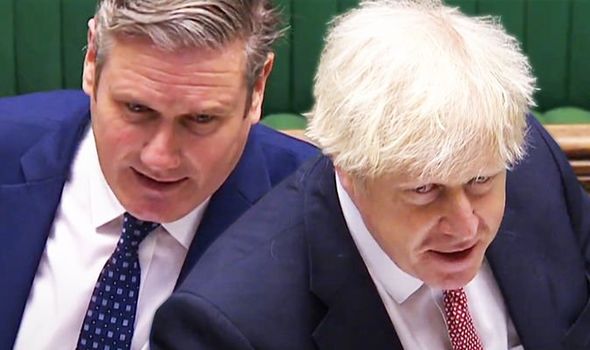 Responding to Mr Johnson’s Tory conference speech, Labour leader Sir Keir Starmer focused on coronavirus, saying: “I think that what NHS workers on the front line and the country want from the Prime Minister is a frank acknowledgement that there are real problems with the Government’s approach.

“What people, I think, wanted was a frank acceptance that those problems are there and a road map to get out of where we are now, a road map, if you like, from here through to when we get a vaccination.”