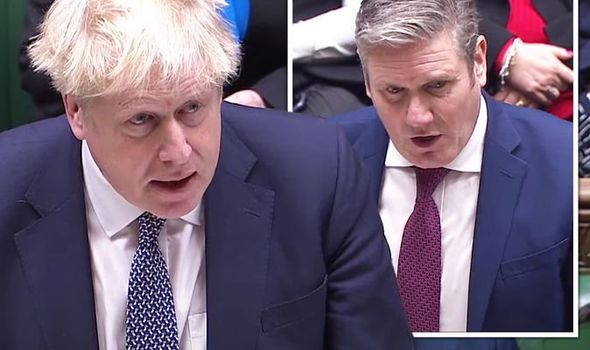 Labour leader Sir Keir Starmer missed last week’s PMQs because he tested positive for Covid for the second time. However, it has now been confirmed that he has returned two negative tests on days six and seven which means he will be able to go head to head against the Prime Minister in today’s session. Two sources have told the Telegraph that Mr Johnson could attempt to ease the blow by releasing a statement before PMQs explaining his position. Meanwhile, there has been feverish speculation that a photo of the May 20 party might exist and be leaked in time for this afternoon’s debate with many fearing Sir Keir could wave the print around the despatch box.

‘Strong rumours’ PM will make statement ahead of PMQs

Political journalist Christopher Hope has reported “strong rumours” that Boris Johnson will release a statement ahead of PMQs today about the partygate scandal.

The move would likely be an attempt to alleviate some of the pressure Sir Keir Starmer intends to inflict this afternoon.

‘We are f*****, everyone knows it happened,’ cabinet minister sweats ahead of PMQs

Members of the Cabinet reportedly want the Prime Minister to issue a heartfelt apology to the British public.

A Cabinet minister told the Times: “It’s not terminal yet — there’s still room for humility and a heartfelt apology.

“We’re f***ed unless we resolve it. Everyone knows this thing happened; nobody is disputing that.

“The row has moved on from whether the party took place to questions around denial and prevarication.

“PMQs will be agonising. We f***ed up. It doesn’t have to be terminal if he’s prepared to take his medicine. But it’s unquestionably done harm.”

The attendance of the leader of the opposition was called into question after he tested positive for Covid last week.

However, he has now returned two negative tests and will attend the House of Commons to go head to head against Boris Johnson at 12pm.

Tories hide from the media ahead of PMQs

The Conservative party has refused to send a representative on the morning broadcast round ahead of today’s PMQs.

Deputy Labour Leader Angela Rayner and Liberal Democrats Leader Ed Davey are being given a free hit as the Government remains unable to defend their position.