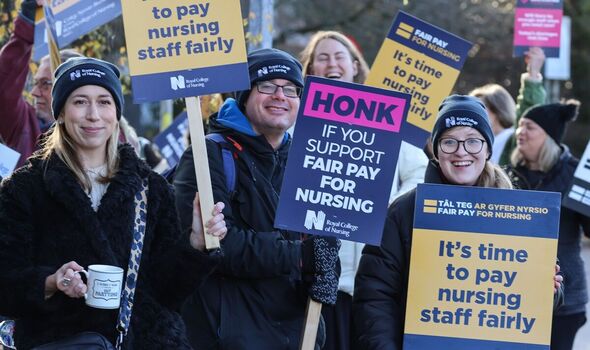 Those calling for tough new laws making strikes illegal for key workers outnumber those opposed, new polling shows. It comes as nurses’ leader Pat Cullen insisted nothing could prevent walkouts planned for January 18 and 19 going ahead, even though she is to attend talks with Health Secretary Steve Barclay on Monday.

Ms Cullen, General Secretary of the Royal College of Nursing (RCN), said: “We’ll of course go to the meeting and make the case for nursing in all forums, but it’s sadly not what’s going to prevent strike action that’s planned for 10 days’ time.”

Ministers are gearing up for a huge battle over laws introducing minimum service levels in vital services, effectively preventing strike action which threatens to bring them to a halt.

Legislation to be introduced “in the coming weeks” will restrict strikes in fire, ambulance and rail services, the Government said. Unions representing workers in other parts of the NHS, education, nuclear decommissioning, other transport services and border security will be expected to reach voluntary agreements, with the threat that legislation will be extended to their members if they refuse.

A survey by Redfield and Wilton for the Sunday Express found 36 percent back making it illegal for essential workers to strike, with 34 percent disagreeing.

Labour leader Sir Keir Starmer is opposing the plan and has vowed to axe the Government’s legislation if his party wins the next general election.

Stephen Flynn, the SNP’s Westminster leader, has written to Sir Keir to request a meeting discussing how they can join forces to block anti-strike laws when they are debated in Parliament. He told Sir Keir in the letter: “I genuinely hope that, when it comes to this immoral Tory attack, we can find common cause and work together.”

In a further headache for Mr Sunak, junior doctors are holding a strike ballot on Monday which could lead to a three-day walkout in March. Unite ambulance workers are also set to strike on January 23 as their pay dispute continues.

But Labour is heading for a battle of its own after Shadow Health Secretary Wes Streeting announced plans for a radical reform of GP contracts and vowed to take on “vested interests” such as the British Medical Association (BMA).

Dr Kieran Sharrock, BMA England GP committee acting chair, said: “This is not about ‘vested interests’. We represent our members and also want the best for patients.”