Trump formally secured the votes he will need to claim the party’s renomination in Charlotte, North Carolina, where party members are meeting amid a coronavirus pandemic that has killed here more than 176,000 Americans, erased millions of jobs and eroded the president’s standing among voters.

The partly virtual, partly in-person extravaganza here studded with Trump family members will feature the president speaking every day, even as protesters target the convention site.

It marked a contrast with Democrats, who opted for a entirely virtual format to nominate Biden, a former vice president, and running mate Senator Kamala Harris. That change was intended to reduce the risk of the virus being spread at the political event.

“The choice in this election has never been clearer, and the stakes have never been higher,” Vice President Mike Pence told attendees at the start of the Republican convention.

Biden, 77, is leading Trump, 74, in opinion polls ahead of the Nov. 3 election. Biden and his fellow Democrats portrayed Trump as a force for darkness, chaos and incompetence, while stressing the Democrats’ diversity and values like “empathy” and “unity.”

Republicans said their convention would offer a more hopeful message, with an emphasis on “law and order,” gun rights, tax cuts and the “forgotten” men and women of America.

Republicans opted not to vote on a traditional platform document detailing their policy goals, instead saying that it supports what Trump is doing. Trump’s campaign released a series of bullet-point goals, including a promise to “create 10 million new jobs in 10 months.”

In another contrast with the Democratic event, which featured all three living former Democratic presidents, and prior nominees, the Republican event will not include speeches from that party’s past living president or candidates.

With the pandemic not yet under control, good news has been in short supply for Trump. His performance as president was sharply criticized by Biden and former President Barack Obama at the Democratic convention. 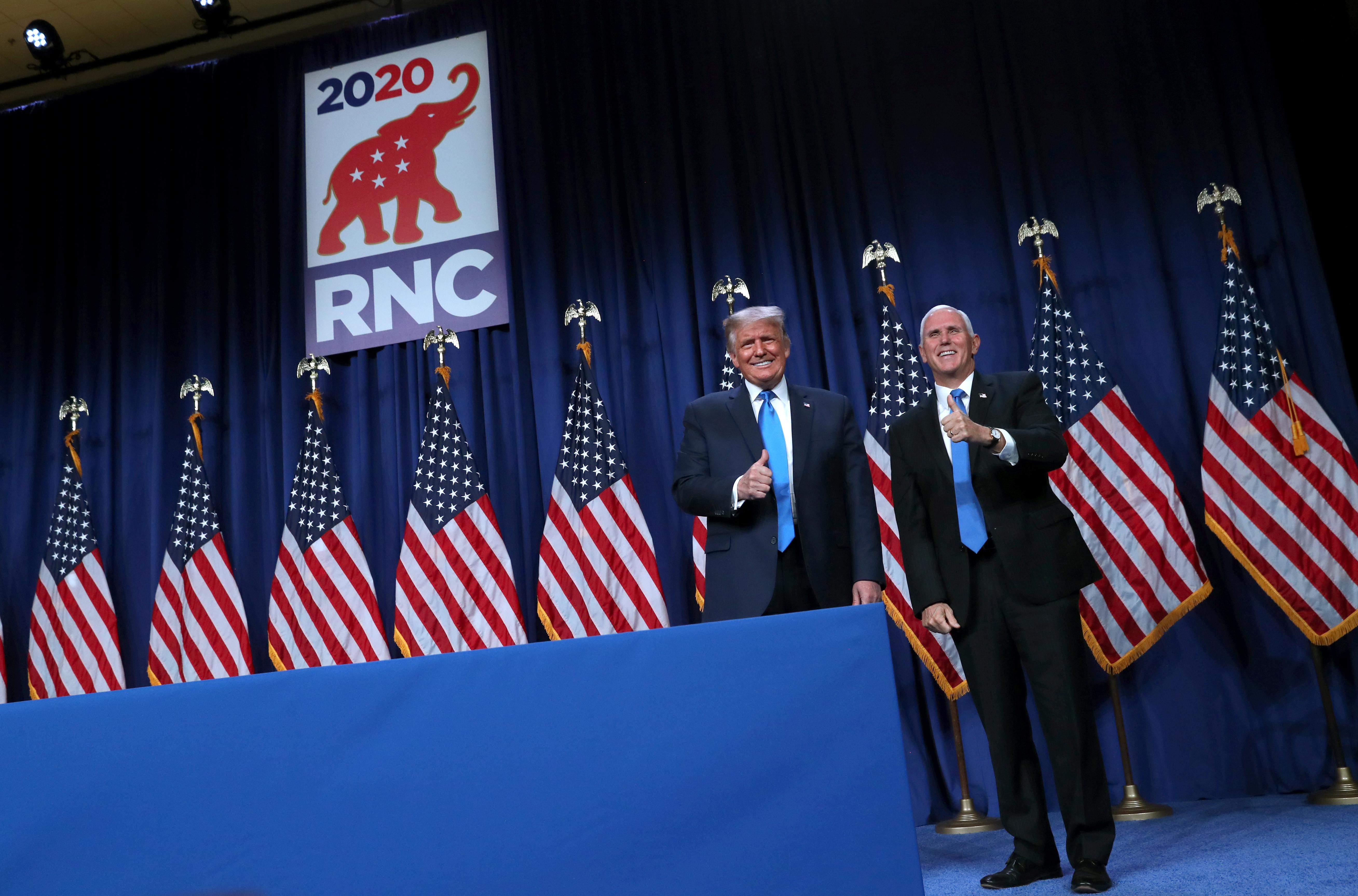 Biden’s campaign said Trump would attempt to change the subject, delivering “more desperate, wild-eyed lies and toxic division, in vain attempts to distract from his mismanagement,” according to spokesman Andrew Bates.

“What they won’t hear is what American families have urgently needed and been forced to go without for over seven consecutive months: any coherent strategy for defeating the pandemic.”

The president, a former reality television star, plans to hold several live events here with in-person audiences during the Republican convention, in contrast to Democrats, who showed pre-taped segments or delivered speeches in mostly empty venues to prevent the spread of the coronavirus.

Trump traveled on Monday to North Carolina, the venue for the scaled-back event. Trump’s planned daily speeches are a break with the tradition of the nominee keeping a low profile before an acceptance speech on the convention’s final night.

During the roll-call vote on Trump’s renomination, David Bossie, a longtime Republican operative who announced Maryland’s nomination vote, in an apparent slip-up described his state as “home of the Underground Railroad, and two of our greatest segrega-, abolitionists, Frederick Douglass and Harriet Tubman.”

Overnight, demonstrators and law enforcement clashed for a third straight night near the Charlotte Convention Center with police using pepper spray on the crowd. The Charlotte-Mecklenburg Police Department said in a statement that officers arrested five people late on Sunday.

On Tuesday, Trump’s wife, Melania, will give a speech from the White House, while Pence follows on Wednesday from Baltimore’s Fort McHenry historic site.

Trump will accept his party’s nomination on Thursday night before a crowd on the White House South Lawn. Democrats have criticized the move as a partisan use of public property.

“Trump has four days to make two cases: One is ‘we know what we are doing and have done a great job, obviously interrupted by the virus,’” said Constantin Querard, president of Grassroots Partners, an Arizona-based conservative political consultancy.

“And then you have to knock the Democratic ticket for being as far-left as they are,” he said. 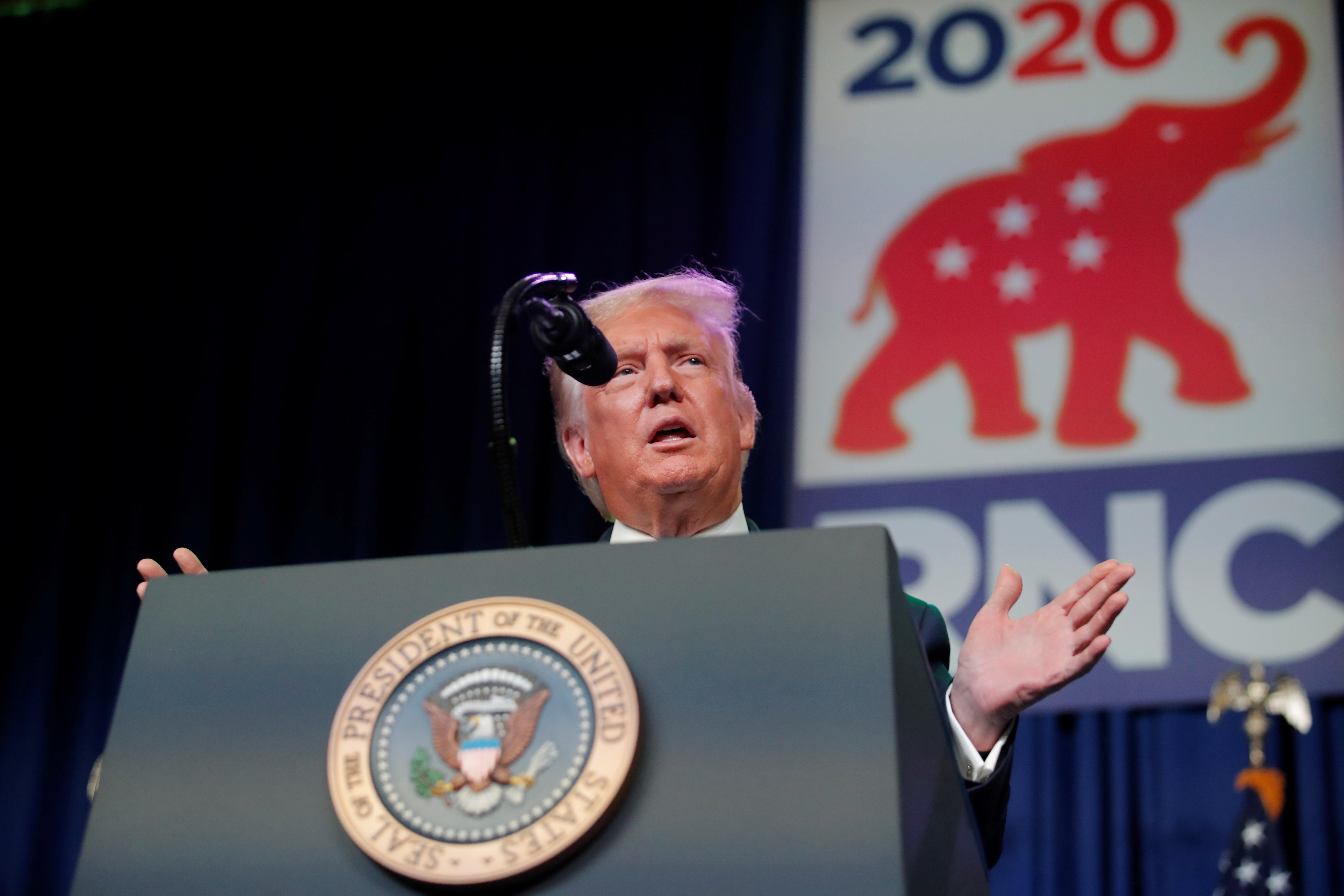 Trump, who uses pejorative nicknames to demean his opponents, previewed his attacks on Biden, whom he frequently derides as “Sleepy Joe,” in a rebuttal address after the Democratic convention finished last week.

Peter Trubowitz, a professor at the U.S. center of the London School of Economics, said he expected Republicans to launch “a full-throated attack on Biden’s fitness to be president” throughout the convention.

“It will be less about his age … and more about questioning his ‘independence’ from Democratic constituencies that the Trump campaign is defining as ‘radical,’ ‘socialist,’ and a threat to law and order,’” he wrote.