WASHINGTON — Republicans are struggling to persuade voters to oppose President Biden’s $1.9 trillion economic rescue plan, which enjoys strong, bipartisan support nationwide even as it is moving through Congress with just Democratic backing.

Democrats who control the House are preparing to approve the package by the end of next week, with the Senate aiming to soon follow with its own party-line vote before unemployment benefits are set to lapse in mid-March. On Friday, the House Budget Committee unveiled the nearly 600-page text for the proposal, which includes billions of dollars for unemployment benefits, small businesses and stimulus checks.

Republican leaders, searching for a way to derail the proposal, on Friday led a final attempt to tarnish the package, labeling it a “payoff to progressives.” The bill, they said, spends too much and includes a liberal wish list of programs like aid to state and local governments — which they call a “blue state bailout,” though many states facing shortfalls are controlled by Republicans — and increased benefits for the unemployed, which they argued would discourage people from looking for work.

Those attacks have followed weeks of varying Republican objections to the package, including warnings that it would do little to help the economy recover and grow, that it would add to the federal budget deficit and possibly unleash faster inflation, and that Democrats were violating Mr. Biden’s calls for “unity” by proceeding without bipartisan consensus.

The arguments have so far failed to connect, in part because many of its core provisions poll strongly — even with Republicans.

More than 7 in 10 Americans now back Mr. Biden’s aid package, according to new polling from the online research firm SurveyMonkey for The New York Times. That includes support from three-quarters of independent voters, 2 in 5 Republicans and nearly all Democrats. The overall support for the bill is even larger than the substantial majority of voters who said in January that they favored an end-of-year economic aid bill signed into law by President Donald J. Trump.

While Mr. Biden has encouraged Republican lawmakers to get on board with his package, Democrats are moving their bill through Congress using a parliamentary process that will allow them to pass it with only Democratic votes.

“Critics say my plan is too big, that it cost $1.9 trillion dollars; that’s too much,” Mr. Biden said at an event on Friday. “Let me ask them, what would they have me cut?”

House Republican leaders on Friday urged their rank-and-file members to vote against the plan, billing it as Speaker Nancy Pelosi of California’s “Payoff to Progressives Act.” They detailed more than a dozen objections to the bill, including “a third round of stimulus checks costing more than $422 billion, which will include households that have experienced little or no financial loss during the pandemic.” Ms. Pelosi’s office issued its own rebuttal soon after, declaring “Americans need help. House Republicans don’t care.”

Republicans have also railed against the process Democrats have employed to advance the bill, citing dozens of legislative amendments that Republicans offered in various committees, which Democrats rejected. Last week, top Republican senators complained in a letter to Democratic committee leadership about plans to bypass Senate hearings on the House bill, describing it as “the outsourcing of their own committee gavels to the House.”

The Republican pushback is complicated by the pandemic’s ongoing economic pain, with millions of Americans still out of work and the recovery slowing. It is also hampered by the fact that many of the lawmakers objecting to Mr. Biden’s proposals supported similar provisions, including direct checks to individuals, when Mr. Trump was president.

“What they’ve tried to do is pick apart individual pieces of it,” Representative Richard E. Neal, Democrat of Massachusetts and the chairman of the House Ways and Means Committee, said in an interview. “But I think on an overall basis, you have to contrast that with how well this is being received across the country.”

Some Republican lawmakers and aides acknowledge the challenge they face in trying to explain to voters why they object to the package, particularly after reaching agreement with Democrats on several rounds of aid earlier in the crisis. Many of those negotiations were contentious and stretched for months; Mr. Biden has said he will not wait for Republicans to join his effort, citing the urgency of the economy’s needs.

“We’ve shown over five different bills we can do it together,” said Senator Shelley Moore Capito, Republican of West Virginia and one of the lawmakers who had met privately with Mr. Biden to discuss both economic relief and infrastructure plans. “I think we’re going to have to draw a contrast of what’s in there and does not make sense.”

While explaining their opposition to voters would be a challenge, she said, supporting the bill is not an option for most Republicans.

“The price tag in the end is just so inordinately high and has too many extraneous things in it to gain any real support in the Republican Party.”

The scattershot critique is a contrast from the last time a president used the parliamentary move, called budget reconciliation, to push a major proposal: the $1.5 trillion tax cut package that Mr. Trump and congressional Republicans passed in 2017 without any Democratic votes. Shortly before the first House hearing on the tax cuts, Democrats on the Ways and Means Committee made a plan to brand the bill as a “tax scam” benefiting the rich and the powerful, before Republicans could sell it as a boon to the middle class. 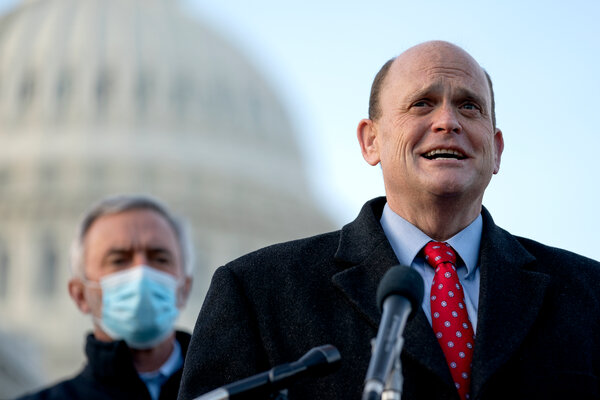 Mr. Trump’s tax cuts took a hit in public polling, and they gave little boost to Republican candidates in the 2018 midterm elections that followed. Republicans have found similar success in recent years driving the popularity of signature legislation under Democratic presidents, most notably President Barack Obama’s Affordable Care Act in 2010.

Representative Donald S. Beyer Jr., Democrat of Virginia, recalled the warning he heard from leaders in his party in 2017: “Republicans are great at talking in headlines, and we’re great at talking in fine print.” Democrats’ ability to pick a pithy message and stick with it in the tax debate, he said, was “one of the few times we ran against type.”

Many Republicans remain confident that their attacks will begin to resonate in this debate. One senior Republican aide, speaking on condition of anonymity, said that with attention focused on the legislation this week, members would continue to highlight provisions that are seen as longtime liberal priorities, as well as the money left over from previous relief packages. Republicans also plan to question whether the new funds would deliver on promises to improve the economy and reopen schools.

“I think we do have an obligation to ask questions,” said Representative Tom Reed of New York, one of the moderate Republicans who initially spoke with White House officials in a bid to reach a compromise. He predicted that once voters focused on individual provisions that demonstrated the package’s largess and overreach, they would sour on the overall proposal.

“It’s human nature, and I get it, but can we try to move forward in a much more productive manner?” Mr. Reed added, echoing the process complaints already percolating among Republicans in both chambers.

Polls suggest that could be a tough fight for Republicans, as many of the bill’s provisions are widely popular. In the SurveyMonkey poll, 4 in 5 respondents said it was important for the relief bill to include $1,400 direct checks, including nearly 7 in 10 Republicans. A similarly large group of respondents said it was important to include aid to state and local governments and money for vaccine deployment.

They split evenly on the question of whether they are more concerned that the plan is too big, further driving up the federal budget deficit, or too small, and thus unable to quickly spur economic growth.

The fractured debate over the plan in and outside of Washington has also been largely overshadowed by the tumult within the Republican Party itself, where the specter of Mr. Trump and his impeachment over the Jan. 6 Capitol attack looms large and threatens to continue upending efforts to focus on conservative efforts to frame the legislation as overreaching and ineffective. (Mr. Trump, as recently as this week, was hammering Republicans for an unwillingness to accept direct payments.)

Given their slim majority in the House and the strict parameters that allow them to avoid the filibuster in the Senate, Democrats can afford few, if any, defections in order to send the legislation to Mr. Biden’s desk before unemployment benefits begin to lapse in March.