Liz Truss has been dealt another huge blow after leading pollster Sir John Curtice warned she is now “as unpopular as Boris Johnson was when he was brought down”. The Prime Minister has already faced a massive backlash from all quarters – including from within the Conservative Party – following plans announced in the Chancellor’s mini-budget to cut billions of pounds in taxes. Kwasi Kwarteng said he would scrap the top rate of income tax for the highest earners, but the Government was this morning forced into a massive U-turn on this.

Following the mini-budget, UK financial markets were left trembling after the pound sunk to its lowest ever level against the US dollar, while a damming poll from YouGov showed the Tories are a massive 33 percent behind Labour.

Now leading pollster Sir John Curtice has warned that despite being less than a month into the top job, Ms Truss’ popularity has plunged to depths not even seen with her predecessor Mr Johnson.

“Prof Sir John Curtice told a @demos thinktank last night: ‘Liz Truss is now as unpopular as Boris Johnson was when he was brought down.'” 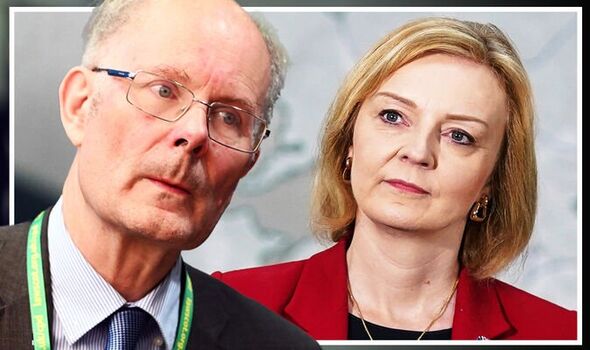 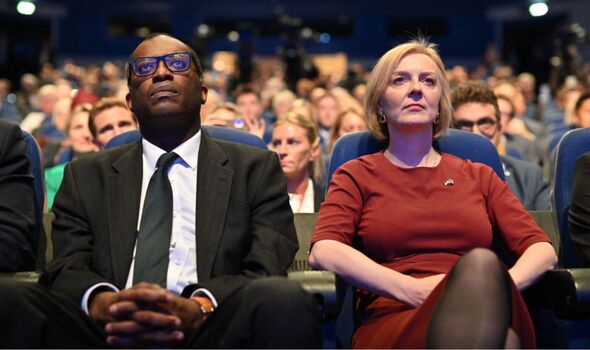 The latest blow for Ms Truss comes with leading Tories already turning against her, already demanding a general election take place after blasting ‘widespread dismay’ at hands of the Prime Minister.

Nadine Dorries took to Twitter to lash out after Ms Truss performed an embarrassing U-turn on scrapping the 45p top rate of income tax.

The former Culture Secretary, who served under Mr Johnson, was furious the Prime Minister has shelved plans to reform the BBC licence, sell Channel 4 and bring in the online safety bill.

She wrote: “Widespread dismay at the fact that 3 years of work has effectively been put on hold. No one asked for this. 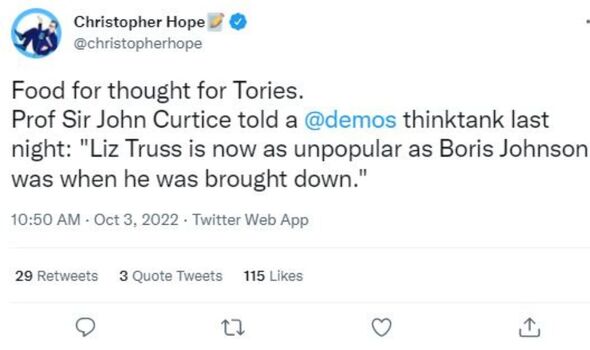 “C4 sale, online safety, BBC licence fee review – all signed off by cabinet all ready to go, all stopped. If Liz wants a whole new mandate, she must take to the country.”

Meanwhile, Michael Gove continued his attack against Ms Truss as he threatened to launch a fresh rebellion against the Prime Minister.

The former Cabinet minister warned the Government must not switch from its pledge to increase benefits in line with inflation.

Boris Johnson had made the commitment when he was Prime Minister, but his replacement of four weeks has so far refused to clarify if she will do the same. 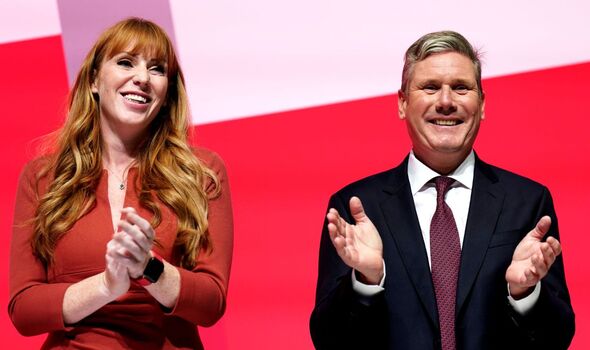 Mr Gove said today: “My basic position, my starting position is, yes, Boris was right. I’d need a lot of persuading to move away from that.

“But I wouldn’t want to prejudge an argument that was put in front of me before the argument was made.

“Because in crises, you sometimes have to do things and embrace policies that would in other circumstances be deeply unattractive.”

Launching his latest attack on the Government today, Mr Gove warned there would be “more turbulence to come” for Ms Truss.

The latest criticisms come days after a damning new poll from last week showed the Tories have fallen a massive 33 points behind Labour.

The latest YouGov/Times vote intention poll of 1,712 UK adults from September 28-29 showed Labour on 54 percent of the vote, up nine points on their previous record high with YouGov on the previous Monday.

But in a bitter blow to the under pressure Ms Truss, the Conservatives dropped to 21 percent of current vote intention, down seven points.

As well as being their record highest share ever in a YouGov poll, Labour’s 33-point lead is the highest figure the party has ever recorded in any published poll since the late 1990s.