The first small cracks have begun to appear in the Republican wall of support for President Trump and his unfounded claims of voter fraud in the 2020 election, with a growing number of elected officials and party leaders signaling on Thursday that they would indulge Mr. Trump’s conspiracy theories for only so long. A few were willing to openly contradict him.

Gov. Mike DeWine of Ohio said that it was time to call Joseph R. Biden Jr. the “president-elect.” The Republican attorney general of Arizona said that Mr. Trump would not end up winning his state, despite the president’s protestations. And on Capitol Hill, several Republican senators have begun, in measured tones, to say that Mr. Biden should be entitled to classified intelligence briefings as the incoming commander in chief or that it is time to recognize he will soon be certified as president-elect.

Asked when he believed Mr. Trump should accept the result, Senator Charles E. Grassley of Iowa, the chairman of the Senate Finance Committee, even set a deadline for the president to acknowledge reality: Dec. 13 — the day before the Electoral College delegations cast their votes for president.

Influential party financiers and strategists have begun to weigh in, as well.

“The president does a disservice to his more rabid supporters by insisting that he would have won the Nov. 3 election absent voter fraud,” said an editorial in The Las Vegas Review-Journal, a newspaper owned by the family of the Republican megadonor Sheldon Adelson. “That’s simply false.” Mr. Adelson and his wife, Miriam, have given more than $75 million to super PACs supporting Mr. Trump.

Mr. Trump has a long memory, a penchant for seeking revenge on those who cross him and overwhelming support among the base of Republican voters. The fact that so few prominent Republicans are willing to break publicly with him, even in defeat, is the latest sign of his enduring hold on the Republican Party — now and into the future.

“When you look at the number of votes that he got, you look at the kind of enthusiasm that he engenders, I mean — he’s going to be a very, very significant figure whether he’s in the White House or not,” said Senator Josh Hawley, Republican of Missouri. “I don’t know who else would be considered the leader, if not for him.”

No prominent potential Republican candidate for president in 2024 — including Mr. Hawley — has criticized Mr. Trump for his refusal to acquiesce to the transition of power. Most have stayed silent or given Mr. Trump, who has spoken privately about running again in four years, latitude and support without parroting his most baseless conspiracies. Vice President Mike Pence, who followed Mr. Trump to the lectern on election night, tried to sound as if he was standing firmly with the president without echoing his false claims of victory.

But with Mr. Biden now leading in enough states to deliver him as many as 306 Electoral College votes — the same sum Mr. Trump won in 2016 and declared a “landslide” — and with no credible evidence of electoral malfeasance, Republicans are gingerly beginning to acknowledge the reality of Mr. Biden’s win. The former vice president leads by more than 20,000 votes in Wisconsin, 53,000 in Pennsylvania and 148,000 in Michigan — comparable to or larger than Mr. Trump’s winning margins in those states four years ago.

“There is an inevitable logic to this,” said Ari Fleischer, the White House press secretary under President George W. Bush, who has congratulated Mr. Biden on his win on Fox News. “None of these recounts and allegations are going to turn this election around.”

Former President Obama called it a “dangerous path” in an interview with CBS’s “60 Minutes,” according to excerpts released Thursday. He said he was troubled that “Republican officials who clearly know better are going along with this.”

On Thursday, the president made new baseless accusations about a voting software company. Groups representing government election and security officials, including in the Trump administration, as well as private sector election vendors, issued a joint statement declaring, “There is no evidence that any voting system deleted or lost votes, changed votes, or was in any way compromised.” 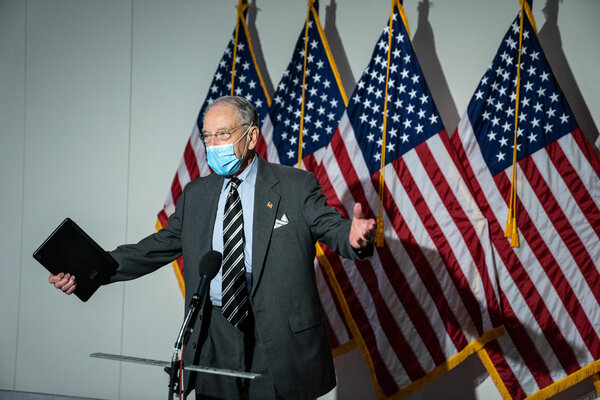 Mr. Trump’s strategy is a familiar one that he has deployed since the first full day of his administration. Then, he demanded that his press secretary, Sean Spicer, march out to the White House Briefing Room to declare his inauguration crowd was the largest in history, despite clear evidence to the contrary. Now, he wants Republicans to ignore the election results to declare him the 2020 winner anyway.

When Secretary of State Mike Pompeo predicted earlier this week, with a grin, that there would be “a smooth transition to a second Trump administration,” Mr. Trump favorably reposted the video on Twitter.

The political and rhetorical safe space that many Republicans have retreated to is a call to “count every legal vote,” insinuating there was a raft of illegal ballots that no evidence has shown exist. (There are also more extreme Democratic fears of G.O.P. state legislatures appointing rogue electors who might ignore the results in their states, but Mr. Biden’s campaign has been dismissive of such talk.)

For now, Senate Republicans are especially leery of crossing Mr. Trump before the two Georgia runoffs on Jan. 5 that will determine control of the chamber, realizing they must mobilize Mr. Trump’s base without him on the ballot. There are fears that Mr. Trump might attack either Senator Kelly Loeffler or Senator David Perduefor being insufficiently loyal.

Both senators signed an unusual joint statement calling for the resignation of the Republican secretary of state in Georgi, a move widely interpreted as currying Mr. Trump’s favor.

“It’s pretty clear that the president doesn’t give a damn about the Senate majority or those two senators, so they know it would not be anything to turn on them and crush turnout,” said Brendan Buck, who served as a top adviser to the last two Republican House speakers, Paul D. Ryan and John A. Boehner. “We’ve always been talking about how the president has taken over the party. But here is an example where is he holding base G.O.P. voters hostage to force Republicans to participate in his charade.”

Senator Chris Murphy, Democrat of Connecticut, said Republican fealty to Mr. Trump revealed that the party was “now a full-on cult of personality.”

“I think they understand that Trump will continue to dominate their politics for the next decade and they’ve all made a decision that they can’t survive personally if they get crosswise with him,” he said. “That’s a devastating development for our country.”

Mr. Murphy said undermining the legitimacy of Mr. Biden’s win had real-world consequences. “If there is a lingering belief among 40 percent of the country that Joe Biden’s election was fraudulent, it does make it very hard to do even the nonpartisan things, like distribute a vaccine,” he said.

The Trump campaign continues to bombard supporters with urgent requests for cash for his “election defense fund,” but the fine print of those appeals shows that the president is actually looking ahead to his own future, collecting cash primarily for a new political action committee, not an account devoted to legal and recount expenses. The first 60 percent of every donation goes to Mr. Trump’s new PAC, Save America, and 40 percent goes to the Republican National Committee.

Only after the PAC gets $5,000 from an individual would any money wind up in the Trump recount fund.

Bob Bauer, a top lawyer for Mr. Biden, has dismissed Mr. Trump’s legal filings and tweets as “theater.” As Mr. Trump continues to whip up fears of a stolen election, even some aides and allies privately acknowledge that Mr. Trump has lost.

The reality is that Mr. Trump is not just the president but also a major publisher and distributor. In the week after the election, his postings dominated Facebook, accounting for the 10 most engaged status updates in the United States, and 22 of the top 25. “I WON THIS ELECTION, BY A LOT!” was his top post.

Mr. Trump also posted the most engaged link on Facebook that week, a solicitation for cash to fight the election results.

Inside the Republican Party, the president remains a singular influence. He effectively anointed Ronna McDaniel for another term as chair of the Republican National Committee with a tweet this week.

“It is possible the true winner will never be known,” said Rob Steele, an R.N.C. member from Michigan, where some Republican lawmakers are demanding a “thorough audit” of the election.

Most were happy to hold off recognizing Mr. Biden as the president-elect until Dec. 14 — if then.

Related posts:
Recent Posts
Latest Posts
COVID-19 Could Tip Topshop’s Troubled Parent into Bankruptcy
BBC Weather: 10cm of snow threatens to freeze Europe as temperatures plummet to -2C
America’s Cup whistleblowers Tom Mayo and Grant Calder say they feared for their safety after Grant Dalton branded them ‘spies’
Teen, 19, gunned down in drive-by shooting hit by rival gang members on street
3 Brilliant Ways to Transform Leftover Stuffing
This website uses cookies to improve your user experience and to provide you with advertisements that are relevant to your interests. By continuing to browse the site you are agreeing to our use of cookies.Ok