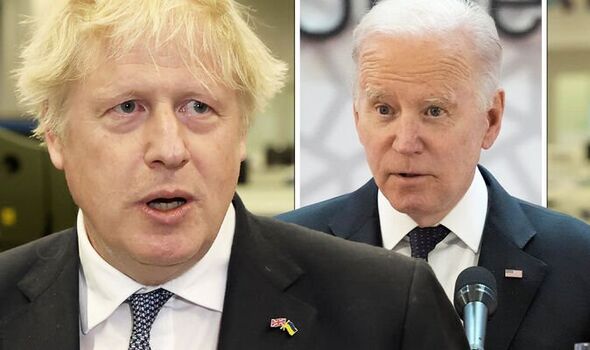 In its latest warning, the Government says that Northern Ireland will not be able to reap the full benefits of “freeports” – areas near shipping ports or airports where manufacturers can import goods tariff-free – that are on offer in England, Scotland and Wales unless changes are made.

The Government is doubling-down on warnings that EU rules mean Northern Ireland is “losing out” and that arrangements originally intended to avoid the need for border checks on the island of Ireland are hurting people and businesses.

This comes as the US has warned against Britain acting alone, saying the row with the EU could undermine unity in opposition to Russia’s invasion of Ukraine.

Last week Nancy Pelosi, the Speaker of the US House of Representatives, accused the Britain of wanting to “unilaterally discard” the Northern Ireland Protocol and said Congress would not support a trade deal with the UK if it undermined the peace process.

But a UK Government source said: “The protocol has created an unacceptable two-tier system in the UK, where people and businesses in Northern Ireland are losing out in comparison to the rest of the UK.

“That is why we need to fix the protocol – so that it works for the people of Northern Ireland, whilst also protecting the EU’s single market. Our proposals would do that.

“But unless we can have genuine negotiations, which can fix these issues, we have to act to stabilise the situation in NI and bring parity with the rest of the UK.”

Exclusive polling by Techne found that 75 percent of people said President Joe Biden should “stop interfering in the UK/EU talks” on the future of the protocol.

Foreign Secretary Liz Truss sought to explain Britain’s position today when she met with a bipartisan delegation from the US Congress, led by powerful Democrat Richard Neal.

The controversy has plunged Northern Ireland’s democracy into crisis, with the Democratic Unionist Party (DUP) refusing to share power with Sinn Fein unless major changes are made.

Under the protocol, EU state aid rules continue to apply to Northern Ireland in areas such as taxation and spending. This means the zero-rate on VAT on the installation of energy saving materials does not apply in Northern Ireland.

The Government claims that a family in Northern Ireland paying £6,000 for a solar panel installation could only save up to £857 in VAT relief – compared to £1,143 for a family in the rest of the UK.

Sarah Elliott, a spokeswoman for Republicans Overseas UK, said Britain should continue to pursue a solution to the problems with the protocol.

She said: “The UK should continue to find ways to implement Brexit, the democratic will of the people, so that it works for all citizens of the UK. And the US needs to be balanced and pragmatic on this.

“If the UK puts forward a reasonable idea, they should get behind it, and not take sides allowing their own political opinions on Brexit to interfere.”

Victoria Hewson of the Institute of Economic Affairs played down the chances of a trade war with the EU if the UK acts unilaterally, saying that “if no UK goods are being smuggled over the Irish border, a trade war would not be proportionate.”

She added: “The EU is also facing cost of living and security challenges, so it seems unlikely that member states would wish to embark on measures that would cause further disruption to their economies and to the strategic partnership with the UK.”

But Matthew O’Toole, an SDLP member of the Stormont Assembly said: “Time and time again the EU has shown itself willing to compromise for the greater good and nothing will be achieved by Boris Johnson and Liz Truss trying to appease the DUP and the extreme elements of their own party.

“The British government’s proposal to unilaterally disregard parts of the Protocol abandons the principle of partnership when it comes to sensitive issues in the North and this government doesn’t appear to care about the consequences of their actions, which have already contributed to a decline in community relations.”

However, former Brexit minister David Jones said: “The whole point of the Good Friday Agreement is to preserve community rights and ensure there are no constitutional changes without the consent of the people. In fact, what has happened is precisely that – and that is why we’ve got the unrest in Northern Ireland…

“Frankly, we can’t allow part of our country to have the problems that its had as a consequence of the protocol.”

Polling of adults in Great Britain by Redfield & Wilton Strategies found that the union mattered “a great deal” to 18 percent, “quite a lot” to 24 percent, “some” to 28 percent and “not at all” to 30 percent.