US special envoy for climate, John Kerry, praised the UK for the “important work” being done in tackling the green agenda. Joe Biden has made climate change one of the priorities of the White House, with the UK eager to use the issue to help forge its new role on the world stage outside the EU.

Mr Kerry has been in London to hold talks with Prime Minister Boris Johnson and key ministers on the approach to climate.

He met with Chancellor Rishi Sunak, Foreign Secretary Dominic Raab and Cop26 president Alok Sharma during his short visit to the UK.

Britain is hosting the major United Nations Cop26 summit in Glasgow on climate change in November, with the event seen as the most important international summit on the issue in over half a decade.

Mr Kerry praised the UK’s leadership on the summit, writing on social media: “Leaving the UK today with renewed hope for the climate agenda at CopP26 in November. 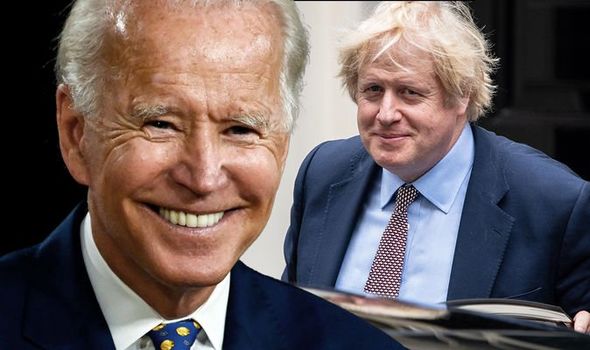 “So much important work being done here by ministers, business, and civil society alike.

“Glad to have such strong allies in facing down the climate crisis.”

In an interview with BBC Newsnight yesterday he added UK and US relations were booming.

He said: “I can tell you assuringly I can’t think of a moment when we haven’t been more aligned than we are now in every respect.”

Mr Kerry added: “We are strongly, strongly linked together with unbreakable bonds.

“I’ve great respect for that relationship.” 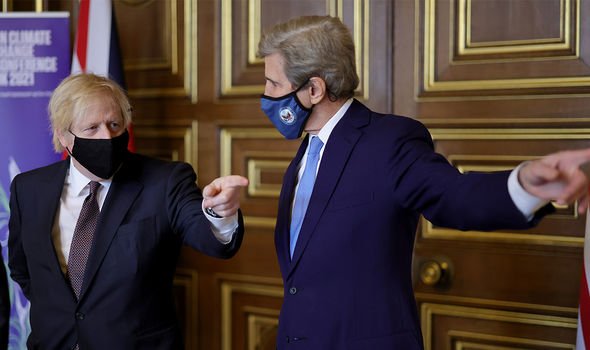 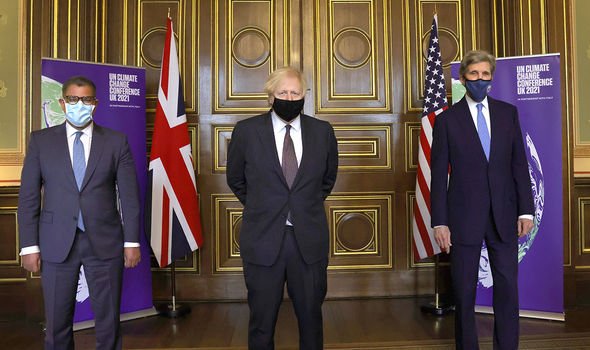 The comments are a huge boost for Mr Johnson, who is hoping to woo Mr Biden into agreeing a new free trade deal between the two countries.

The President has been vocal that he was not a supporter of Brexit and there were fears his election could undermine efforts to agree a deal with America.

However, a further sign of progress in the trade relationship between London and Washington, last week the US announced it was suspending tariffs on Scotch whiskey and other British goods.

A 25 percent tax on all Scotch whisky exports to America was imposed during an escalating trade dispute between the US and EU while Britain was still a member.

The US has suspended the levies for four months while negotiations between the UK and US on a long-term solution take place.

Announcing tariffs were being suspended, a joint statement said: “The United Kingdom and the United States are undertaking a four-month tariff suspension to ease the burden on industry and take a bold, joint step towards resolving the longest-running disputes at the World Trade Organization.

“This will allow time to focus on negotiating a balanced settlement to the disputes, and begin seriously addressing the challenges posed by new entrants to the civil aviation market from non-market economies, such as China.”

International Trade Secretary Liz Truss said she was “delighted” by the US’s decision.