Nicola Sturgeon told Scottish Parliament that an issue with the distribution of appointment letters partly led to the staggering amount of appointments missed. The SNP leader issued an apology to those affected by the issue and stated she has been given assurances that it has been resolved.

Ms Sturgeon said: “When we implement a programme of this scale and at this speed, it is inevitable that there will be glitches and things that do not go as well as we want.

“That is true of the scheduling, printing and posting of letters associated with the programme.

“We are aware of issues with the delivery of appointment letters in the early part of last week.

“We are still trying with NHS Scotland and Royal Mail to understand all of the detail of that but I have been given an assurance that the issue has been resolved. 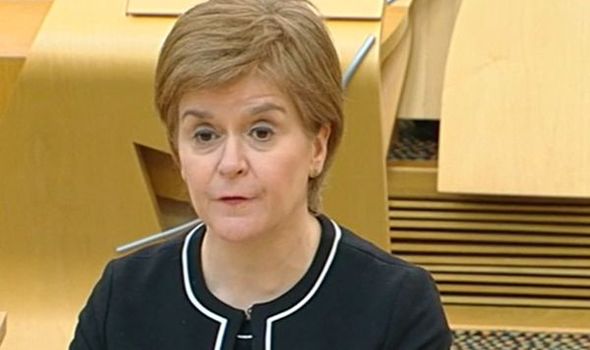 “I want to apologise to anybody affected, there were around 60,000 appointments last week that were not attended.”

She added: “Undoubtedly last week that would have been partly down to the issue with letters but there will also be other issues.

“For example, we were concerned last week, those concerns have not materialised, about the publicity around the AstraZeneca vaccine and the impact that might have.”

Last week, Scotland’s First Minister snubbed the warning from several European Union countries regarding the AstraZeneca vaccine and pledged her full support behind the Oxford jab.

Sturgeon: SNP MP says ‘there will be consequences’

Ms Sturgeon told Scotland’s coronavirus press briefing that she was eager to take any coronavirus vaccine she is offered, including the AstraZeneca jab.

Scotland’s First Minister added that getting vaccinated will provide significant protection and is really important.

Ms Sturgeon said: “I personally am in the age group that will be vaccinated before mid-April, so I am hoping to see my blue envelope appear over the next couple of weeks.

“As soon as I get that invitation to go to be vaccinated, I will be there without hesitation regardless of which of the vaccines I am being offered.

“I would urge everybody who is getting the invitation to be vaccinated to come and get the vaccine because it will provide you and people you love with significant protection and that is really important.”

A host of European countries including Germany, France and the Netherlands suspended the AstraZeneca vaccine last week over fears of the jab causing blood clots.

However, later in the week it was confirmed there was no link between the Oxford vaccine and blood clots.

The UK has continued rolling out the AstraZeneca vaccine and recently surpassed 30 million vaccines administered.