LOS ANGELES (Reuters) – A resurgent Joe Biden rolled to victories across the South, Midwest and New England on the biggest day of voting in the U.S. Democratic presidential nomination campaign, setting up a one-on-one battle against Bernie Sanders, who led in California.

Biden, the former vice president whose campaign was on life support just weeks ago, won nine of 14 states voting on “Super Tuesday”, including surprise wins in Texas and Massachusetts, in the race to face President Donald Trump in November.

Just days after his campaign was resurrected by a thumping win in South Carolina, Biden, 77, emerged as a consensus champion for the moderate wing of the party against Sanders, 78, a left-wing senator with strong support among the youth.

“For those who have been knocked down, counted out, left behind, this is your campaign,” Biden told roaring supporters in Los Angeles. “We are very much alive!”

In what would be the day’s biggest upset, Biden was projected by Edison Research to have won Texas, the biggest prize after California. Sanders invested heavily in Texas and was counting on its Latino population to propel him to victory.

Sanders, the one-time front-runner who had hoped to take a big step toward the nomination on Tuesday, won Colorado, Utah and his home state of Vermont, Edison Research said.

Fox News and AP projected Sanders won California, whose 415 delegates represent the largest haul. Edison Research and other networks held off declaring a winner there as results trickled in. Maine was a toss-up, with both Biden and Sanders winning roughly a third of the vote with 73% of the precincts reporting.

Without naming him, Sanders took direct aim at Biden during a rally with supporters in Vermont, criticizing his 2002 vote to authorize war in Iraq and his support for global trade deals that Sanders opposed.

“We’re going to win the Democratic nomination and we are going to defeat the most dangerous president in the history of this country,” Sanders said, referring to Trump.

It was a spectacular turn for Biden after poor showings in the first two contests, Iowa and New Hampshire. Until a week ago he trailed Sanders in most state and national opinion polls.

But Biden’s blowout win in South Carolina on Saturday provided a burst of new momentum, fueling a wave of endorsements from Democratic officials. Two big rivals – Pete Buttigieg, a former mayor of South Bend, Indiana, and U.S. Senator Amy Klobuchar of Minnesota – quit the race and backed him.

The results left Michael Bloomberg, the billionaire former New York mayor who plunged into the contest late, with virtually nothing to show for more than half a billion dollars spent on advertising. With his only victory coming in the tiny U.S. territory of American Samoa, aides said he would reassess whether to stay in the race on Wednesday.

It was also a tough night for Senator Elizabeth Warren, who finished well behind Sanders and Biden in most states and trailed them in her home state Massachusetts, which Biden won despite having spent no money and deployed no staff there.

Biden did not personally campaign in several of the states he ultimately won, including Klobuchar’s home state Minnesota. He called Klobuchar Tuesday night to thank her for the Minnesota win, a day after she dropped her own bid and endorsed him. 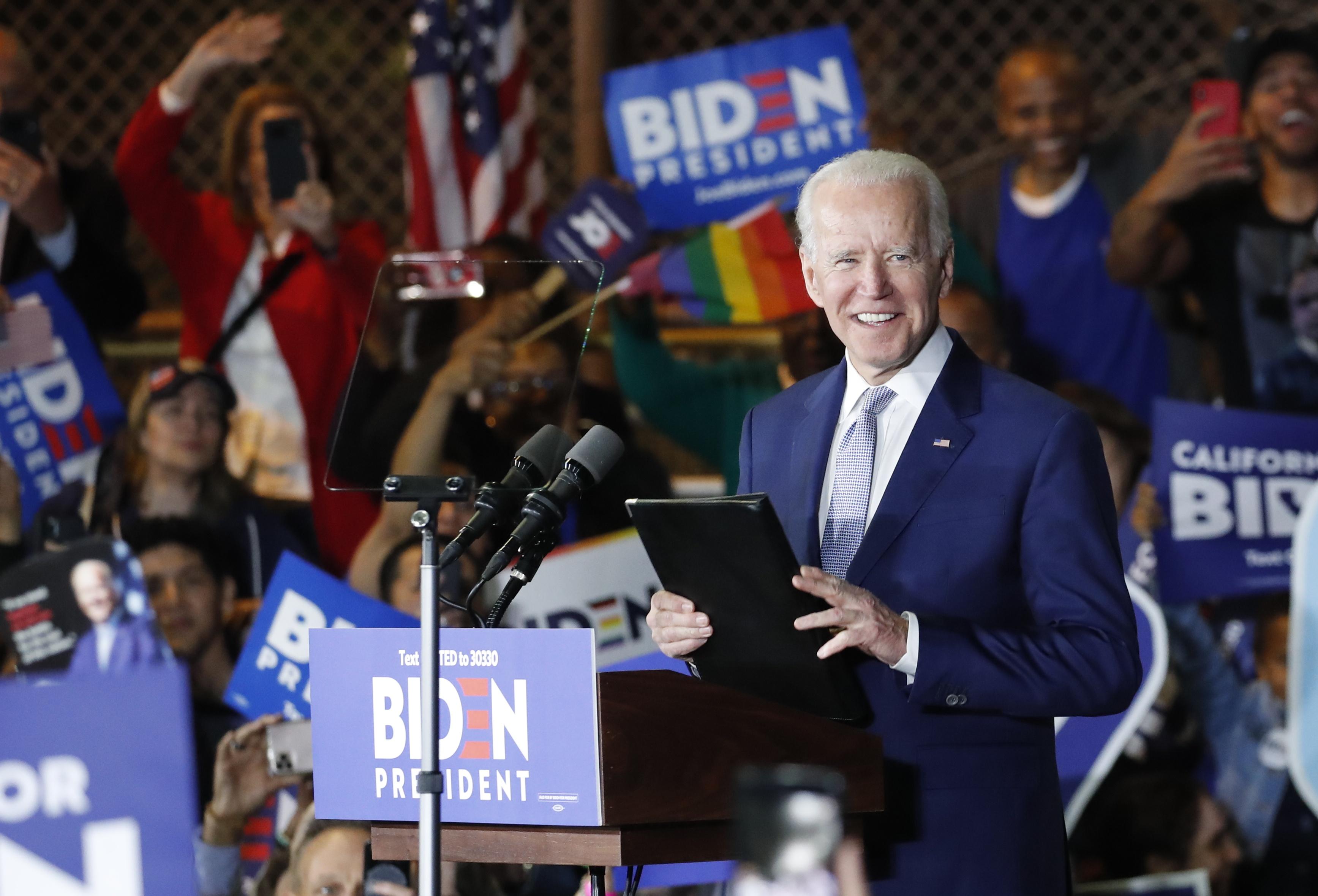 ONE-THIRD UP FOR GRABS

More than one-third of the delegates who will pick the eventual nominee at a July convention were up for grabs on Tuesday, providing clarity at last in a muddled race for the White House.

Just a week ago, Biden was hoping to stay within reach of Sanders, to keep alive a chance to catch up as the race moved on. But initial tallies showed him leading Sanders in delegates for the day 332 to 265, with hundreds more to be allocated.

To date, Biden leads Sanders in delegates 385 to 325. A candidate needs 1,991 delegates to win the Democratic nomination on the first ballot at the party’s convention in July.

The campaign continues at an accelerated pace through the next two weeks, when nearly another 1,000 delegates are up for grabs, including the swing state of Florida on March 17.BRIDGE

Bloomberg bombarded Super Tuesday states with ads to jump into position as a top moderate rival to Sanders, but saw his poll numbers slide after coming under fire during debates. He was on course to win 15% or more of the vote, the threshold to win delegates, in Tennessee, Texas, Colorado, Utah, California and Arkansas.

Biden is hoping to build a bridge between progressive Democrats’ desire for big structural change and more moderate Democrats’ yearning for a candidate who will be able to win over enough independents and Republicans to oust Trump.

In Texas, which Biden unexpectedly won with 33% of the vote compared to Sanders’ 30%, 56% of voters said they favored a candidate who could beat Trump over someone they agreed with on major issues. Among those voters, nearly 40% chose Biden, over Sanders who had 26%, according to Edison Research exit polls. 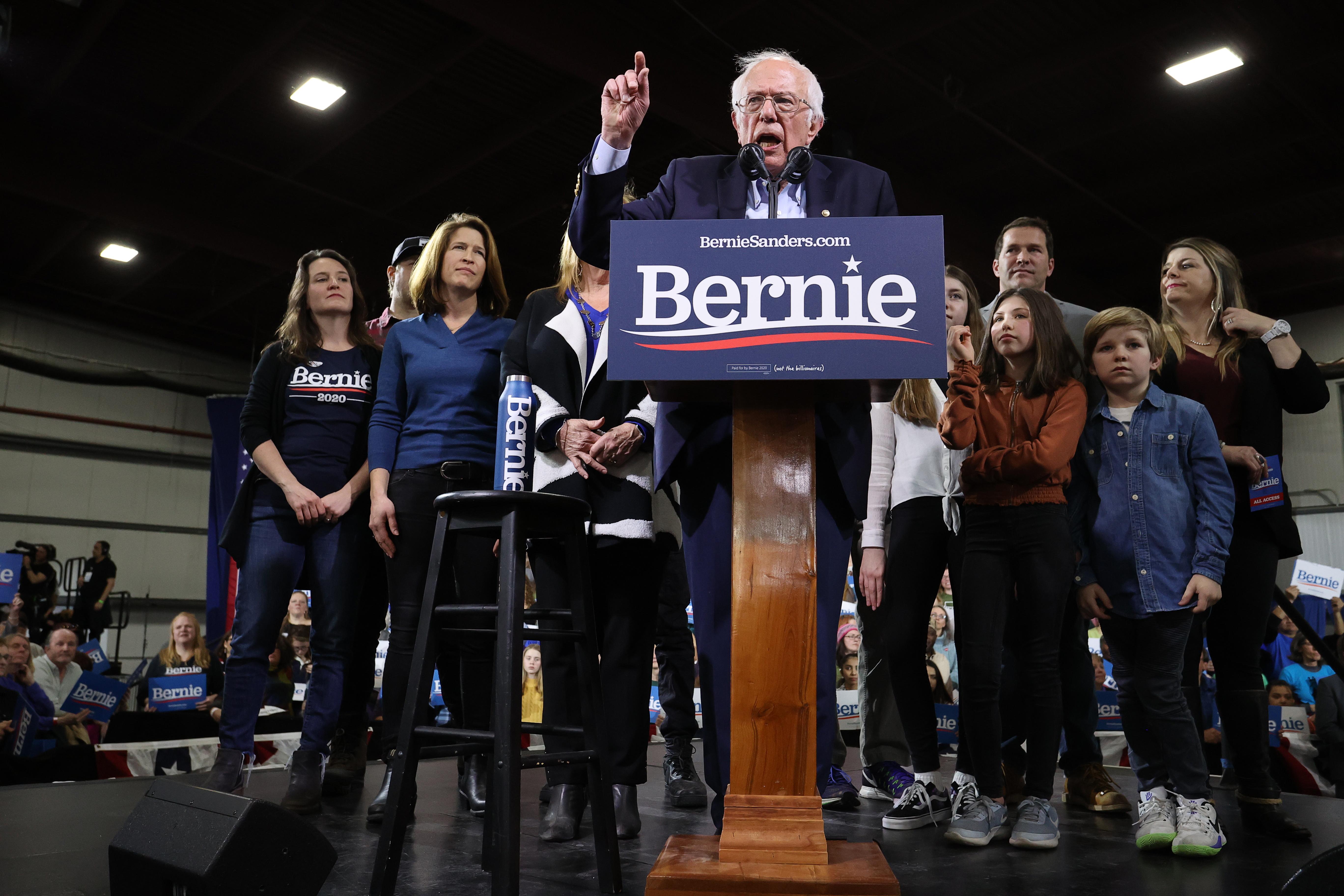 Biden pulled off his victories despite being vastly outspent by Bloomberg, who had spent $377 million on ads by Feb. 23, and Sanders, who spent $20 million. Biden spent $4.7 million during the same period, according to the Wesleyan Media Project.

The pace of the Democratic race begins to accelerate after Super Tuesday, with 11 more states voting by the end of March, when nearly two-thirds of the delegates will have been allotted.

The next contests, on March 10, will be in Idaho, Michigan, Mississippi, Missouri, North Dakota and Washington state.