WASHINGTON — When President Biden and his top advisers decided to bomb Iran-backed militias in Syria last week, Susan E. Rice was not in the room.

Ms. Rice, who was national security adviser in the Obama administration and now runs the Domestic Policy Council for Mr. Biden, still has her security clearances. She could read the classified intelligence reports if she wanted to, but she admits she no longer has any need to know beyond her own gnawing curiosity.

She acknowledges a sense of relief that she does not have to tackle the same national security problems she left behind four years ago, and that instead of Syria and Saudi Arabia, she is focused on an array of issues like health care, immigration and gun safety as well as instilling racial equity throughout the government.

That relief, however, is coupled with some fear of missing out.

“I kind of wish I had been in the room just to hear all the considerations,” Ms. Rice said Saturday during a Zoom interview, dressed in yoga pants and a white fleece, discussing the military action in Syria. “But I’ve got more to do than I’ve got hours of the day. It’s new terrain, so it’s fun.”

On paper, the job of running the little-known Domestic Policy Council is a small role for someone who made the short list for vice president and later hoped for a top national security job.

It is still too early to judge how much clout she will have in an administration well-stocked with domestic policy experts. And it is not clear what role she might play in working through matters that will require some buy-in from Republicans on Capitol Hill, given her self-described role as “recyclable boogeyman” of the right.

But Ms. Rice, one of the few senior Black women officials in the West Wing, has been brought in with a mandate to elevate the council and to operate as part of a policy troika alongside Jake Sullivan, the national security adviser, and Brian Deese, the director of the National Economic Council.

And colleagues say Ms. Rice, well known for her sharp edges, is not shy about asserting herself.

“She has made it so that she’s always going to have a seat at the table, or she’s going to break in the door,” said Jen Psaki, the White House press secretary. “People knew that when she came in.”

This was not where she originally thought she would end up. But during the transition, when it was unclear whether Democrats would win control of the Senate, Ms. Rice’s conversations with the Biden team switched from cabinet positions, like defense secretary and secretary of state, to White House roles that would not require Senate confirmation. The inevitable relitigation by Republicans of Ms. Rice’s role in responding to the 2012 terrorist attack on the American mission in Benghazi, Libya, which left four Americans dead, was not what anyone believed would be a ticket to a speedy or successful confirmation.

By the time the Democrats gained control of the Senate in January, Ms. Rice had already been named to her current post, with backers like Representative James E. Clyburn of South Carolina, who urged Mr. Biden to name a person of color to the position.

The domestic policy job typically goes to someone who is not a household name, but is steeped in domestic policy. (Another candidate for the position was Ann O’Leary, a longtime domestic policy adviser to Hillary Clinton who most recently served as chief of staff to Gov. Gavin Newsom of California.)

It is also considered relatively lacking in visibility and prestige, operating as a distant third player behind the National Economic Council and the National Security Council.

The staff and budget of the Domestic Policy Council is a small fraction of what Ms. Rice had when she oversaw an almost 400-person National Security Council during the Obama administration. Ms. Rice currently has about 40 people reporting to her, with plans to add more by drawing on employees working in government agencies.

Gone is the morning Oval Office meeting with the president to review the daily presidential brief, her routine during her tenure as national security adviser under President Barack Obama, replaced by the promise of at least a standing weekly meeting with Mr. Biden. 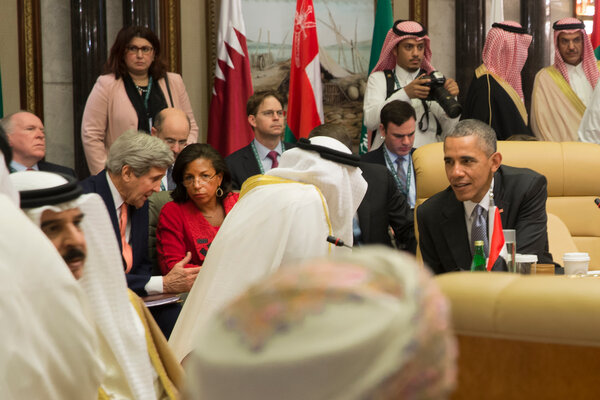 “The Domestic Policy Council has never been as robust in terms of process and interagency coordination as National Security Council and the National Economic Council have been,” said Ron Klain, the White House chief of staff.

In accepting the position, he said, Ms. Rice told him she wanted the resources to make the Domestic Policy Council more of an internal force.

“We wanted her to have an N.S.C.-like process,” Mr. Klain said. “She’s, like, ‘Well, then I need an N.S.C.-like staff and budget.’ We weren’t quite able to match the N.S.C., but we did significantly plus up the number of staff she has.”

Now, Ms. Rice occupies the West Wing office that was previously inhabited by Stephen Miller, President Donald J. Trump’s top policy adviser. Aware of the symbolism of a Black woman who has been vilified by conservatives occupying the space where Mr. Trump’s most hard-line immigration adviser used to dictate policy, Ms. Rice has decorated it with Haitian art and scented it with sage.

From there, she now convenes regular Zoom meetings about topics central to Mr. Biden’s agenda — she hinted at actions to come on voting rights, community violence and gun safety — and she has reorganized the way the council works.

Instead of having a principal deputy serving under the director, she has appointed four senior deputies who are experts in their fields.

“I’m not a health care policy expert,” she said. “The single deputy structure means everything is a bottleneck. I’ve got these high-powered deputies and that’s how we’re going to get stuff done.”

Colleagues said she has been working on how to make the Paycheck Protection Program distribute money more equitably to small-business owners than it did under the Trump administration.

On Tuesday, Ms. Rice met by Zoom with Randi Weingarten, the longtime president of the American Federation of Teachers, to discuss how to use the public education system to combat the spread of disinformation.

She wanted to talk to Ms. Rice about what she called a “lack of discernment between fact and propaganda,” and said Ms. Rice challenged her “about ‘how do we actually do this from the White House.’”

Ms. Weingarten came away impressed. “I’ve met many of the domestic policy advisers in the White House,” she said. “A lot before were really good people, but they made sure the trains ran on time. She’s a big thinker. Her job is beyond that.”

Ms. Rice’s family is rooted in domestic policy issues, even if her own career has skewed to problems abroad. Her mother, Lois Dickson Rice, a high-powered corporate executive, helped persuade Congress to provide federal subsidies, known as Pell grants, to needy college students. Her father, Emmett J. Rice, was a governor of the Federal Reserve.

“You need someone who understands how to move things forward,” said Cecilia Muñoz, who served as director of the Domestic Policy Council under Mr. Obama. “It’s like being an orchestra conductor. You don’t have to play all of the instruments. You do have to get the most out of each part of the orchestra.”

Mr. Klain added, “Her signature issue is many issues.”

Valerie Jarrett, a longtime adviser to Mr. Obama, said Ms. Rice was chosen in part because she was a known entity to Mr. Biden, who wanted to enter office with a team of advisers who had already worked together.

During the Obama administration, “they had a close relationship, they shared a bathroom, and were on the same hall together,” she said.

Ms. Rice said good policy started with a good process that involved all the relevant agencies of government. When asked about a demand made by the N.A.A.C.P. during the transition for the Biden administration to create the position of a racial justice “czar” in the West Wing, she shook her head dismissively.

“A czar is a stand-alone person, with maybe one or two staff, who can’t command the interagency,” she said. “Everybody wants a czar. The reality is what you want for your interest, your issue, is to be integrated into everything.”

In an administration whose domestic agenda is dominated by big liberal ideas, her outreach so far has been primarily to union leaders, philanthropies and the leaders of other federal agencies.

But her own family may have also given her more insight into the perspective from the other side of the aisle than many Republicans give her credit for. Ms. Rice’s son, John David Rice-Cameron, was a vocal Trump supporter and in 2018 was the head of the Stanford College Republicans.

Ms. Rice’s decision to take the job has been viewed by some of her former colleagues as a political move to broaden her résumé with work on issues important to Black voters to run for office herself. She said she has not ruled out a run for office at some point, but that she did not take the domestic policy job for that reason.

“This is not a steppingstone,” she said.

Ms. Rice also laughed at the idea of “face time” with the president as a barometer of influence.

“I’m not in there as I was as national security adviser every morning with the P.D.B., which is fine,” she said, referring to the President’s Daily Brief. “This is the great benefit: I’ve been there, done this. I don’t need face time. I need to just get stuff done. I feel like I’m in a position to do that.”