The president had hoped to win credit for ending one of America’s “forever wars.” But new risks are coming into view. 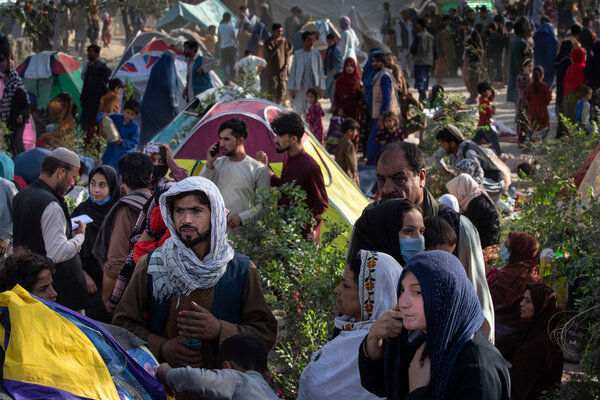 When President Biden announced his plan to withdraw U.S. troops from Afghanistan, the politics seemed relatively simple: Many polls showed that Americans supported ending the country’s nearly 20-year involvement in a war whose goals had become obscure.

But four months later, with the Taliban storming across the country much faster and more ruthlessly than expected, new political risks are coming into view for Mr. Biden, who had hoped to win credit for ending what he has called one of America’s “forever wars.”

Now U.S. officials are racing to evacuate Afghans who assisted the American military and may be targets of Taliban reprisals, and are contemplating the prospect of hastily evacuating the 4,000 Americans at the U.S. Embassy in the capital city of Kabul.

The threat of a Taliban conquest and new risks to U.S. personnel and allies in the country could cause Americans who had been paying little attention to Afghanistan for the past several years to reconsider their views, particularly if Republicans amplify a message of American failure and capitulation.

“Everybody’s worried about a repeat of the Saigon images,” said Brian Katulis, a foreign policy expert at the liberal Center for American Progress, referring to the chaotic April 1975 evacuation of the American Embassy in South Vietnam’s capital. Desperate Vietnamese clung to the struts of departing helicopters as the city was being conquered by Communist forces.

Americans remain focused on domestic matters like the coronavirus and the economy, and are unlikely to care much that the Taliban have captured unfamiliar cities like Kunduz, said Mr. Katulis, who has studied public opinion about foreign policy.

“But this could change,” he added. “If you have a parade of horribles continue to unfold in Afghanistan, it could seep into the public consciousness the way Iraq did in 2013 and 2014” when the Islamic State stormed across that country after American troops withdrew.

Speaking to reporters at the White House on Tuesday, Mr. Biden said he did “not regret” his decision, noting that the United States continued to support Afghanistan’s government and security forces but adding, “They’ve got to fight for themselves.”

Officials in the Biden administration have repeatedly expressed hope that negotiations between the Taliban and the Afghan government might produce a peaceful resolution short of a Kabul-based Taliban emirate, but prospects for successful talks are swiftly fading.

Fortunately for Mr. Biden, many Republicans in Congress have turned against foreign military adventures and supported a full exit from Afghanistan, to which President Donald J. Trump first committed last year when he struck a deal with the Taliban. Under the agreement, the group halted its attacks on U.S. forces and began peace talks with the Afghan government.