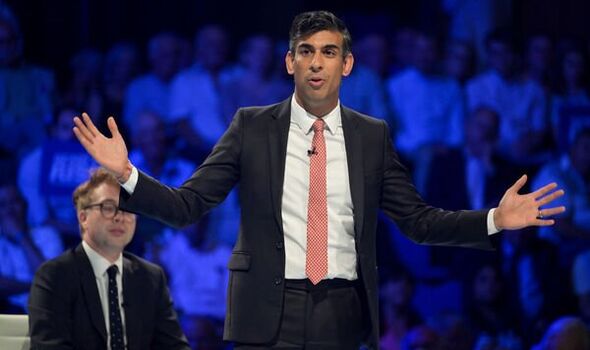 His pledge to cut the basic rate from 20 percent to 16 percent within seven years was blasted as a U-turn and a “manana promise” by allies of Tory leadership rival Liz Truss.

But the former Chancellor laughed off the suggestion he was endorsing Treasury orthodoxy, telling BBC Radio 4 he “ripped up  the rulebook” as chancellor to implement the furlough scheme during the pandemic.

He said: “What you saw from me was an exciting, radical but realistic vision about how to cut taxes for working people over the coming years.”

“What people saw from me in the pandemic was a chancellor who moved with incredible speed and radicalism and boldness to tackle a significant economic challenge.”

Cutting the basic rate from 20p in the pound to 16p would amount to a 20 percent tax reduction, the largest cut to income tax in 30 years.

He insisted his plan was “consistent” with his record in office and his leadership campaign, which has largely focused on the need to get inflation under control rather than tax cuts, insisting it could be funded by the proceeds of economic growth.

The Foreign Secretary has promised around £30billion of tax cuts within weeks of taking office if she wins, as part  of a package to help people struggling with the rising cost of living.

Mr Sunak’s bid for the premiership was given a double boost by the endorsement of Damian Green and former Conservative leader William Hague.

Mr Green, the chairman of the One Nation group of Conservative MPs, said he trusted the former chancellor to “unify the party”  and “conjure up a solution” to crises.

The TaxPayers’ Alliance chief John O’Connell said: “A 4p cut to income tax would come as welcome relief, given living standards are being endlessly squeezed.”

“The national insurance rise is severely denting people’s pay packets and stifling investment in jobs, so cutting both taxes would be a silver bullet for boosting growth.”

“Both Tory leadership contenders should commit to cutting income tax and national insurance.”