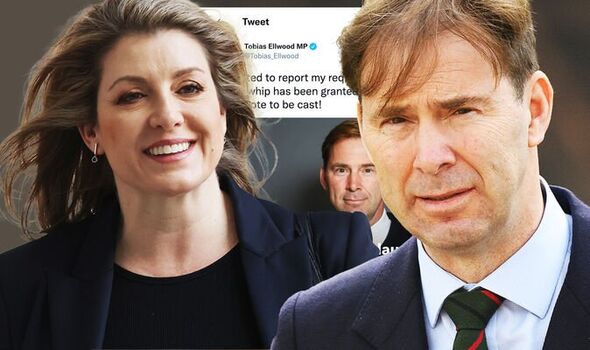 Yesterday’s vote saw Kemi Badenoch knocked out of the running to lead the Conservatives, and now only Mr Sunak, Ms Truss and Penny Mordaunt remain.

Mr Sunak is still out in front with 118 votes.

Even if Ms Mordaunt remains in second place, Ms Badenoch’s exit from the contest is excellent news for the Foreign Secretary as it could help her overtake Ms Mordaunt to go head-to-head with Mr Sunak for the premiership.

As Ms Truss sits to the right of the party like the eliminated Ms Badenoch, she is in a stronger position to sweep up votes from her supporters, leaving Ms Mordaunt to fall behind.

Tory MPs will vote later today for the final time. Results will be announced at 4pm.

Truss ally says Mordaunt is not ready to lead

Simon Clarke, the Chief Secretary to the Treasury, was asked by Sky News about why he shared criticisms of Ms Mordaunt by Lord Frost, who said a Mordaunt premiership would not succeed.

Mr Clarke is backing Liz Truss for the premiership.

He said: “I think it’s very important that people get to hear about the assessment of the qualities of people who are standing.

“Lord Frost’s warning is not in isolation, it’s been echoed by a number of people.

“I think it’s perfectly important that people who have, as I say, worked closely with candidates get to make clear their views.

“And people’s readiness for that job on day one is critical.

“That is of course one of the reasons why I’m supporting the Foreign Secretary.”

Good morning from London. I’m Aliss Higham, I’ll be bringing you all the latest developments on the Tory leadership contest today. Please feel free to get in touch with me as I work if you have a story or tips to share! Your thoughts are always welcome.