President Trump’s relationship to risk has often come down to an abiding self-belief: It will all probably work out for him because it generally has.

“Whatever happens, happens,” he said in 1991, declaring himself a “great fatalist” as his business fortunes wobbled.

“We’ll see what happens,” he said of North Korean nuclear diplomacy two years ago, blithely predicting that all would be fine.

“Risk plays a part in everything we do,” he advised in one of his pre-presidential how-to books. “I could get hit by a bus while I am crossing the street. Things happen.”

Yet the things that have happened this time — a president who has consistently played down the dangers of a deadly virus, joining the ranks of hospitalized patients in his high-risk demographic — are nothing like the circumstances of Mr. Trump’s past feats of political, financial and reputational survival.

He is, instead, facing something almost entirely unfamiliar to him: genuine uncertainty and peril, a moment when the comforts of his office and surname can only take him so far.

If anything, the toll of the virus, on Mr. Trump and his nation, has reinforced how little his life of chance-taking had prepared him for the cold math of infectious disease.

In business, he has transcended consistent misfires with the risk-cushioning assistance of tax-avoidance schemes, bankruptcy court, his father’s riches and a manicured vision of televised success on “The Apprentice.”

In politics, he has survived gambits that might have ended any modern presidency before his — urging a foreign government to investigate a rival, questioning the valor of war heroes, equivocating on white supremacy — because Republican allies have wagered that he is worth the trouble.

But the pandemic could be neither browbeaten nor charmed. It is not impressed with his Nielsen ratings. It is not afraid of attack ads in a congressional primary. It does not comport with Mr. Trump’s longstanding principle that to modulate, to adjust in the face of distressing information, is to acknowledge weakness.

In a video released on Saturday night, Mr. Trump cast his departure from the White House as a kind of noble gamble — not the function of health hazards but the mark of a leader fluent in cost-benefit analyses and willing to absorb the consequences.

“I can’t be locked up in a room upstairs and totally safe and just say, ‘Hey, whatever happens, happens,’” Mr. Trump said. “I can’t do that.”

The message was a functional extension of what supporters see as his swashbuckling political brand: a perpetual appeal to America’s inner dice-roller — “What do you have to lose?” he has long asked his audiences — requesting another four-year turn at the tables.

Now, as Mr. Trump sits in a hospital and doctors weigh the risks of sending him home, possibly as soon as Monday, the prospective downsides of the president’s standard impulses are impossible to ignore: The most protected man in America appears to have squandered his personal safety advantages, at once a testament to his administration’s failure to corral the virus and an encapsulation of Trumpian risk tolerance across the decades. 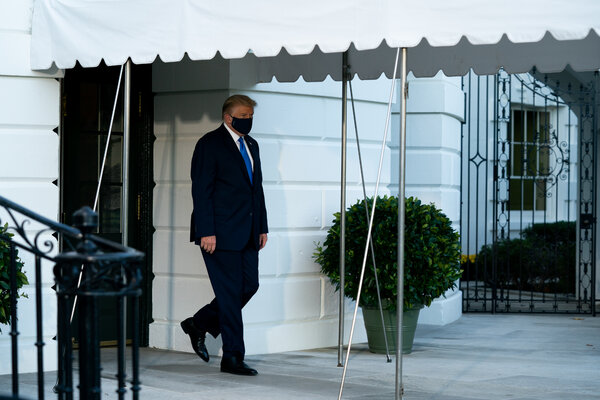 “He believes that he is such a winner that there just isn’t any way this could have felled him,” Gwenda Blair, a biographer of the Trump family, said of the president’s mask-less nonchalance in recent months. “He wasn’t, in his mind, running a risk because he’s pushed all the risk off onto other people — and the blame, if anything goes wrong.”

This instinct has informed his pandemic leadership from the start. He was eager to fault the Chinese, the Democratic governors, the news media. He insisted he had a plan but at times offered little more than suggestions for dubious medical treatments and casual assurances that everything would work out.

March: “It’s something we have tremendous control of.”

The true course of the pandemic in the months that followed wholly contradicted Mr. Trump but rarely seemed to humble him.

He hungered for the balm of adoring crowds at his rallies, so he brought them back against the advice of public health experts, accusing opponents of “trying to Covid Shame us.”

He did not care for masks, so he did not usually wear masks, saying in May that he was “very far away from everyone” so he would probably be OK.

As recently as Tuesday, at the debate against Joseph R. Biden Jr., Mr. Trump taunted the Democratic nominee for being gratuitously careful, in his estimation.

“Every time you see him, he’s got a mask,” the president said. “He could be speaking 200 feet away from me, and he shows up with the biggest mask I’ve ever seen.”

Even on Thursday night, after the public revelation that a top aide, Hope Hicks, had tested positive for the virus, Mr. Trump took care not to betray too much concern, reverting to a favored phrase before his own results were announced: “We’ll see what happens.”

More often than not, at least before the pandemic, the lesson for Mr. Trump seemed to have been that nothing especially terrible would happen if he followed his gut. For as long as he has been a politician, it has felt, to supporters and opponents, as if he were getting away with something — saying what you shouldn’t say, doing what you shouldn’t do — and defying the template for political risk management.

Republicans describe Mr. Trump as a kind of executive stuntman, trying motorcycle flips that he should probably avoid and hoping they land.

“For a lot of people, that causes admiration,” said Carlos Curbelo, a Republican former congressman from Florida who clashed at times with Mr. Trump and did not support him four years ago, “the way people would watch a daredevil.”

When harnessed appropriately, this approach can come off as distinctly American, projecting a sort of frontiersman attitude embedded in the idealized version of national swagger.

“This is America,” Mr. Trump said in his video over the weekend, never quite completing his point. “This is the United States.”

In his national stewardship during the pandemic, Mr. Trump’s defenders have sensed not a reckless disregard for science but a cleareyed appraisal of pros and cons. They note that even those closely following medical guidelines can contract the virus.

Robert Jeffress, the pastor of First Baptist Dallas and a prominent evangelical Trump supporter, said his church had followed the president’s example, reasoning that a full shutdown would be both “100 percent safe” and devastating to the entire enterprise.

“We have to balance risk and reward,” he said, adding that masks and distancing were encouraged at the church. “I don’t think people who are drawn to the president have a death wish.”

It is not clear if or how Mr. Trump’s own view of pandemic-era risks and rewards might change now that he is among the afflicted. Earlier in the year, the ferocity of the virus appeared to resonate most with the president when events connected to him directly — his friend, Stanley Chera, falling ill and dying; his home borough of Queens suffering through scenes he had “never seen before.” But any tempering effect from these snapshots seemed brief.

Even before his illness, the president’s unruly debate performance struck some viewers as the anxious tell of a flailing man, whose sundry safety nets of power and providence might be falling away.

“I think we’ve been trending toward that point anyway,” Mary Trump, his niece and a slashing critic, said in an interview. “He knows there’s things he can’t control anymore.”

She added that Mr. Trump had long viewed sickness and other physical struggles as manifestations of weakness. An acute case of the virus, she suggested shortly before his hospitalization on Friday, could expose him to “a kind of pain he’s never experienced before.”

This alone might prompt a reckoning for him, or at least a recollection.

In a 2016 interview with The New York Times, Mr. Trump recalled the bleak final months of his mentor Roy Cohn, the infamous lawyer who died of AIDS in 1986. As the end neared, Mr. Trump maintained a cool distance and moved his cases elsewhere without telling Mr. Cohn why, rationalizing that there was no need to hurt the feelings of someone “so weak” by then.

But at least one episode still ate at Mr. Trump three decades later: Mr. Cohn’s disbarment shortly before his death.

“They only got him because he was so sick,” the future president said ruefully. “They wouldn’t have gotten him otherwise.”

Related posts:
Recent Posts
Latest Posts
Lori Loughlin starts jail sentence for college admissions bribe scandal
Carb Country
Investor Colin Neal on Polar Capital’s acquisition drive
Four children rushed to hospital from house fire after suspected arson attack
Opinion: A one-size-fits-all Covid strategy is futile
This website uses cookies to improve your user experience and to provide you with advertisements that are relevant to your interests. By continuing to browse the site you are agreeing to our use of cookies.Ok