US president derides explosive hearing as ‘fake’, but says his ex-lawyer, Michael Cohen, told truth on ‘no collusion’. 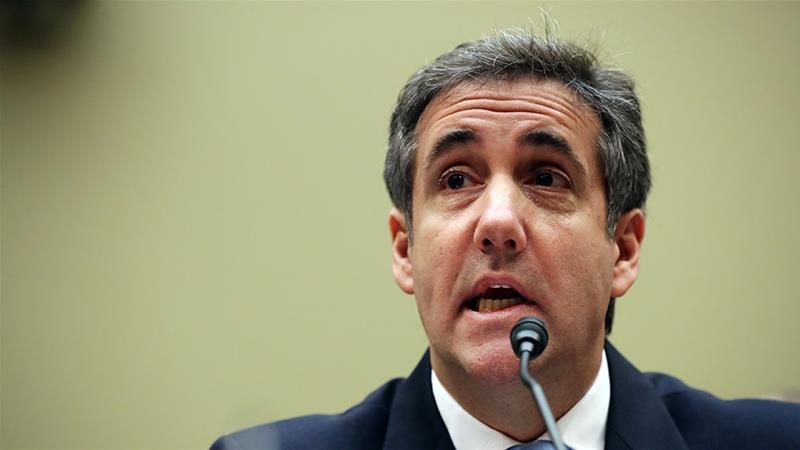 US President Donald Trump said he was a “little impressed” that his former personal lawyer told Congress there was “no collusion” between Trump’s presidential campaign and Russia.

“He lied a lot, but it was very interesting because he didn’t lie about one thing, he said no collusion with the Russian hoax,” Trump said on Thursday.

“I was actually impressed that he didn’t say, ‘Well, I think there was collusion for this reason or that’. He didn’t say that,” Trump added.

Cohen told US politicians on Wednesday that he had no “direct evidence” that Trump or his aides had colluded with Russia to get him elected. He added, however, that he had his “suspicions”.

In his explosive day-long testimony, the one-time fixer described what he said were incidents in which Trump lied, including the payment of hush money to women.

Cohen said Trump lied throughout the 2016 election campaign about his business interests in Russia and had advance knowledge that emails damaging to Hillary Clinton would be released during the campaign.

Sceptical and, at times, hostile Republicans noted repeatedly that Cohen has already pleaded guilty to lying to Congress.

Trump, speaking at a press conference in Vietnam after his second summit with North Korea leader Kim Jong-un ended early on Thursday, said he tried to watch as much of Cohen’s marathon congressional hearing as he could.

He slammed the hearing as “fake” and said it was a “terrible thing” for Democrats to hold it during the summit.

In a tweet, Trump suggested Cohen was testifying before Congress to reduce his prison sentence.

Cohen was sentenced to three years in prison after pleading guilty to several charges, including fraud, lying to Congress and campaign finance violations. His prison sentence is set to begin in May.

Cohen is testifying behind closed doors to the House Intelligence Committee on Thursday, capping a week of testimonies on Capitol Hill.

Cohen did not respond to questions from the Associated Press as he arrived this morning for his third and final session in Congress this week.

His private testimony before the House Intelligence Committee is expected to last all day.

The panel has been probing Russian election meddling and any collusion with the Trump campaign.