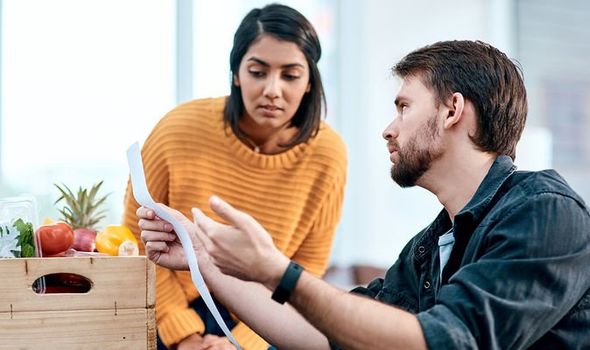 The Consumer Prices Index (CPI) rate of inflation jumped from two percent in July to 3.2 in August, the highest it has been since March 2012 and the biggest jump since records began in 1997. The Office of National Statistics (ONS) said the surge was partly down to cuts to restaurant bills last year and is likely to be temporary.

But some economists fear other factors will keep prices high and predict inflation could rise to more than five percent in the “near future”.

She said: “It was given a significant shove by the Eat Out To Help Out discounts a year earlier, which will drop out of the figures next month.

“However, much of this enormous jump is powered by the same alarming imbalance between supply and demand that has seen yawning gaps open up on the supermarket shelves.”

And she warned: “It spells trouble for shoppers, savers and the broader economy.”

Jonathan Athow, ONS deputy national statistician, confirmed: “August saw the largest rise in annual inflation month on month since the series was introduced almost a quarter of a century ago.

“However, much of this is likely to be temporary as, last year, restaurant and cafe prices fell substantially due to the Eat Out To Help Out scheme, while this year prices rose.”

But global supply chain pressures and the UK’s lorry driver shortage have helped push up costs for raw materials. The ONS said it was unclear how long it would take for those problems to filter through to the wider inflation rate.

Its figures showed Eat Out To Help Out combined with the temporary VAT cut for hospitality last summer had the biggest impact on this August’s CPI, with catering services inflation soaring by 7.9 percent.

Food and non-alcoholic drink prices surged by 1.1 percent month on month ‑ 0.3 percent over the year.

Petrol prices hit 134.6p per litre, compared with 113.1p a year earlier. And used car prices leapt 4.9 percent and have risen by 18.4 percent since April.

The bigger-than-expected leap in inflation heaps further pressure on the Bank of England ahead of its interest rates meeting next week, with CPI sailing past its two percent target.

The Bank has so far insisted big inflation rises will be temporary, but fears are mounting that price pressures may be more sustained than it expects as the cost of living continues to rise.

Inflation under the Retail Price Index measure increased to 4.8 percent last month. Kevin Brown at Scottish Friendly said: “Many indicators have been showing inflation is likely to hit four percent, but we believe it could reach over five percent in the near future.”

Yael Selfin, chief economist at KPMG UK, said: “Higher inflation will inevitably raise questions for the Bank of England on the timing of tightening monetary policy and interest rate hikes to contain inflationary risks further down the line.”

Allan Monks, at JP Morgan, said rates could rise in the second quarter of 2022.

But she added: “The expectation is that the economy will rebalance as demand rotates away from goods to services, pent-up savings are spent and tax hikes cool demand.

“Similarly, supply chain disruptions ought to gradually dissipate. Together, this should help drive inflation back down.”

The biggest jump in inflation for more than 20 years will come as no surprise to those who have been wrestling with rising costs over the past few months.

Prices are up 3.2 percent in a year. While this includes an artificial bump thanks to last year’s Eat Out To Help Out scheme, it reflects rises in the cost of everything from filling up the car to putting food on the table.

Petrol prices have fuelled much of the pain. This time last year they had risen slightly from lockdown lows to 113.1p per litre, but by this August they had shot up to 134.6p, the highest in eight years. And relatively small, but relentless rises in the price of food has also fed into higher inflation.

And there’s no end in sight. We’ve had plenty of warnings from retailers that prices are on the march over supply chain problems and driver shortages.

Rising inflation poses a particular problem for savers, because if your money is in an account paying less than inflation it loses spending power with every day that goes by.

While no normal savings account currently beats inflation, you should still do what you can to make the most of your money.

Your emergency savings fund of 3-6 months’ worth of essential expenses should be in a competitive easy access account ‑ where you can earn up to 0.65 percent.

Money you need within five years, but not immediately, can then be tied up for short periods in return for a better rate. And if you have money you don’t need for 5-10 years or more you should consider stock market investments.

While its value will rise and fall in the short term, you should be able to take advantage of long-term growth in the markets.

When savers consider tying their money up they worry the Bank of England will raise interest rates and they’ll miss out. However, predicting interest rates is notoriously difficult.

Any number of shocks over winter, from lockdowns to unemployment, could dampen demand and bring inflation under control without any need for a rate rise.

It means savers need to consider what’s right for their needs right now and track down the best possible rate they can today, rather than leaving their savings languishing in high street easy access accounts paying a dismal 0.01 percent, while they try to second guess what might happen to rates months down the line.