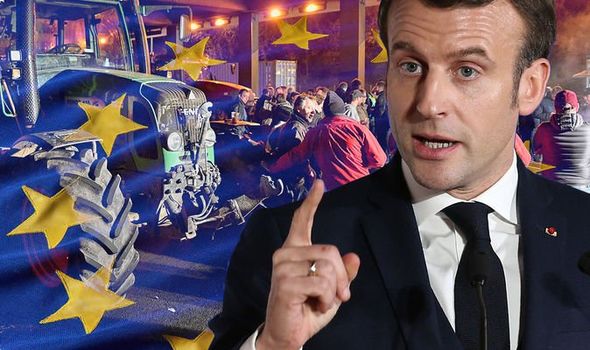 Britain’s departure from the bloc has left the EU short of some 75 billion euros, and the 27 remaining states failed to agree on the size of the 2021-27 budget or how to spend it. “Farmers: we will fight for them on the European front and make sure France’s CAP (common agricultural policy) payments are not reduced. Our farmers should not be the ones to pay for Brexit,” Mme de Montchalin told politicians.

Paris “will reject any budget deal” that slashes French farming subsidies, she continued.

Her comments echoed those made by President Emmanuel Macron last weekend, who said that France would resist efforts to cut the CAP envelope after an EU summit on the bloc’s next budget ended in deadlock.

The CAP is the largest single component of EU spending, accounting for 38 percent of the €1.1 trillion 2014-2020 budget. Agriculture, however, contributed just 1.1 percent to the bloc’s gross domestic product (GDP) over that period.

The Macron government has repeatedly called on Brussels to maintain a large budget for the CAP, of which France is the main beneficiary.

Paris dismissed an initial proposal in 2018 by the European Commission, a five percent cut to the CAP budget post-Brexit, insisting farm spending should at least be kept at its current level.

“On the CAP we defend an ambitious budget. CAP cannot be the adjustment variable of Brexit. We need to support our farmers,” M Macron said during a visit to the annual Paris farm show.

The 42-year-old centrist, who is already eyeing re-election in 2022, has had an awkward relationship with French farmers, a powerful lobby in the bloc’s biggest agricultural producer.

He was initially praised for introducing legislation aimed at sharing profits more evenly along the food chain, but the effects have yet to be felt at farm level.

In addition, his determination to phase out the controversial weedkiller glyphosate has fuelled farmers’ resentment at being cast as polluters.

European leaders last week failed to agree on the next seven-year budget, as a funding shortfall created by Britain’s departure cast a harsh spotlight over spending priorities.

Britain was the second-biggest net contributor to the budget after Germany; and its departure has left a hole of some €75 billion (£63.76 billion) in the bloc’s coffers.

The 27-member bloc wants to spend more on climate, migration, technology and security, but richer net contributors refuse to pay more, and beneficiaries want to retain the support they currently receive.

The so-called “frugal four” – Austria, Denmark, Netherlands and Sweden – want the budget reined in to reflect the UK’s absence and to avoid having to shoulder a bigger budgetary burden.

But the so-called “friends of cohesion” – 16 member states including Italy, Spain, Portugal, Greece, Poland and Hungary – want to ring-fence EU spending on things like infrastructure and farm subsidies.

The trillion-euro-plus budget, or multi-annual financial framework (MFF), is meant to be operational from next year and run to the end of 2027.

No date has yet been set for another summit.