WASHINGTON — For 99 percent of Americans, this question will never come up in a job interview: Can you hang from a bar and tuck your legs to your chest?

It has, however, become a central issue for the Army, where fitness levels of recruits have come under greater scrutiny over the past two decades, precisely the same time that women have been seeking entry into elite combat units and advancement in leadership roles.

Now, the Army is racing to approve significant changes to its legendary physical fitness test, the first revision since 1980, which will include offering soldiers an alternative to the leg tuck, a flash point for women, especially those who have given birth.

At the same time, the new version of the test, which is required twice a year, does away with separate scoring curves based on gender and age. In its earliest rollout among 14,000 soldiers, 65 percent of a small set of women failed the new test, while 10 percent of men did.

Army leaders are also contemplating changes to the role of fitness in promotion considerations, which critics argue has overshadowed expertise and intellectual preparation for jobs in such emerging areas of conflict as cyberwarfare.

Across the force, troops and their commanders know that major changes to these requirements would amount to a significant cultural shift for the fitness-obsessed force.

The appropriate role of fitness in the modern Army — and the best way to evaluate it — has attracted the scrutiny of Congress, which has ordered the Army to conduct an independent review of its newest fitness test over concerns that it has made it harder for women to succeed.

“The importance of this test goes beyond the gender issue,” Senator Richard Blumenthal, a Connecticut Democrat who has focused on the area for years, said in an interview. “It raises the issue of how to attract different kinds of skills and talent to the military. We need to make sure the test does not exclude doctors, cyberwarriors and others whose physical fitness is important but maybe not in the same exact way as a man or woman going into combat.”

Not all women in uniform agree that the standards should be lowered.

Lower female fitness standards “reinforce the belief that women cannot perform the same job as men, therefore making it difficult for women to earn the trust and confidence of their teammates,” wrote Capt. Kristen Griest, who was also one of the first two women to graduate from Army Ranger School.

The Army’s top brass is seeking to find a balance between an antiquated test and the realities of a diverse force that will be needed to prevent a contraction in recruiting and retention.

“One thing we have seen over the last 20 years of combat is that we were engaging in training for cross country but we were playing rugby,” said Maj. Gen. Lonnie G. Hibbard, the commanding general for the U.S. Army Center for Initial Military Training. The military was concerned that too many soldiers, not fit for the fight, were getting injured too often as a result, some separating from the Army early.

The introduction of the new test in 2018, which immediately attracted dispute, came at a time of greater gender integration in the Army, he said, and the issues were immediately intertwined. “The Army was not able to separate gender integration with health of the force,” General Hibbard said. “In hindsight, all of this has been a perfect storm that has not helped us communicate what we are trying to do.” 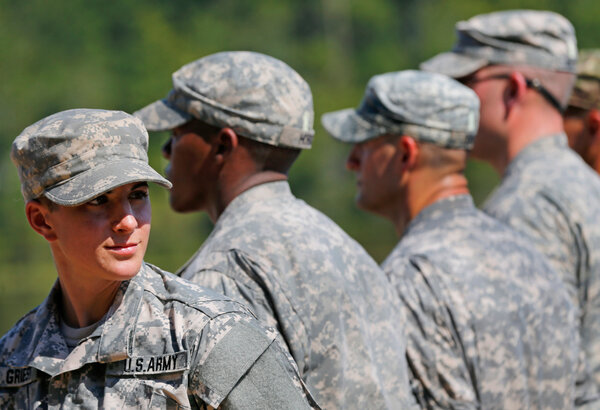 The fight over fitness has hardened views that the military, which in many ways lit the path for racial and gay integration in American institutions, trails the civilian world in workplace gender dynamics.

In the civilian workplace, jobs can generally be modified along ergonomic principles that do not apply in a military setting. In contrast, war is a gender-neutral task; carrying the dead and injured, tossing grenades, kicking in doors, carrying heavy loads can fall on any soldier, even a cook, but there is no getting away from the fact that there are variations in muscle strength between genders.

Even so, thousands of women have had successful careers in the Army with the old modified fitness test standards.

“The intent was not to discriminate against women,” said Nora Bensahel, a visiting professor of strategic studies at the Johns Hopkins School of Advanced International Studies who has extensively studied the new standards, known as the Army Combat Fitness Test. “But this test affects your promotion, and would have a disparate impact. So, many women see this as the intent of the Army to push them out.”

Since 1980, all active-duty soldiers have been required to take a test that measures their ability to do situps, push-ups and a two-mile run. Now, Army leaders, armed with a sophisticated fitness analysis, hope to create a new test that will better track the fitness demands of combat. The new approaches generally require far more upper-body and core strength than the older version.

The new 120-minute test, known as the Army Combat Fitness Test, features six events that cover speed, endurance and strength. The standards to pass are identical for men and women, and for all ages. A soldier must achieve 360 points out of a maximum 600 to pass, and greater scores have historically greatly increased chances for promotion.

The Army planned to have all soldiers in the active-duty force, National Guard and Reserve begin taking the new test last October. Then Congress mandated that the test not be used for promotions and other official capacities, instead allowing continued testing and data collection. Army leaders say they expect the next version to become official in March 2022.

The coronavirus pandemic added another wrinkle by making group fitness training harder, if not impossible. (Another criticism of the new test is that training for it requires too much equipment and gym access, hampering lower-income soldiers and those in the National Guard who may not have the time and money to train.)

In the weeks since Captain Griest’s piece, women in the Army have been having intense discussions on social media about fitness standards.

“I was willing to give my life for my country, and I deployed, no questions asked,” said Capt. Sara Ingrao, who, with 12 years in the Army, was just selected for promotion to major. “But when it came to changing the structure of how we look at fitness, women were not even part of that conversation.”

Captain Ingrao sees many flaws beyond the leg tuck, a task all the more difficult for women who have recently given birth, such as herself. Women are expected to weigh less than men, she noted, but need to gain quite a bit of muscle weight to do the heavy dead-lift that the new test requires.

“When I asked the sergeant major of the Army what is the updated postpartum policy for the test, he chuckled,” she said.

That is when she started organizing other women to push back. “I am a captain and I can get people to listen to me,” said Captain Ingrao, who stressed that, despite her criticism, she expects the military, a beloved family tradition, to be her lifelong career. “I have women who don’t have the same level of influence.”

Captain Griest, the Ranger School graduate who now serves with the Army Talent Management Task Force, views her leadership role differently. She believes that women can be pushed to the highest level of physical standards for combat, and believe she should model that for young recruits and help them achieve difficult fitness goals.

“Fitness in the Army is so integral to your job,” said Captain Griest, adding that she wrote her piece because “women in combat arms are pretty underrepresented.” She wanted to give them a voice.

The Army needs to determine “what is needed on a battlefield and just hold everyone to that standard,” she said. “For instance, I want a soldier to be able to pull their body over an obstacle in the infantry.”

She said she learned to dead-lift far more weight than she ever imagined she could when properly coached. “I have heard people criticize me and say I have internalized misogyny,” she said. “I think I have a sense of internalized empowerment.”

The Army is expected to announce changes to the test this month. Soldiers will now be able to choose, without penalty, between a leg tuck and a plank to test core strength. The Army has also eliminated, for now, a variation in standards for different types of jobs, relying instead on a baseline score for all soldiers.

Leaders are also evaluating the percentage of points that fitness will account for in future promotion for enlisted soldiers. It will continue to test men and women and study the data; women are already faring better with the plank variation. “I think it has been a good learning experience,” General Hibbard said.

Some critics said the changes were not enough for a modern military.

“The Army in particular has an obsession with physical fitness,” said Emma Moore, a research associate for the Military, Veterans, and Society Program at the Center for a New American Security. “We hold firm that everyone going into combat arms should be held to a high standard, but why does someone working on cyberlogistics have to even take the same test? We should be trying to support people on a fitness journey.”