With new “I’m Vaccinated” badges, dating apps are plugging into a cultural conversation over how Americans can approach postpandemic dating. 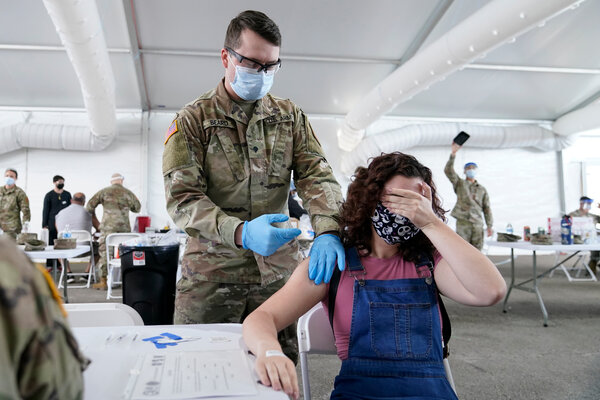 By Katie Rogers and Noah Weiland

WASHINGTON — It took a nonzero amount of awkwardness, but the Biden administration highlighted a new plan on Friday to encourage more people to get vaccinated: an effort by popular dating apps to encourage pent-up young singles to promote their vaccination status to would-be right-swipers.

“We have finally found the one thing that makes us all more attractive: a vaccination,” Andy Slavitt, one of President Biden’s top coronavirus advisers, said gamely during a virtual briefing for reporters, though he made clear he had been put up to it.

Minutes later, he was asked a follow-up question about the dating sites. “I suppose I have to take that question, huh?” he said. “All you, Andy,” said Dr. Vivek Murthy, the surgeon general.

With other initiatives encouraging vaccinations and a maskless summer tantalizingly close, the administration has enlisted celebrities like Ryan Seacrest and Eva Longoria to spread the message. But to sing the praises of dating apps, the White House chose Mr. Slavitt as the face d’amour, and he introduced the news with all the enthusiasm of a driver’s ed instructor.

“According to one of the sites, OkCupid, people who display their vaccination status are 14 percent more likely to get a match,” Mr. Slavitt said as Dr. Anthony S. Fauci, the government’s top infectious disease expert and a bit of a sex symbol in some circles, appeared to suppress laughter. Mr. Slavitt added, “In all seriousness, people are interested in other things in life besides their vaccine.”