NEW DELHI (Reuters) – Mohammad Zubair was on his way home from a local mosque in northeast New Delhi when he came across a large crowd. He turned toward an underpass to avoid the commotion; it proved to be a mistake. 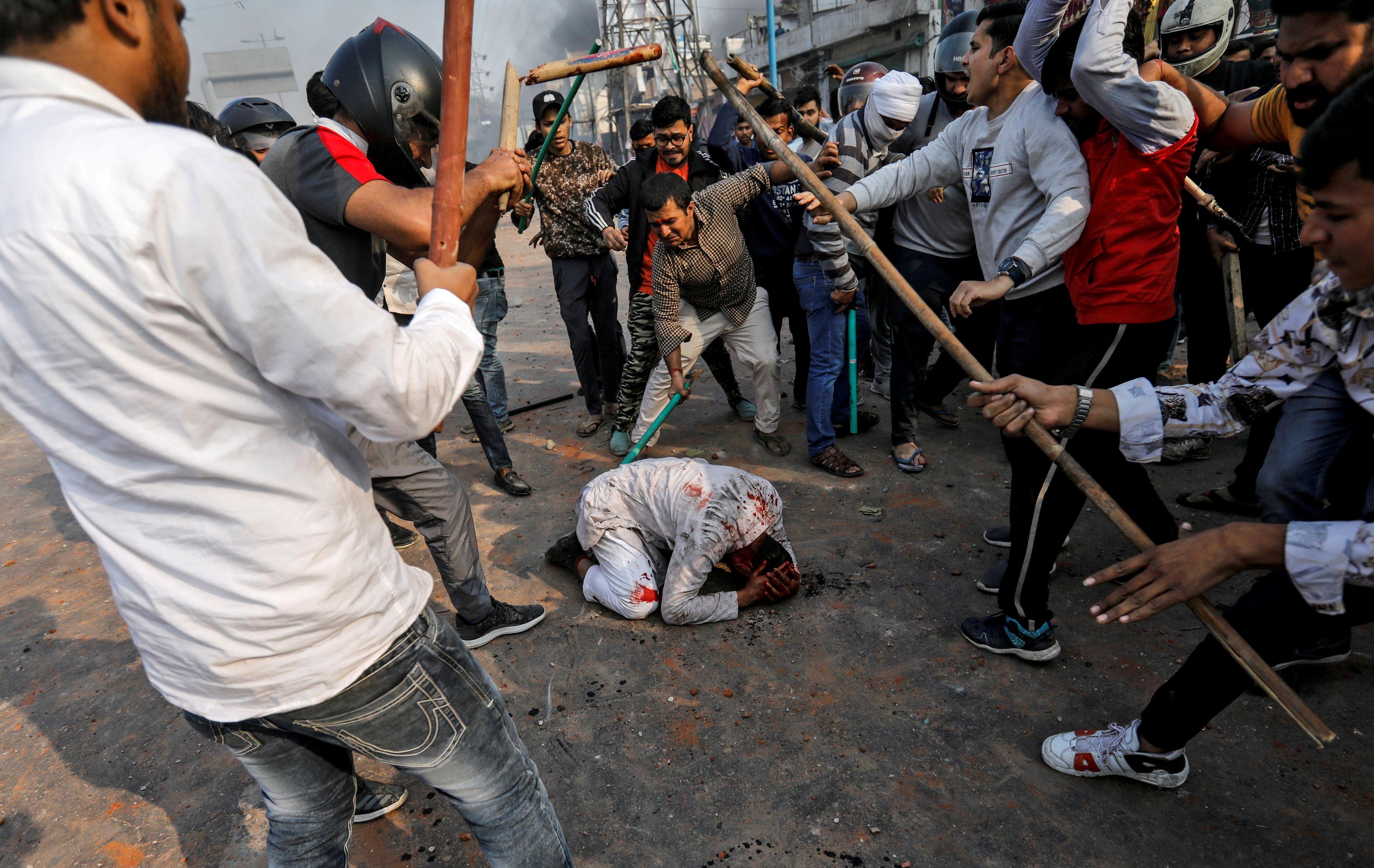 Within seconds, he was cowering on the ground surrounded by more than a dozen young men, who began beating him with wooden sticks and metal rods. Blood flowed from his head, spattering his clothes. The blows intensified. He thought he would die.

Zubair provided his version of events at a relative’s home in another part of the capital, his head wrapped in bandages.

The mid-afternoon attack on Monday, captured in a dramatic Reuters photograph, came against a backdrop of tension and violence.

Near the area of the Indian capital where it occurred, Muslim and Hindu protesters had been fighting pitched battles for hours across a concrete and metal barrier that divided the main thoroughfare, throwing rocks and primitive petrol bombs.

But the sight of a mob screaming pro-Hindu slogans suddenly turning on an unarmed individual, apparently because he was a Muslim, was a sign that growing tensions between members of India’s two dominant religions may be hard to contain.

Unrest across India began in December with the passing of a law that makes non-Muslims from some neighboring nations eligible for fast-tracked citizenship – a move many Muslims say is discriminatory and marks a break from India’s secular traditions.

Persecuted religious minorities including from Hindu, Sikh, or Christian communities are eligible for citizenship, but those from Islam do not enjoy all the same advantages.

“They saw I was alone, they saw my cap, beard, shalwar kameez (clothes) and saw me as a Muslim,” Zubair told Reuters. “They just started attacking, shouting slogans. What kind of humanity is this?”

“EVERYTHING WILL BE FINE”

BJP spokesman Tajinder Pal Singh Bagga said his party did not support any kind of violence, including the attack on Zubair. He blamed rival parties for stoking the chaos during U.S. President Donald Trump’s visit in order to damage India’s image.

“This was 100 percent pre-planned,” he said of the violence, adding that his party or its policies had nothing to do with the chaos. Reuters has no independent evidence that the protests were planned in advance.

Bagga said that the federal government, which controls Delhi police, moved to deploy paramilitary forces in order to bring the situation under control.

“I believe within 24 hours everything will be fine,” he added.

Delhi police were not immediately available for comment on the attack on Zubair.

Since cruising back to power in May, Modi has pursued a Hindu-first agenda that has emboldened his followers, who account for about 80 percent of the population, and left India’s 180 million Muslims reeling.

Now opponents and supporters of the law, largely divided between Muslims and Hindus, are facing off against each other. Some say the polarization evokes a dark chapter in India’s past.

“The violence is now happening in tiny pockets of Delhi and reminds you of the beginning of the 1984 anti-Sikh riots,” said Yogendra Yadav, a political scientist who leads a small political party opposed to the BJP.

He was referring to mob attacks on the Sikh minority after members of the community assassinated then-Prime Minister Indira Gandhi. Thousands of Sikhs were killed in cities including Delhi in what Indian investigators said was organized violence.

Modi appealed for calm on Wednesday after at least 20 people were killed and more than 200 injured in some of the worst sectarian violence in New Delhi in decades. [nL3N2AQ12X]

The citizenship law behind the unrest is one of several steps taken by Modi’s government since its re-election that have appealed to the Hindu majority.

In August, it stripped Kashmir, India’s only Muslim-majority state, of its special status, a move which Modi defended as a way of integrating the region with the rest of the country.

In November, the Supreme Court handed Hindu groups control of a contested site in the city of Ayodhya that paves the way for a temple to be built on a site where a mosque once stood. That was a central election promise made by the BJP.

Modi’s position as chief minister of Gujarat state during some of the worst riots in India’s independent history that took place there in 2002 has long stoked mistrust among some Muslims.

Up to 2,500 people, mostly Muslims, were killed during riots sparked after 59 Hindu pilgrims were burned to death when their train was set alight by suspected Muslims.

In the subsequent investigation, Modi was absolved of wrongdoing, even as dozens of people on both sides of the riots were convicted.

Before this week’s clashes in New Delhi, 25 people had been killed in running battles between protesters and police across the country.

That number has now nearly doubled after two days of arson, lootings, beatings and shootings in parts of northeastern New Delhi that police forces have struggled to contain.

Delhi police said in a statement late on Tuesday that they were making every effort to contain the clashes and urged people to maintain the peace.

Witnesses said police and paramilitary forces were patrolling the streets in far greater numbers on Wednesday. Parts of the riot-hit areas were deserted.

Several of those killed and injured had been shot, according to two medics at the Guru Teg Bahadur Hospital, where many of the victims were taken. Reuters could not determine who had fired on them.

Among them, Yatinder Vikal, a 33-year-old Hindu, was brought in with a gunshot wound to his right knee. His brother said Yatinder was driving a scooter when a bullet hit him.

Reuters witnesses at a local hospital spoke to both Hindu and Muslim victims who were injured in the violence. 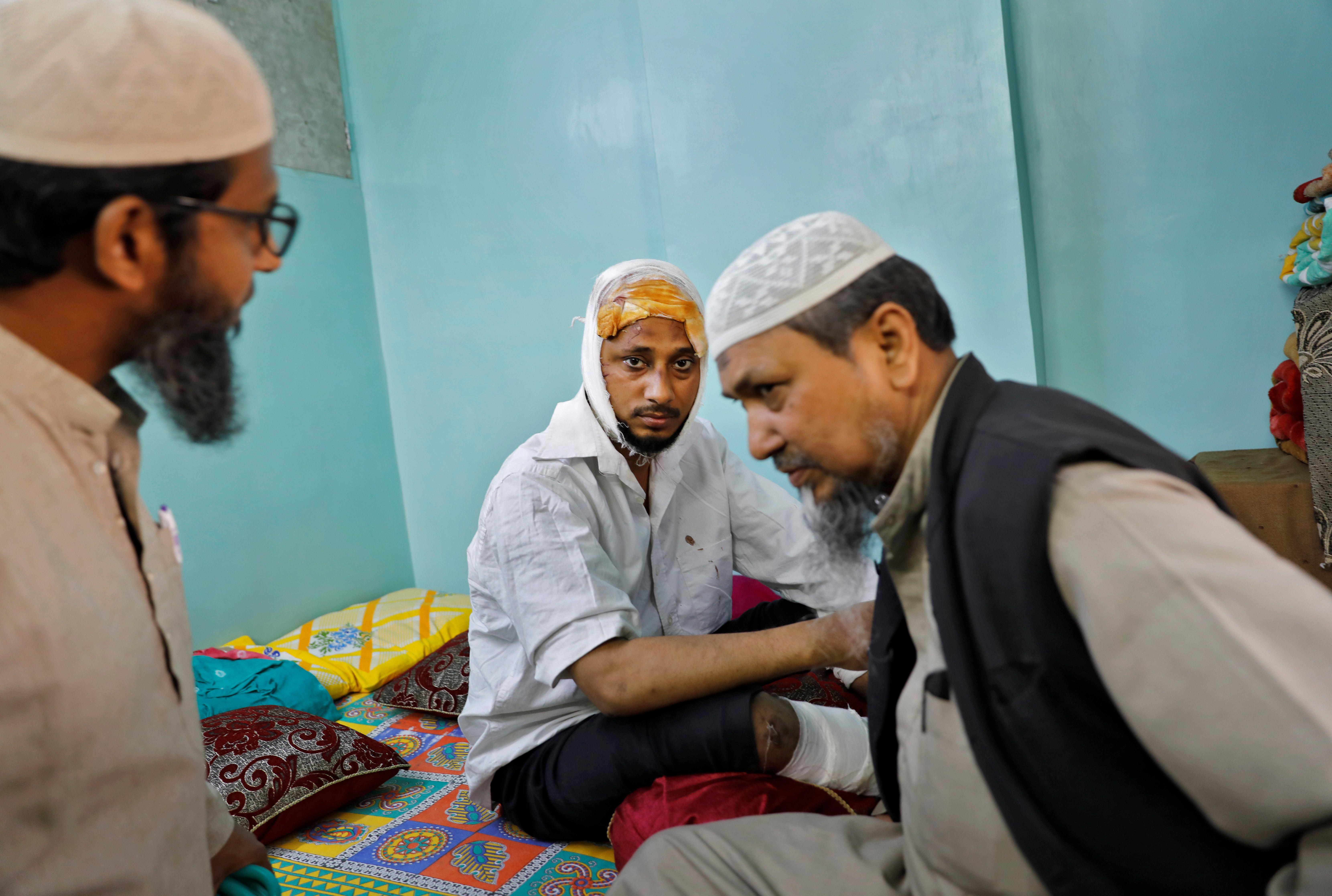 An unconscious Zubair was eventually dragged to safety by fellow Muslims who came to his aid after throwing stones to disperse his attackers.

The 37-year-old, who makes a living doing odd jobs, was rushed to hospital where he was treated for wounds to his head and released late on Monday.

“I was thinking ‘I’m not going to survive this’,” he recalled. “I was remembering my Allah.”