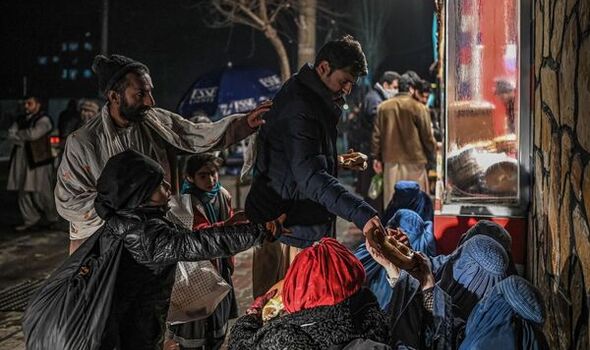 A year on from the Taliban takeover of Afghanistan, Lord Dannatt said the withdrawal of aid had led to babies dying and people going hungry.

President Biden is said to have ruled out releasing the funds after the Al-Qaeda leader, Ayman al-Zawahiri, was found living in Kabul.

Taliban fighter Niamatullah Hekmat, who entered Kabul as the capital fell, said yesterday: “We fulfilled the obligation of jihad and liberated our country,” said, a fighter who entered the capital on August 15 last year just hours after then-president Ashraf Ghani fled the country.”

“The time when we entered Kabul, and when the Americans left, those were moments of joy.”

Taliban flags fluttered from lamposts along the road to the airport.

Western nations raced to depart in a largely chaotic and embarrassing exit, and the victorious Taliban, whose previous government was toppled in the aftermath of 9/11.

Lord Dannatt said: “We quite unnecessarily withdrew in precipitate haste a year ago, but then I think absolutely outrageously have cut aid to Afghanistan. People are starving.”

“We went there to help the Afghan people and now we’re just actually watching them suffer – I think it’s outrageous.”

“And I think Priti Patel and other members of the government should take no pride in what is happening.”

“They should be starting again – as should the Americans who are principally responsible for what happened – should be significantly increasing their aid packages again to allow the people to have food and to thrive in Afghanistan.”

The Taliban takeover has driven millions more Afghans into poverty and even hunger, as the flow of foreign aid slowed to a trickle.

A year on, teenage girls are still barred from school and women are required to cover themselves head to toe in public, with only the eyes showing.

Lord Dannatt said: “Having cut off aid to Afghanistan – that is why babies are dying in hospitals, that is why people are starving up and down the country.”

“Why should we suddenly stop helping the people now because we don’t like the Taliban?”

Tens of thousands of girls have been shut out of secondary schools, while women have been barred from returning to many government jobs.

Malika, 21, said she lived in daily fear for her life because her husband, Bashir, was being hunted by the Taliban because he used to be a government worker.

“If the Taliban finds us, they will immediately kill us.”

“When the Taliban want someone, they will arrest their whole family until they get the person they want.”

“Then that person disappears and nobody knows if they are alive or not.”

A year ago, thousands of Afghans had rushed to Kabul International Airport to flee the Taliban amid the US military’s chaotic withdrawal from Kabul after 20 years of war the US’s longest conflict.

Taliban spokesperson Zabihullah Mujahid said: “This day is the day of the victory of truth over falsehood and the day of salvation and freedom of the Afghan nation”