Witnesses, activists blame Russia for the attack that targeted a poultry farm in Maaret Misreen town. 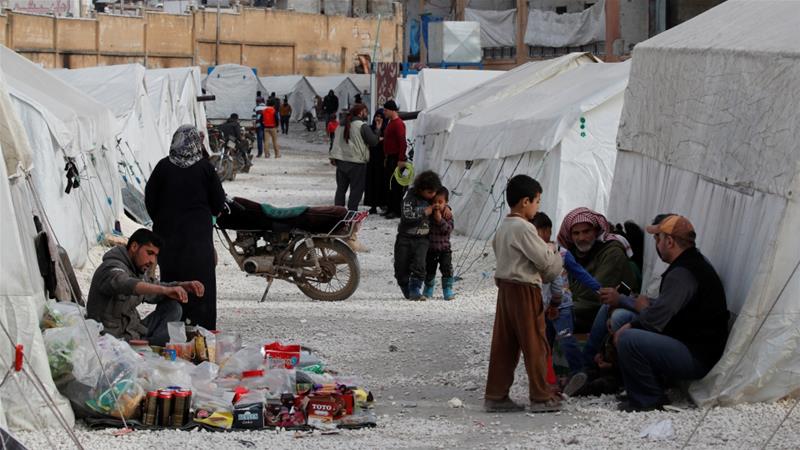 Antakya, Turkey – At least 15 civilians have been killed in an air attack in Syria’s northwest province of Idlib, civilians and civil defence teams said.

The attack took place in the vicinity of the Maaret Misreen town, north of Idlib city centre, overnight on Thursday and targeted a poultry farm where dozens of displaced Syrians had taken refuge.

“At around 2:30am local time [23:30 GMT on Wednesday], Russian warplanes targeted the road between Maaret Misreen and Batinteh village,” said Abedalrazzaq Zaqzooq, a hospital worker. “As first responders and other civilians gathered around at the site, the Russian plane struck again.”

Zaqzooq said at least 20 people were injured and taken to the medical complex in Maaret Misreen after eight missiles hit the poultry farm.

“The most devastating image I saw with my own eyes was the arrival of two babies to the hospital,” he said.

“They were both under six months and were rescued from under the rubble but were pronounced dead at the hospital.”

About 50 people were living on the farm. These families were displaced from Aleppo’s western countryside and southern Idlib – two territories that are now under the control of Syrian government forces.

Another witness, Ahmad Mimaar, told Al Jazeera that at least nine women were among those killed.

“There were two Russian strikes,” said Mimaar. “We spent the morning retrieving people from under the rubble.”

According to Mustafa al-Haj Yousef, head of the volunteer search-and-rescue organisation White Helmets in Idlib, most of those killed in the attack were women and children.

“The number of casualties is expected to go up because some of those injured are in critical condition,” Yousef told Al Jazeera. “The regime is continuing its scorched earth policy with no regards to civilian lives.

“Civilians don’t have any faith in the political process any more. There has been many summits and talks and negotiations over the past nine years, but the reality on the ground is that the Syrian regime says one thing but continues to implement a military solution.”

The attack came just hours before the presidents of Russia and Turkey meet in Moscow to discuss the deteriorating situation in Idlib and a ceasefire.

According to the White Helmets, 612 Syrian civilians have been killed by  government forces and its allies since the beginning of this year.

Mimaar said he does not expect any productive outcome in Moscow.

“There won’t be a ceasefire until the Syrian regime withdraws from Idlib and observes the 2018 Sochi agreement,” he said, referring to a deal between Ankara and Moscow that had designated the northwest province as a de-escalation zone.

Last week, Turkey launched a military operation dubbed Spring Shield in response to the killing of at least 33 of its soldiers by Russian-backed Syrian government forces.

Turkey, which supports some of the armed opposition groups, set up several observation points in Idlib that had repeatedly come under attack since the intensification of a military offensive by President Bashar al-Assad’s military and its allies last December.

Turkish President Recep Tayyip Erdogan warned the Syrian government to withdraw from Idlib as part of the Sochi agreement by the end of last month. However, the fighting has escalated, with Turkish forces downing at least three Syrian government planes over the past few days.

Meanwhile, two other Turkish soldiers were killed on Wednesday, bringing the total death toll since February to more than 50.

Yet Raja Androon, a 65-year-old Syrian woman from Idlib whose two sons were killed by Syrian government forces and now lives in Antakya, said she is not optimistic about the outcome of the talks.

“The talks may result in less fighting, but I’m not holding my breath for the Syrian regime to get out of Idlib,” said Androon. “I hope Idlib will come under autonomous rule, and not fall under Assad’s control.”

Since last December, nearly one million civilians have been internally displaced to the border with Turkey, which the United Nations has described as the worst humanitarian crisis in Syria’s nine-year civil war.

The majority have struggled to find adequate sheltering, and many families are forced to camp out in the open.

More than 300 civilians have been killed in the same period, the UN said.