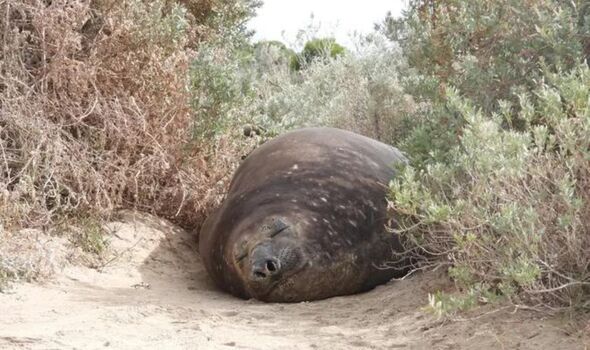 On Monday the elephant seal which caused a communication in the tourist town of Point Lonsdale, in Victoria, Australia has now reappeared on a beach in Mornington Peninsula. Last week, the seal came ashore to the town and ended up smashing the windows of a petrol station.

Last Friday, Point Lonsdale’s police department and Parks Victoria responders blocked traffic in an attempt to try and give the seal space to go back into the ocean.

However, it is believed that the seal may have been stressed, as crowds had gathered to view the seal as some believed the animal was Henry the Seal, a local famous seal who used to frequently visit the area in the early 2000s.

Glenn Sharp, a regional operations manager with Victoria’s Conservation Regulators, has confined the animal was “definitely not Henry the seal”.

He said: “It was estimated around 2003 and 2005 that Henry was around five or six years old fifteen years later, we have a seal about the same age.”

Mr Sharp has said he was part of the team trying to coax the seal away from people, but “it turned around and went up into the local service station.”

It seems people nearby were getting too close to the animal to take selfies, and other members of the Conservation Regulators reported hearing dogs bark at the seal.

Mr Sharp said: “We suspect the reason it went down the road in Port Lonsdale is because it was being harassed.”

He added that the seal went was “trying to retreat somewhere to safety.”

However, once the seal got to the petrol station, it attempted to smash windows, as it is believed the animal was confused by its own reflection and mistook it for another seal.

Mr Sharp said: “It likely saw its reflection in the glass and defended itself, that meant breaking the glass.

“Unfortunately, it did probably sustain a couple of cuts.”

Responders trying to help the seal eventually managed to lure it back to the sea by waving an oar which had been covered in flagging tape.

Mr Sharp said: “I was handed an oar, and was trying to get it back to the beach and into the water.”

He described the elephant seal as a “large, large animal” that was “actually pretty quick” despite it’s weight of 500kg, which is around the same weight as a grand piano.

The responder added: “Even though they look large and lazy on a beach, picture a 500kg animal coming towards you quickly while you are distracted.

“They do have teeth and they do bite. These things in the wild do fight over space and mates.

“There is plenty of blood and death as a result of that.”

Authorities have said to the public to keep at least 30 metres away from the seal, and 50 metres away if they have a dog with them,

Mr Sharp has said there is no suggestion that the seal has any welfare issues, but has urged to not feed the animal.

He said: “The worst thing we can do is jeopardise its return home.

“We have had scenarios … where animals did come ashore like this, and over time it started to lose weight because people started to feed it.

“The last thing we want is to make it reliant upon human interaction.”