Russian Foreign Minister Sergei Lavrov said on Wednesday that Moscow disagreed with Turkey’s position on the Nagorno-Karabakh conflict and that a military solution was unacceptable.

“We do not agree with the position voiced by Turkey, that was also expressed several times by (Azeri) President Aliyev,” Lavrov said in an interview with local radio stations. “It is not a secret that we cannot agree with a statement that a military solution to the conflict is permissible.”

Lavrov added that it would be right to deploy Russian military observers on the line of contact in Nagorno-Karabakh, but that it was up to Azerbaijan and Armenia to decide.

Also in the Haberturk interview, Aliyev sent a warning to Armenia over its pipelines.

The international community is concerned about the prospect of war because Nagorno-Karabakh serves as a corridor for pipelines taking oil and gas to world markets. Read more about that here.

08:48 GMT – Azeri leader says Turkish F-16 jets in Azerbaijan but not being used

In an interview with Turkish broadcaster Haberturk on Wednesday, Azerbaijani President Ilham Aliyev said that Turkish F-16 jets were in Azerbaijan, but that they were not being used in the conflict.

Aliyev also said Ankara, his closest ally, should be involved in talks on the breakaway region and that the conflict cannot be solved without Ankara’s involvement. 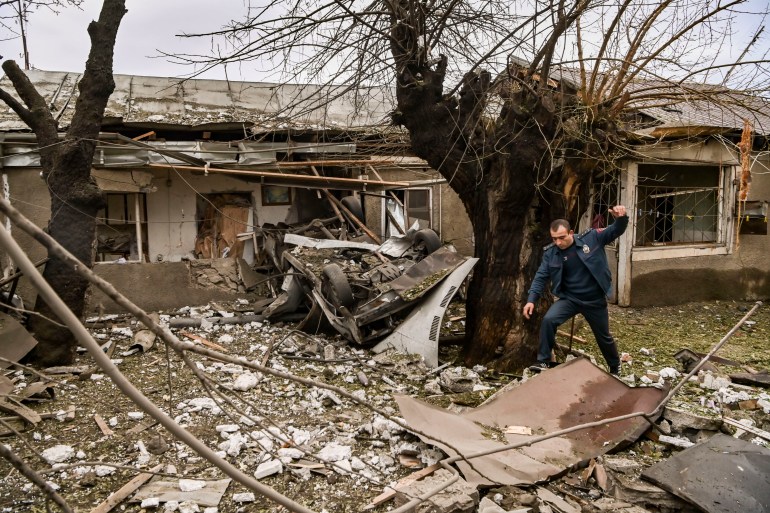 Azerbaijan’s defence ministry said on Wednesday that it had destroyed two missile launch sites in Armenia that were being used to target civilian areas.

Armenia’s defence ministry confirmed that areas inside the country had been targeted, but denied its forces were firing into Azerbaijan.

The ministry said it now “reserves the right to target any military installations and combat movements on the territory of Azerbaijan”.

The International Committee of the Red Cross director for Eurasia has called on Azerbaijan and Armenia to cease hostilities.

“We project that at least tens of thousands of people across the region will need support over the next few months,” Martin Schuepp said in a statement.

“Civilians are dying or suffering life-changing injuries. Homes, businesses and once-busy streets are being reduced to rubble. The elderly and babies are among those forced to spend hours in unheated basements or to leave their homes for safety,”

Good morning. This is Usaid Siddiqui in Doha and Anealla Safdar in London bringing you the latest updates on the Nagorno-Karabakh crisis today, Wednesday, October 14.

Here is a recap:

The latest clashes have spilled into a third week. Dozens of civilians and hundreds of soldiers have been killed, while Armenia and Azerbaijan ignore calls to honour a ceasefire they both agreed to in Russia last week.

On Tuesday, the Red Cross called on both sides to implement the terms agreed in that truce, which included them swapping prisoners and war dead.

You can find all the updates from yesterday, October 13, here.