BBC Weather forecaster Carole Kirkwood said despite continued mild weather ahead, temperatures will see a drop throughout Thursday. Rainfall is expected to impact eastern areas of the country and north-west Scotland particularly earlier on. Strong winds are set to follow in behind the weather front with gusts as strong as 41 miles per hour. The Met Office has warned drivers of tricky conditions on the roads with the likelihood of there being some brief heavy, blustery downpours as the rain moves through.

The BBC Weather forecaster said: “It is milder than it was last week but today is actually a bit cooler then it was yesterday.

“That is just a blip, the temperature will pick up again above average for the time of year as we go through the next few days.

“That is because we have that weather fronting moving from west to east bringing its rain.” 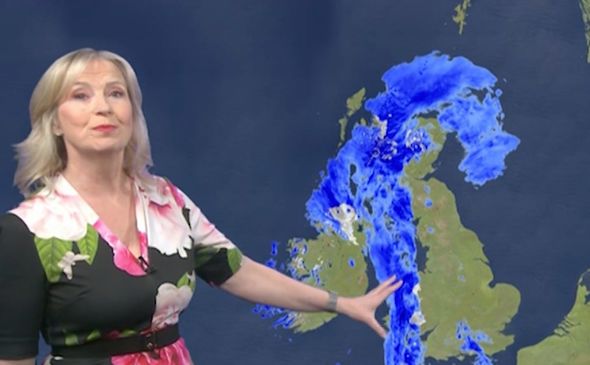 Carol Kirkwood described the weather front as “moving over the North Sea, some early showers ahead of it.

“Then behind it a lot of dry weather, some sunshine, some showers.

“But still the rain persisting across the north-west of Scotland.”

Expecting gusty winds to form across much of the UK on Thursday afternoon, she warned: “Wherever you are, you will notice them. 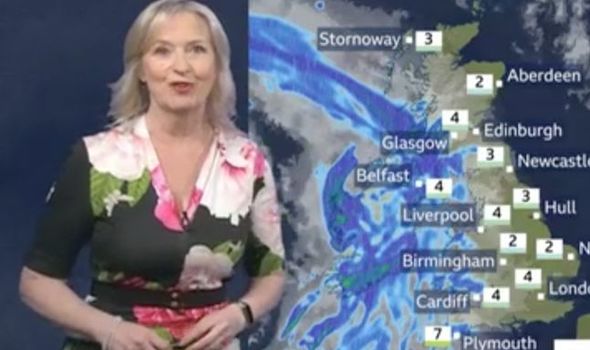 “But especially so with exposure in Western areas.”

Carole continued: “Temperature, well they are seven to about 10 degrees.

“Now through this evening and overnight we have a brief lull as the showers fade, it drys up but it’s not going to last.

“Because by the end of the night incomes as the next weather front brings some rain and strong rains with it. 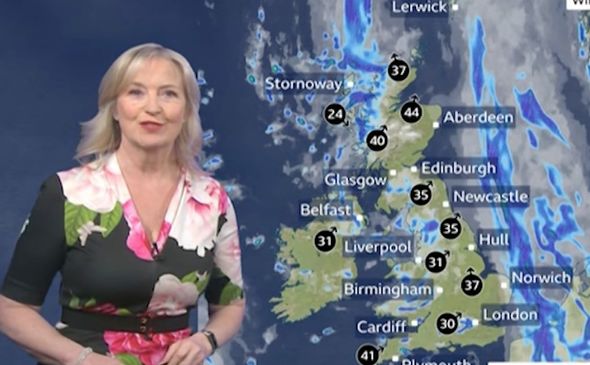 “It could be cold enough in parts of the Highlands for example, in sheltered glens, for a touch of frost.”

On Thursday forecasters also predict the possibility of snowfall in parts of the north-west.

Yellow weather warnings have also been issued for parts of Scotland.

In addition to this, South Wales and parts of South West England are also set to experience heavy downpour.