BBC Weather meteorolgist Carol Kirkwood said the UK will remain mostly dry before Storm Alex moves into the country from France. The Met Office issued a weather warning set to remain in place through Friday because of the strength of the winds forecast to hit. But despite temperatures set to drop later on Thursday, conditions are expected to remain mostly settled in the run up to the storm’s arrival.

Ms Kirkwood said: “This morning we still have a bit of rain around but for most of us today it’s going to be a drier day with lighter winds. It will still feel cool, mind you.

“What’s happening is that the weather fronts that produced all the rain yesterday are now moving in the direction of the North Sea, just about to clear Kent and East Anglia but the weather front will be draped across Shetland for most of the day so you’re going to have a wet day and also a windy one.

“But we also have a ridge of high pressure cross us, so that’s settling things down for the bulk of the UK, with a fair bit of sunshine around.

“There will be some showers though, particularly across Northern Ireland, Wales into the southwest to the Midlands later on. And they’ll be slow moving, some of those could be heavy, potentially with some thunder and hail as the rain pushes right back up, turning lighter in the northwest of Scotland. 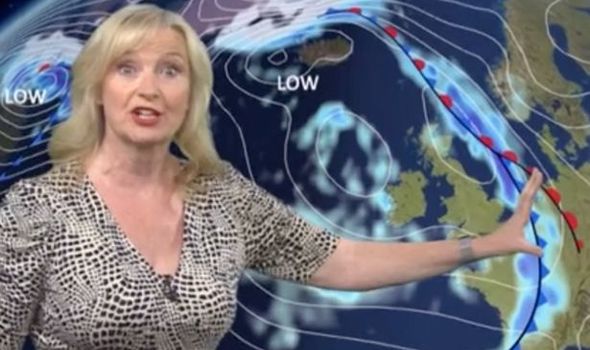 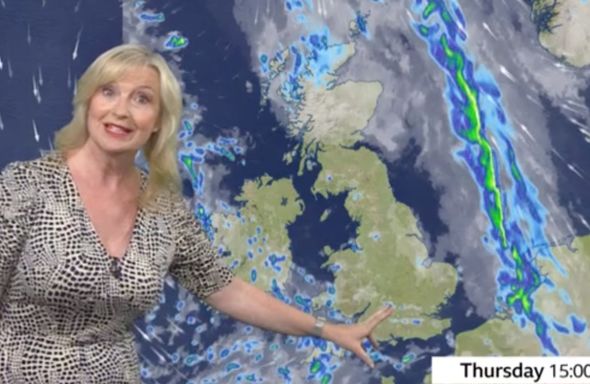 “Temperatures 10C to 15C so it’ll be cooler than yesterday.”

The BBC Weather forecaster said rain will persist through the evening and overnight, with temperatures expected to drop to below 0C in some areas.

The deep area of low pressure will also slowly move into the UK, bringing heavy rain and strong winds with the potential of causing major disruption.

Ms Kirkwood said: “This evening and overnight we hang on to those showers across southern and western areas. Some clear skies though and that means temperatures are going to drop. 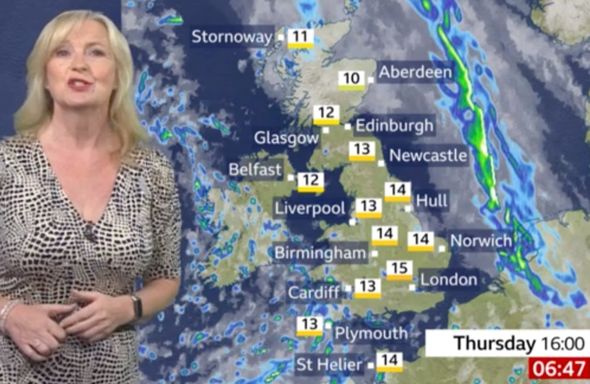 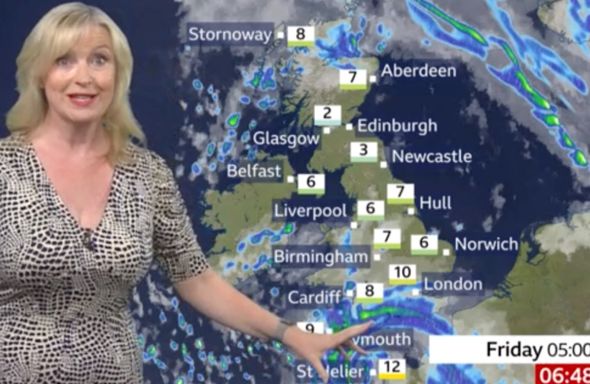 “In fact, they could be below freezing around the borders in across northern England. At the same time, we’ve got a deep area of low pressure moving in from France.

“Now, the French Met Service have actually named this Storm Alex and it’s going to bring some heavy rain and some gusty winds with it as it move northwards.

“So there’s a weather warning out for this at the moment. 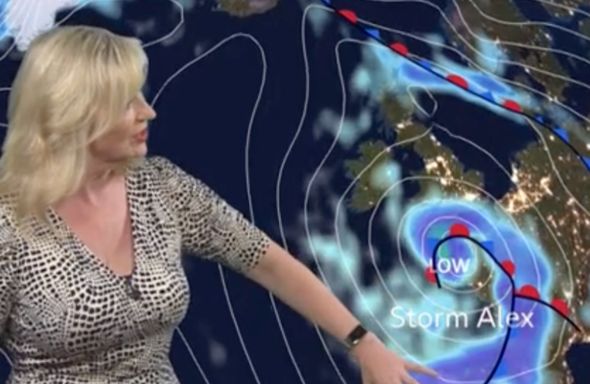 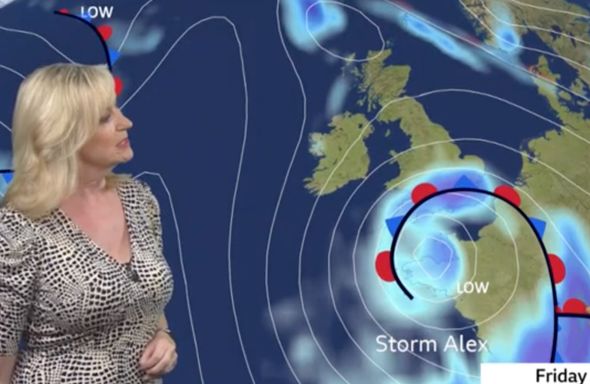 She added: “It’s going to be moving northwards during the course of Friday, taking its rain and gusty winds with it in doing so.

As we push further north, for northern England, Scotland and Northern Ireland, a much quieter day for you with some sunshine.

“In about 12 to 18 hours we could have 14-15 mm of rain, that’s up to two inches, that could lead to some disruption, some flooding, coupled with the wind.

“And during the day it will slowly move away from the south.”

The Met Office’s yellow weather warning will cover the whole of Cornwall as well as most of the southern coast of England.