Heavy rain and thunderstorms will sweep across parched areas of England and Wales early next week, according to the latest BBC weather forecast. The Met Office has issued yellow weather warnings of intense thunderstorms and possible flooding following the extreme heatwave this weekend. This comes just a day after an official drought was declared due to low-water levels and tinder-dry conditions.

Eight parts of England, including Devon, Kent, East Anglia, and Lincolnshire are affected by the drought.

BBC meteorologist Sarah Keith-Lucas pointed to a chart that shows London has not seen rain for 22 days, while it has been 43 days for Odiham, in Hampshire.

Looking at the days ahead, she said: “We are looking at a mostly dry weekend, with no useful rainfall over the next couple of days where we could really do with it.

“But there are a few showers in the forecast for next week.”

JUST IN: Huge blow for Sturgeon as SNP loses one of the biggest councils 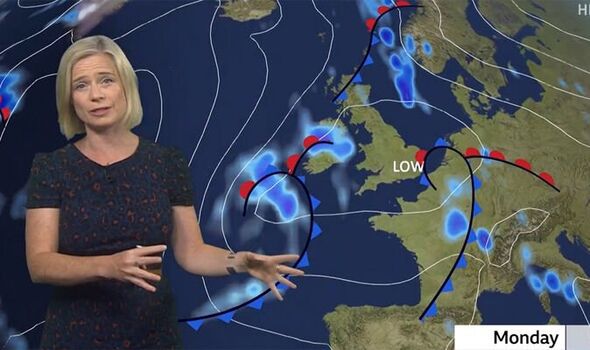 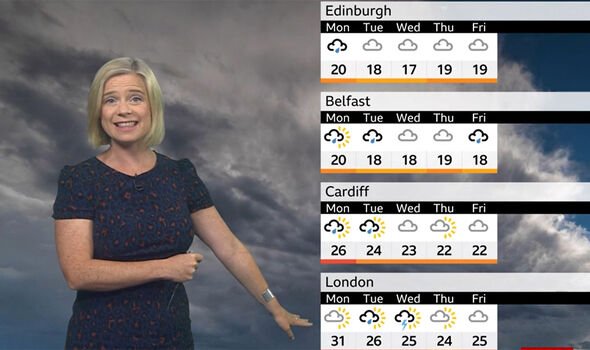 This weekend will see temperatures in the mid-20s across Scotland and Northern Ireland, where low clouds will feature.

She added: “But elsewhere strong sunshine will be lifting temperatures into the 30s across England and Wales, with 36C the high temperature in the southeast today.”

The UK is in the grip of extreme heat, with amber warnings in place until Sunday for most of England and Wales.

However, Ms Keith-Lucas suggested “a hint of things starting to change” takes place on Sunday.

Drought to be declared for some parts of England 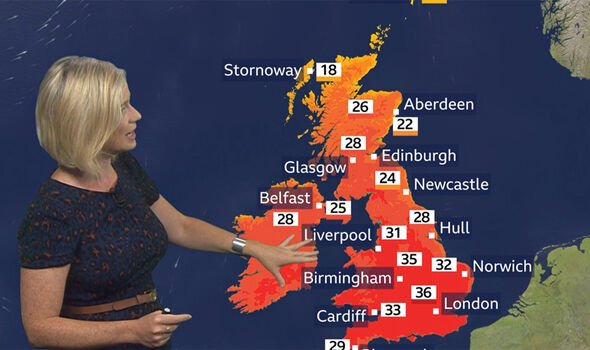 She explained: “A few showers will move into the west of Scotland, Northern Ireland, and one or two showers in the far south-west of England.

“They could be heavy and thundery, large hail as well.”

Monday will see “a change on the cards” as the “showers become more extensive”.

The BBC meteorologist added: “They are hit and miss. We will not all see the rain we desperately need.

“But we have unsettled weather on the cards; with showers forecast in London on Tuesday and in Cardiff on Monday.

“These could be heavy, thundery rain where it lands, bringing the risk of localised flooding.” 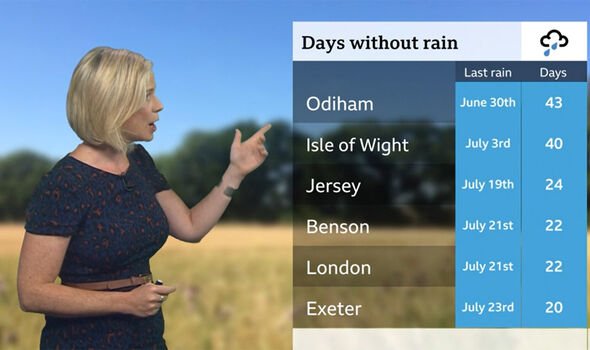 The Met Office warned that the rain could be “the wrong type” for the drought-affected areas.

The Met Office stated: “Intense and thundery showers bring with them the chance of some surface water flooding, falling onto dry ground and often failing to be absorbed.”

“There’s a chance of some quite intense downpours at times for some areas and we’re refining the likely location of these in the coming days.”