BBC Weather forecaster Darren Bett warned that central Europe could see heavy rain and thunderstorms as we head into the weekend. Despite this, temperatures are still expected to remain high with Spain and parts of southeastern Europe seeing the warmest weather. Mr Bett said: “The Mediterranean still looks dry through the rest of the week.

“Higher temperatures are in the west towards parts of Spain.

“Further north much more changeable weather comes across the UK into Scandinavia where it is still quite cool.

“Along that weather front all the way from the Pyrenees across the Alps into the Balkans we are going to see some heavy and thundery showers breaking out.”

The BBC Weather forecaster noted that despite these showers and storms, the temperatures will remain relatively high. 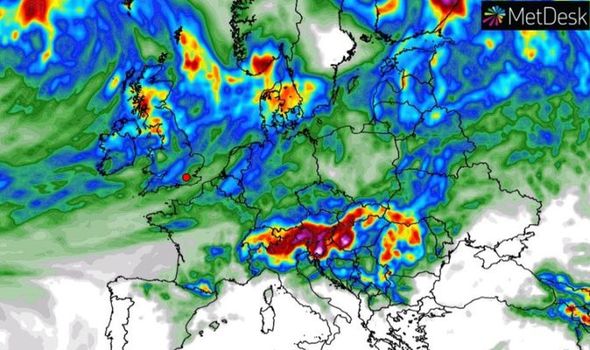 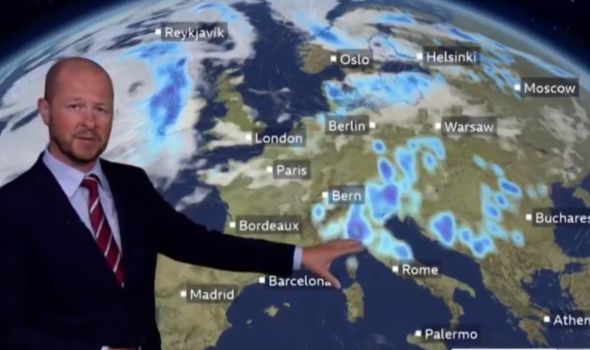 Most of central Europe will see temperatures above 30C on Thursday going into the weekend.

Mr Bett continued: “Wetter weather leaves the UK by Friday and heads into Scandinavia and it will be picking up serious winds through the Baltics.

“We have still got these storms breaking out particularly across northern parts of Italy.

“As you head to the southeast of Europe it is dry and sunny and near-normal temperatures for the time of year.” 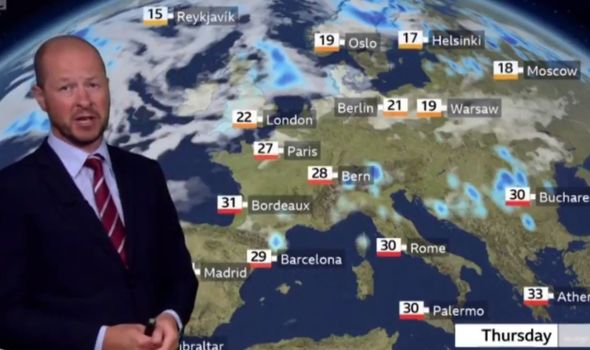 Temperatures in this area will be similar to that of central Europe with many places seeing highs in the 30s.

Greece will see some of the hottest temperatures in this area and by Friday could reach 35C.

Mr Bett added: “Those showers will be heavy and thundery and accompanied by very gusty winds.

“High temperatures particularly in Spain and some of that heat will be pushing into France. 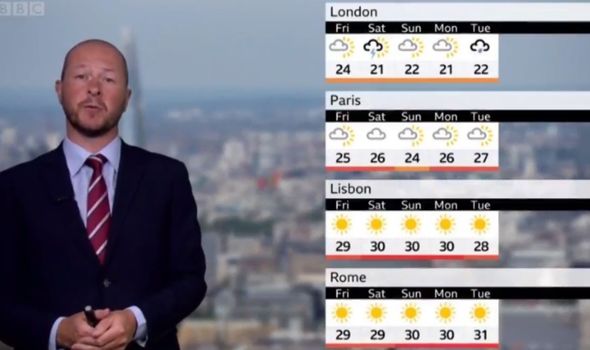 “Across Scandinavia into those Baltic states things are very unsettled and things will be rather cool.”

In London over the weekend temperatures are expected to drop slightly and this trend is set to continue into the new week.

Paris will see a slight increase in temperature in the new week and could reach as high as 27C by the middle of next week.

Both Lisbon and Rome can expect sunshine over the next few days and temperatures around 30C.