The BBC Weather forecaster said the week will start off dry but the low cloud will cause some frost to return in the early mornings. Carol Kirkwood noted most regions will experience a fair bit of sunshine once the cloud lifts but noted temperatures will have fallen compared to the weekend. Ms Kirkwood said: “First thing this morning, here’s the low cloud, the mist and the fog. Through the morning it could well extend as far west as eastern parts of Wales but should break up its southern boundary and the sun will come out.

“There will be a lot of dry weather, a fair bit of sunshine, there’s cloud across northern Scotland pushing north into the Northern Isles.

“Temperatures between 7C and 11C. And those are the temperatures if you’re stuck under the low cloud, mist and fog for much of the day.

“Through this evening and overnight, if anything, the low cloud, mist and fog become more extensive. Over towards the west, there’ll be some breaks in the cloud and that means temperatures will fall here to the lowest values.”

Ms Kirkwood continued: “It looks like there’s going to be some frost around as well but whichever way you look at it, if you’re stepping out first thing in the morning, it is going to feel a bit chilly. 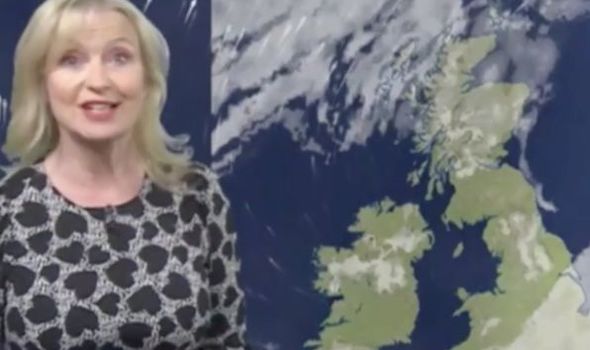 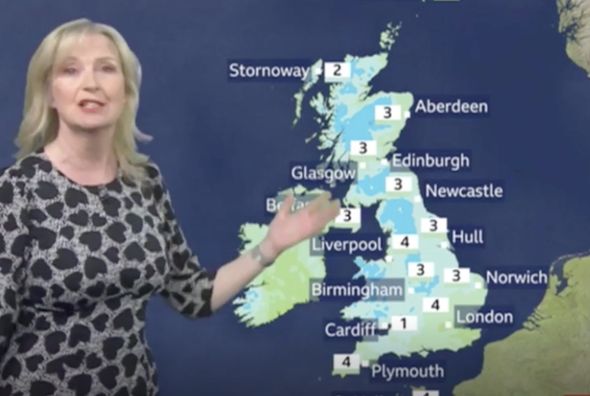 “Through tomorrow, high pressure is still with us, drifting into the North Sea a bit more, still breezy along the south coast and then we have this little frontal system approaching, which will introduce some showers.

“We start off with all this low cloud, mist and fog. Towards the west, this is where we’ll see the best of the breaks, later in the day we could see some of those across southern areas as well and the sunshine will come out.”

“Some of those showers coming in across the southwest will extend into South Wales, we could see one or two across the Midlands. They can also be heavy and thundery.” 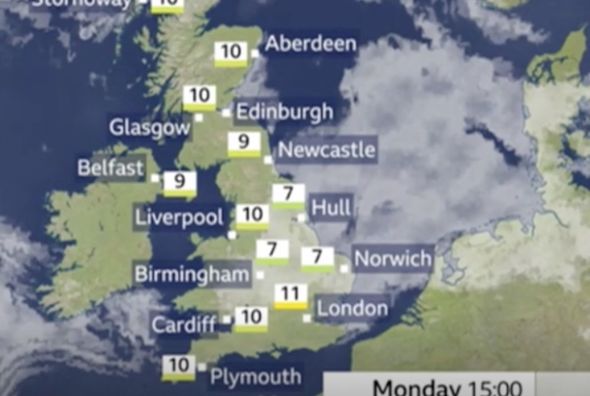 It will once again be cloudy on Wednesday after a widespread misty and foggy start.

Light showers should move eastwards into Wales and south-west England during the morning and they move across to south-east England in the afternoon.

Cloudy, with patchy rain in the south-east of England and east of Scotland on Thursday.

Brian Gaze at Weather Outlook warned winter could return to the UK from next week, with an “increasing Atlantic influence” hitting by the middle of March. 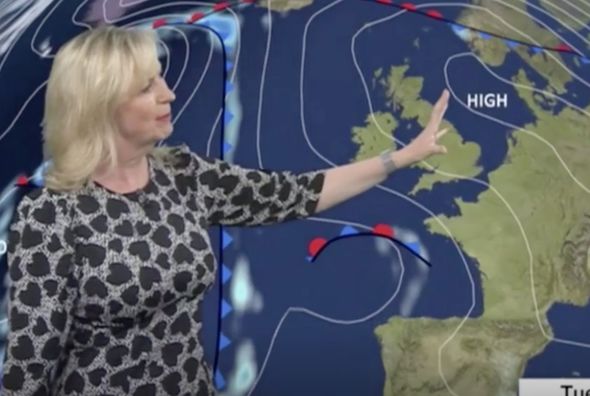 Mr Gaze said: “The meteorological winter ends tomorrow but the second half of next week could see it turn colder as high pressure builds northwards.

“High pressure looks set to remain in charge of the weather across the UK during the coming days. We’re at the time of year when frost can readily develop at night, but the strong sun can lead to mild or even relatively warm afternoons.

“A big diurnal (day to night) variation in temperature is very possible.

“The London GEFS 06z plot illustrates things well. The bottom part of the plot shows the precipitation forecast and it is looking dry during the first third of March.

“The number of rain spikes begins to increase towards the middle of the month perhaps suggesting an increasing Atlantic influence.”