The Met Office have alerted people queueing to see Queen Elizabeth II lying in state to be prepared for freezing nights as the temperature is expected to drop to 6C degrees tonight. Tens of thousands of people have joined the queue to enter Westminster Hall and pay their respects to the late monarch. Those waiting in the queue faced temperatures of 7C just before 7am on Saturday, at which time the official queue tracker advised the public not to make the journey.

Despite regularly checking the tracker, mourners went against advice to travel to pay their respects to the late monarch.

Tonight and in the early morning hours of Sunday, the last day of the Queen’s lying in state, the temperature is expected to drop even further, with Met Office forecasters warning over lows of 6C degrees in the English capital.

In an update on Twitter, the UK’s national weather service said: “If you are planning to attend Her Majesty The Queen’s Lying-in-State or State Funeral in London please be prepared for the weather, particularly the chilly nights.“

British Weather Services senior meteorologist Jim Dale explained that the freezing nights are a result of the northerly air stream, and warned mourners to be armed with hats and gloves. 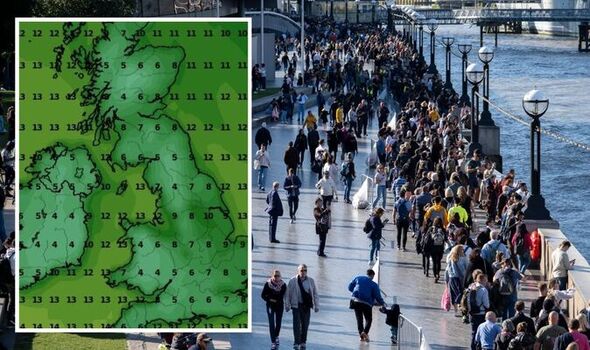 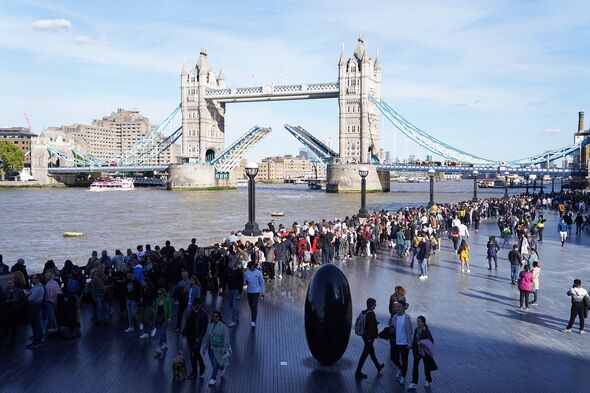 He told Express.co.uk: “It was around 7-8C degrees on Friday night and we will get about the same tonight. So it’s cold. It’s jumper weather, it’s gloves weather, it’s hat weather – all of that.”

And he continued: “But it will be dry – and the reason is that we have a northerly air stream with polar air attached to it. It occurs at this time of year particularly.

“And by the time we get to Monday, it’ll still be cold in the mornings. At around five, six o’clock, those queued up in the overnight will feel it and they will need what I’ve just mentioned in terms of clothes.

“However, it doesn’t take too long for the sun to rise. So by roughly 10 o’clock, things are warming up nicely and become pleasant.” 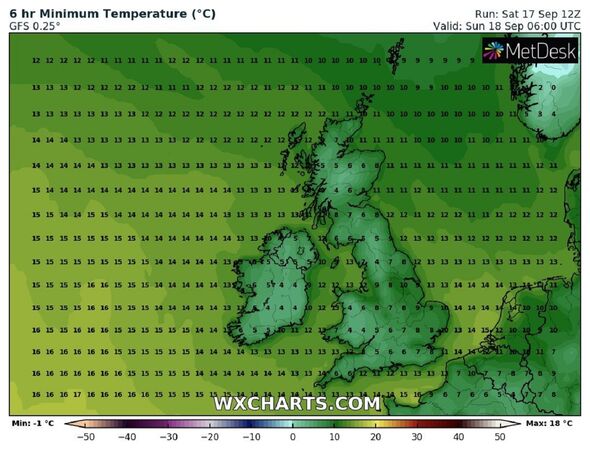 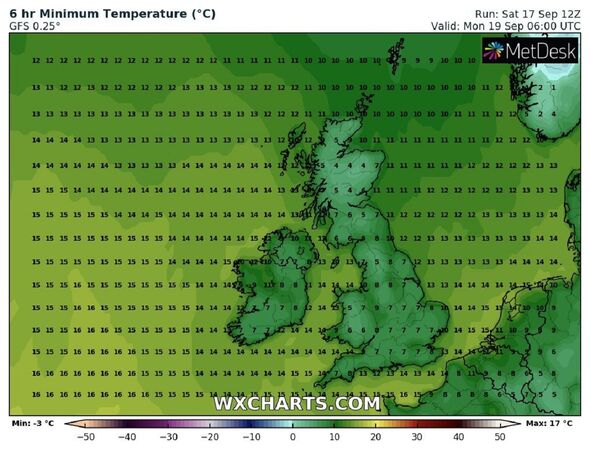 Temperatures in London will be from 18C degrees Celsius down to 8C degrees on Sunday.

On Monday, the day of the Queen’s funeral, the temperature will peak at 19C degrees with the lowest being 9C degrees.

Across the rest of the country, the weekend will see chilly mornings and evenings, but most areas will be fine and dry with sunny spells throughout the day, according to the Met Office forecast for the mourning period.

Cloudier skies and some showers will affect parts of northern Scotland and some eastern coasts of England on Saturday, these expanding to Northern Ireland and Irish Sea coasts on Sunday, perhaps with a few showers inland into the Midlands. 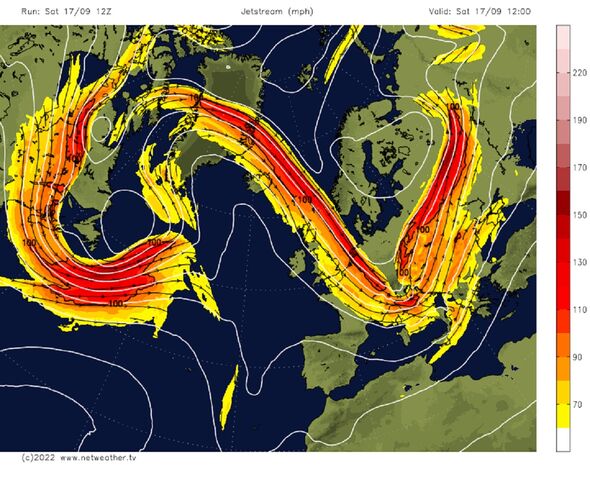 A chilly breeze in the east still, elsewhere feeling a little warmer than Friday in the sunshine.

Nights will be cold where skies are clear, with perhaps just a touch of frost in the coldest rural places.

The settled spell of broadly dry and fine weather is likely to continue into the start of next week with high pressure remaining dominant across the UK. On Monday, most places will be fine and dry with some sunny spells.

However, the odd light shower may affect parts of England and cloudier skies and some rain are expected to move into western Scotland during the day. Still cool by day and night but feeling a little warmer than the weekend with lighter winds.