It’s a month since one of the largest explosions in history ripped through Beirut.

The investigation into what happened is moving slowly; accountability is far away. The political situation in Lebanon remains very fragile. So what about the people and how are they coping?

Here, a doctor and a musician tell Sky News about the day their city changed and what their prospects are now. It seemed like a normal working day. After a while we start seeing this hangar on fire and it’s really close by. My office is overlooking the harbour and there is a small window that’s right in front of me and we were just looking at it.

After a few minutes we start seeing black smoke coming out. All I remember after is seeing sparks, and in a few moments, in a few seconds, everything just blew up.

My face was burning. I don’t remember what was happening to my face but it was burning. For a good five minutes I was just on the floor, just shaking because I didn’t know what was what.

I went down the stairs, the stairs is 90% just all blood. I could see my colleagues all going down the stairs, and they all have blood everywhere. We’re just trying to see who’s okay, who’s missing, who’s able to walk.

Because at first no one knew what was going on, everyone thought that I thought that we were only affected. I didn’t know the size of this explosion and the size of the damage until I was able to get up and go down to the street. It wasn’t until then that I realised how huge this is. 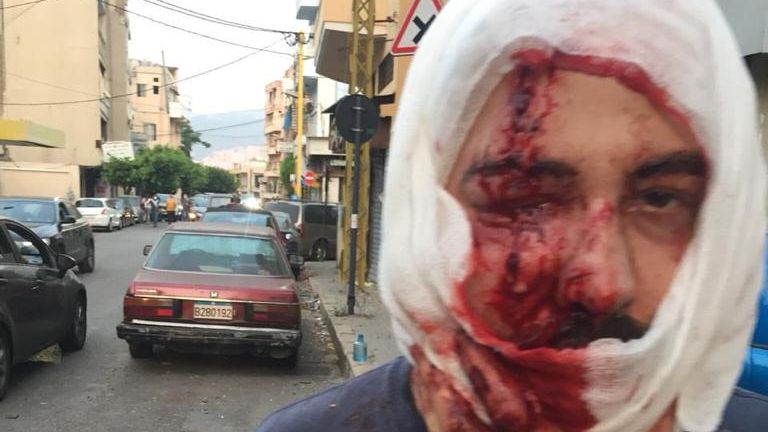 I could feel my face burning; I didn’t know exactly what happened. I could see my finger was all torn up, so at that moment we just went down and started walking just to try to get to a hospital.

I was lucky there was someone with a jeep who was driving by who said “hop in, I’ll take you to Geitaoui [hospital]”.

It was just overflowing with people. People were on the floor and most of the people had damages way more than I had.