Democrats hope to include climate and clean energy in a second bill. It could be Biden’s last chance to pass major global warming legislation. 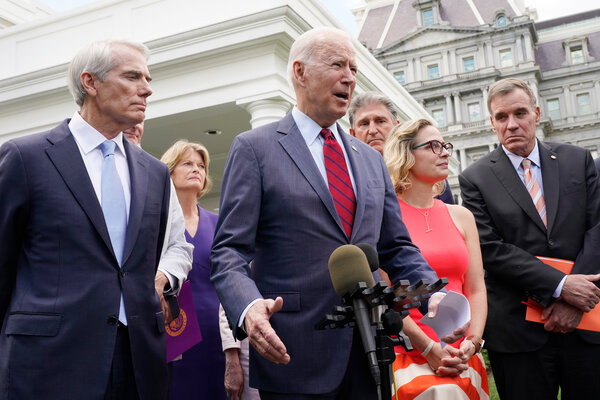 By Coral Davenport and Lisa Friedman

WASHINGTON — A $579 billion deal reached Thursday between President Biden and a bipartisan group of senators to repair the nation’s roads, rails and bridges does relatively little to fight climate change, an issue that the president has called an “existential threat.”

The deal does provide funding for public transit, passenger and freight rail, electric buses and charging stations for electric vehicles, all designed to try to reduce pollution from passenger vehicles and trucks. And it includes $47 billion to help communities become more resilient to disasters and severe weather caused by a warming planet.

Still, it contains few of the ambitious ideas that Mr. Biden initially proposed to cut the fossil fuel pollution that is driving climate change.

The president had hoped to use a sweeping infrastructure bill as a vehicle to enact a national “clean electricity standard” requiring power companies to gradually ratchet up the amount of electricity they generate from wind, solar and other sources until they’re no longer emitting carbon dioxide. That is not included in the bipartisan bill, nor are the hundreds of billions of dollars in spending on tax incentives for wind, solar and other clean energy.

Democratic leaders and environmentalists are hoping those proposals can be included in a separate infrastructure bill that would pass through a fast-track process known as budget reconciliation. That process would not require Republican support and could be enacted with a simple majority vote.

But that’s a difficult proposition, as Senate rules require that legislation enacted through the reconciliation process pertain directly to federal revenue — such as taxes and spending. The Senate parliamentarian could determine that a clean electricity standard does not qualify.