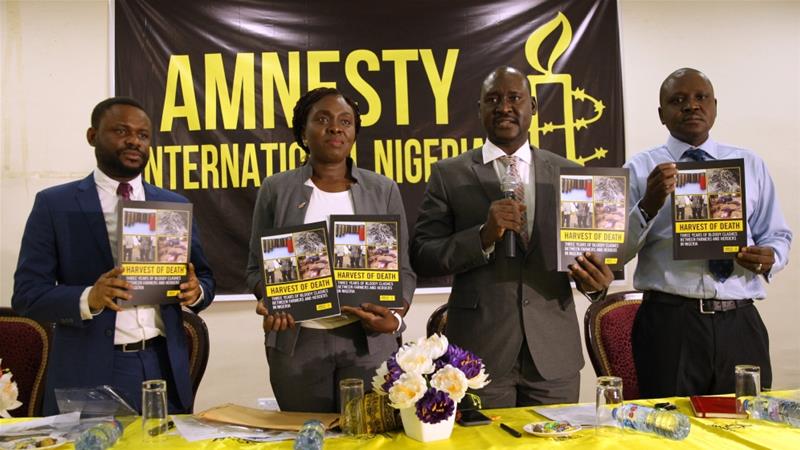 Armed group Boko Haram killed at least 60 people when it renewed its attack on the northeast Nigerian town of Rann on Monday, rights group Amnesty International has said.

“This attack on civilians who have already been displaced by the bloody conflict may amount to possible war crimes, and those responsible must be brought to justice,” Osai Ojigho, Amnesty International’s Nigeria  director, said in a statement on Friday.

“Witnesses told us that Nigerian soldiers abandoned their posts the day before the attack, demonstrating the authorities’ utter failure to protect civilians,” Ojigho said.

The attack, one of the bloodiest in Boko Haram’s decade-long conflict, came two weeks after it had overrun the same town, driving out Nigerian soldiers and marking its re-emergence as a force capable of taking army bases.

A security source told Reuters news agency that Nigerian troops had returned to Rann, as well as Cameroonian troops from a Multi-National Joint Task Force, after the first attack, on January 14.

After the Cameroonians went back across the border, the Nigerian soldiers left, because they didn’t have enough troops, weapons or equipment, the source said.

More than 27,000 people have been killed and some two million others displaced in Nigeria’s northeast alone in the past 10 years due to the violence.

The conflict has spilled into neighbouring Niger, Chad and Cameroon, triggering a dire humanitarian crisis in the region.

Nigeria’s presidential election is scheduled for February 16 but insecurity is rampant across Africa’s most populous nation – with 190 million people – and its largest oil producer.

The bloodshed is a challenge for President Muhammadu Buhari as he seeks a second successive four-year term.

Buhari, who was also Nigeria’s military ruler for 20 months in the 1980s, was elected in 2015 partly on a promise to restore security.

In the northeast, a surge in attacks by Boko Haram and its offshoot, Islamic State West African Province, is throwing election plans into chaos.

Tens of thousands of people have fled their homes since December in a region already sheltering 1.8 million displaced people, according to United Nations figures.

In Nigeria’s central states, clashes between farmers and nomadic herders over dwindling arable land have killed thousands of people and displaced tens of thousands more.

Thousands have also fled in the northwest, rendering swaths of the region inaccessible even to the military.

Election observers worry that people streaming into displacement camps could exacerbate vote-rigging. There was widespread vote-buying in such camps in the 2015 election.