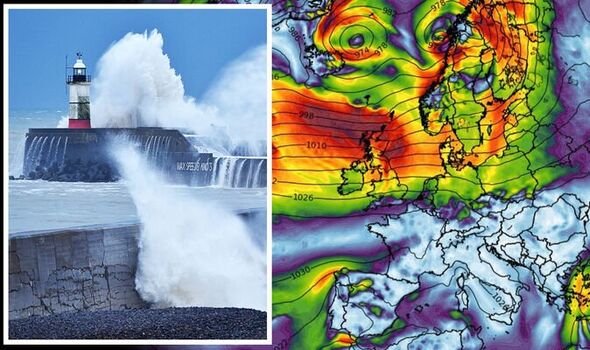 The threat of 80mph gusts on Wednesday has sparked warnings for travel disruption, damage to buildings and ‘flying debris’. Met Office alerts are in force through this morning although Britain is in the firing line tonight for another violent low-pressure system.

Atlantic weather fronts will jolt the jet stream whipping up wind and rain through much of the week.

Jim Dale, meteorologist for British Weather Services, said: “The jet stream is going to get an extra kick as weather fronts come in off the Atlantic associated with an intense low-pressure system.

“The worst of the rain will be on Wednesday from an attack by a deep low-pressure system, and there will be a secondary low associated with this.

“Rain in Scotland will last around 24 hours, and another system comes in on Wednesday night bringing more wind on Thursday morning.”

Government meteorologists are keeping a close eye on the deepening low which could stir up gusts of up to 80mph–hurricane-force on the Beaufort Scale.

Scotland, northern and western Britain, which will be closest to cyclonic feature as it sweeps through, will bear the brunt of the assault. 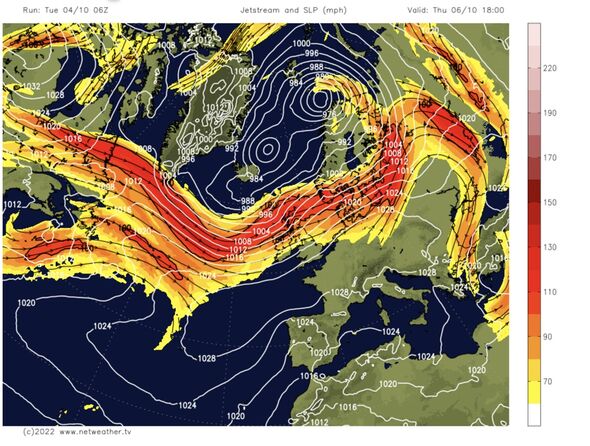 Southwestern Scotland faces the additional danger of torrential rain, with more than three inches forecast by the end of Wednesday.

Mr Dale said: “This system is going to bring the risk of flooding to the worst-affected regions, and people should be ready, particularly in prone regions such as valleys and glens.”

Humid air blowing in from the Atlantic will give temperatures a boost in parts of eastern Britain which could hit 20C today.

However, thermometers will drop by this evening thanks to chilly air dragged in behind a cold front, according to the Met Office. 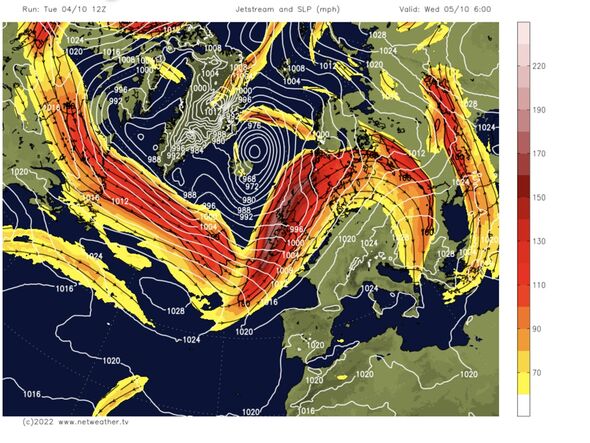 Meteorologist Alex Deakin said: “It is not just turning wet but also turning very windy, but the wet and windy weather is going to keep temperatures up.

“It won’t be a cold start to Wednesday, but it won’t be a very pleasant start, a lot of spray and a lot of surface water on the roads and very gusty winds.

“We have a broad yellow warning in place for gusts of 55mph to 65mph that could cause some disruption, but If that low is a little more intense, it could produce more significant winds of 70 to 80mph over a smaller area.”

A band of rain will sweep eastwards through today before clearing this evening to leave brighter skies, he said.

However, northern and western regions are in line for more rain tonight and tomorrow, he warned.

He said: “The wet weather will swing its way eastwards getting to East Anglia and the southeast by the early part of the afternoon.

“It will be followed by brighter skies, although there will be plenty of showers through the afternoon and into the evening.

“There will be plenty more showers coming in across northern and western parts and that’s how Thursday is looking, too.” 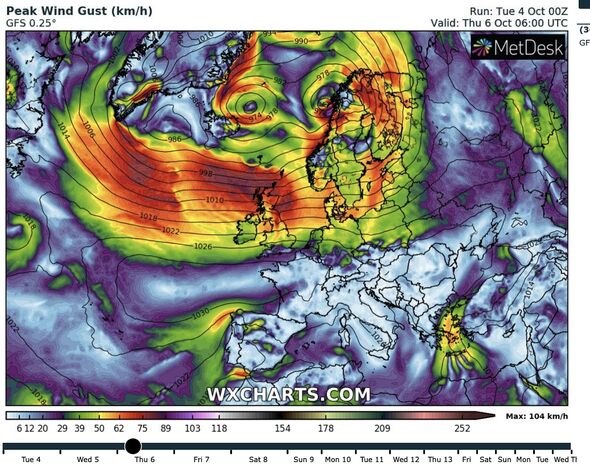 But after a choppy few days, the weather will turn more settled by the weekend, according to Weathertrending’s John Hammond.

He said: “As we end the week, the jet stream’s track will become more distorted.

“This will allow high pressure to build more prominently from the west by the weekend.

“Lengthier windows of dry weather will give pleasant autumn sunshine by day, but some more chilly nights can be expected, with touches of frost and patches of fog.”